Michael Madesker of Canada is a fellow of the Royal Philatelic Society London and The Royal Philatelic Society of Canada. He is also a signatory of the Roll of Distinguished Philatelists and is motivated by his passion for youth philately. Between 1960 and 1975, Madesker was a frequent guest of Doug Patrick’s CBC Stamp Club, which gave him the opportunity to share his knowledge and establish his interest in working with young people. His devotion to youth and humanity was exemplified in the work he did with the disabled and underprivileged as he taught philately seminars and workshops in the local hospital and libraries. Due to the success of these programs and in conjunction with the Fédération Internationale de Philatélie, Madesker directed the International Youth Exhibitions in Toronto and Montreal. In 1992, he was elected to the Presidency of the Fédération of Internationale de Philatélie Commission for Youth Philately, serving an unprecedented three terms ending in 2004. During his tenure, he helped to establish a philatelic program in Asia, similar to the one he created in Canada. Madesker is the recipient of the Queen’s Silver Jubilee Medal and the Royal Philatelic Society of Canada’s President Medal for Outstanding Philatelic Achievement, among countless others. 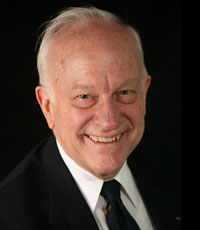 Robert P. Odenweller of the United States is a researcher, writer and judge. His national and international leadership in each role has demonstrated his exceptional knowledge and expertise while he has mentored scores of now-accomplished philatelic leaders. His research has produced the seminal works The Postage Stamps of New Zealand: 1855-1873: The Chalon Head Issues and The Stamps and Postal History of Nineteenth Century Samoa. In addition, he has written many exceptional articles, and his exhibits have won the American Philatelic Champion of Champions and the Fédération of Internationale de Philatélie Grand Prix d’Honneur. Odenweller edits the Collectors Club Philatelist and was governor for the Board of the Collector Club of New York, president of the Fédération of Internationale de Philatélie Commission for Traditional Philately, director of the American Philatelic Society board, director of the International Association of Philatelic Experts and on the board of trustees of the Philatelic Foundation. Odenweller signed the Roll of Distinguished Philatelists and received the Alfred. F. Lichtenstein Memorial Award. He holds honorary fellowship in the Royal Philatelic Society London, the Royal Philatelic Society New Zealand and is a Distinguished Philatelist of the U.S. Philatelic Classics Society.