2018 marks the centennial of airmail service in America. Initially, the planes flew just one route to and from New York to Washington, D.C. (with a stop in Philly to refuel). But Post Office Department officials were determined to add another route from New York to Chicago, Illinois despite tremendous danger and a lack of supporting infrastructure. In a three-part series, Nancy Pope shares the captivating history of these pioneering flights. Catch up on Part I - A Difficult December: Setting Up a Route - and stay tuned for Part III!

To make an airmail route between New York and Chicago a success, the Post Office Department needed planes with more powerful engines, larger cargo holds and longer range. With the war over, Secretary of War Newton Baker promised to deliver 100 de Havilland-4 and 12 twin-engine Hadley Page airplanes to the Post Office Department at the rate of one plane every 10 days. He also agreed to deliver 12 twin-engine Martin bombers at the rate of one a month. Neither Baker nor Praeger knew if any of those planes were up to the rigors of airmail service. On December 4, 1918, Praeger gave the House Post Office Committee a start date: December 15.

Superintendent of the Airmail Service Benjamin Lipsner took four of his pilots down to Houston, TX to take delivery of Curtiss R-4 airplanes from the Army Air Service. The pilots had nothing but trouble with those planes. Max Miller complained that the plane's 200-hp Curtiss engine was not powerful enough. Eddie Gardner did not have any better luck. Louis Gertson flew his plane into the trees at the end of the airfield, wrecking it. Lipsner refused delivery, saying the planes could not carry the mail. He also announced that the New York-Chicago route would have to be abandoned, contradicting both his supervisor, Otto Praeger, and Postmaster General Albert Burleson, and angering both. 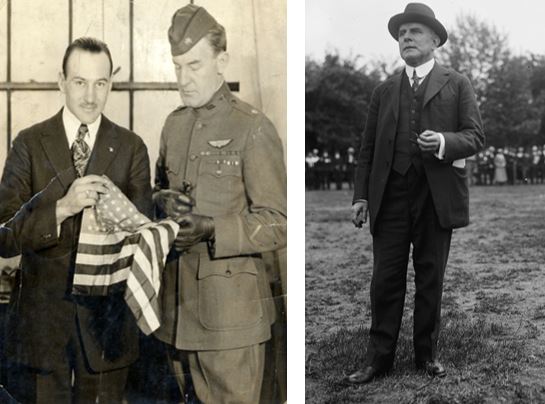 Left: Superintendent Benjamin Lipsner, presenting a flag flown by airmail service to Maj. Cushman A. Rice, a friend from Lipsner’s days in the army.
Right: Second Assistant Postmaster General Otto Praeger on the DC Potomac Park airfield on the first day of airmail service, May 15, 1918.

The Army began transferring some of its de Havilland-4 aircraft to the Post Office Department. Most of these planes had seen little action. The two-seat craft were designed by British engineer Geoffrey de Havilland to serve as either bombers or reconnaissance planes.

Although postal officials were eager to get going, many issues kept delaying the operation. Among them was the resignation of Lipsner on December 6. He and Praeger had never gotten along and their disagreements had become more frequent. Praeger had given plum assignments of setting up the new route to others, almost shutting Lipsner out of the process completely.

Lipsner did not go quietly. He publicly accused both Praeger and Postmaster General Albert Burleson of illegal activities with regard to the airmail service. Praeger was furious. A flurry of accusations appeared in Washington and New York newspapers as both sides made their case in public. 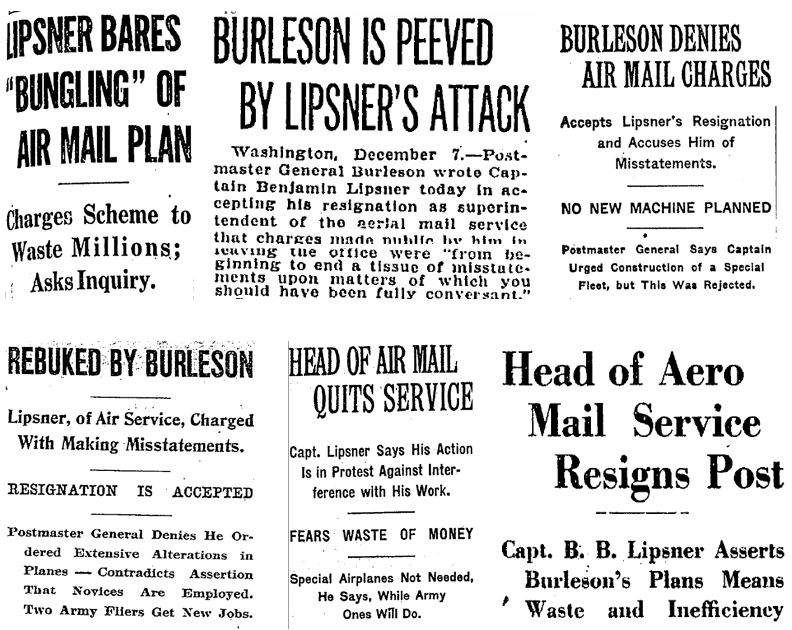 Just a few of the newspaper headlines from December 1918 covering the Lipsner-Burleson showdown.

Burleson not only denied all of Lipsner's charges, he addressed Lipsner directly in the New York Times: "The two officials…who succeeded you…are aviators, which you are not, and have had experience in field management and supervision, which you had not when you entered the service." The Times and other newspapers ran Burleson's denials and counter accusations, seeming to fall in line behind the Postmaster General.

Lipsner turned to Congress. He claimed Burleson had stock in the Glenn Martin manufacturing plant that the Post Office Department was supposedly selecting to build airmail planes. Lipsner also claimed Burleson and Praeger hired men with no flight experience for the airmail service. That was an odd charge coming from Lipsner, who himself had no flight experience when Praeger hired him. Burleson had spent several years in Congress as a representative from Texas before President Wilson named him Postmaster General. He retained several friends there and while headlines hinted at inquiries based on Lipsner's accusations, no action was taken.

Unfortunately for Praeger, the Lipsner troubles distracted him from his preparations for the new route. Work lagged behind everywhere. John Jordon, tasked with securing airfields along the route, reported that the Cleveland hangar would not be ready until Dec. 23. In addition, the company hired to make necessary modifications to the army's de Havilland-4 airplanes had not made their delivery dates. Unwilling to bend too far, Praeger told Jordon to get the Cleveland hangar ready sooner and announced to the public that the first flights would take place on December 18, 1918.