His Royal Highness The Duke of York visited the Smithsonian’s National Postal Museum to view “The Queen’s Own: Stamps That Changed the World,” an exhibition of materials from his mother Queen Elizabeth II’s own Royal Philatelic Collection. The collection is considered the finest and most comprehensive holding of British and Commonwealth stamps in the world.

The Royal Philatelic Collection was begun in the late 1800s by Queen Elizabeth II’s grandfather, the Duke of York, who became King George V in 1910. King George VI later added significantly to the Collection, as has the Queen. The exhibition will remain on view at the National Postal Museum through January 11, 2005. 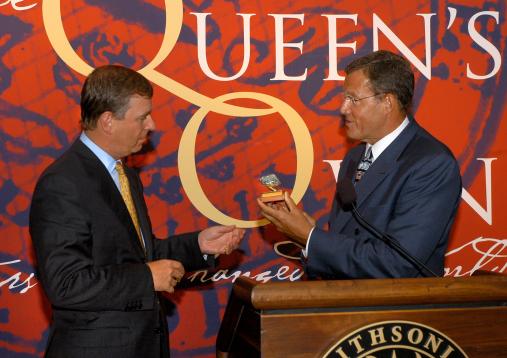 Smithsonian Secretary Lawrence M. Small presents His Royal Highness The Duke of York with a piece of smithsonite

Smithsonian Secretary Lawrence M. Small presents His Royal Highness The Duke of York with a piece of smithsonite. Smithsonite is a mineral named for British scientist James Smithson, founder of the Smithsonian Institution.

The Queen’s Own
Back to Top