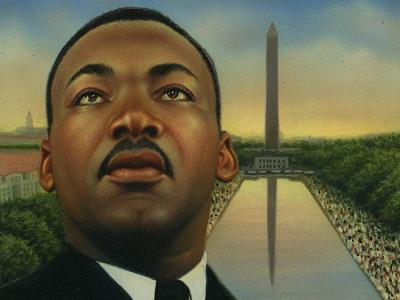 A chronicle of the African American experience told from the perspective of stamps and mail. Includes letters carried by enslaved Americans, mail to and from famous leaders of the civil rights movement, and a significant selection of original artwork for the USPS Black Heritage stamp series from the Postmaster General’s Collection. 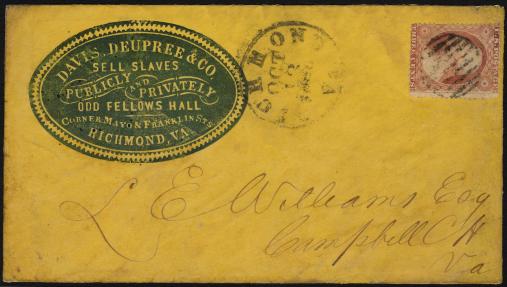 Richmond, Virginia was the center of the domestic slave trade on the eve of the Civil War. Despite the large volume of mail that must have been sent by slave dealers, just a few examples survive today. 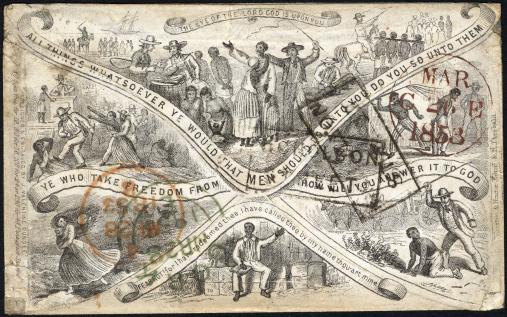 Less than a year after its publication in the United States, Uncle Tom’s Cabin sold more than one million copies in Great Britain. Although modern critics point out the book’s use of racially stereotyped characters, in its day it was regarded as a powerful piece of anti-slavery propaganda. Scenes from the novel decorate the reverse of this British anti-slavery cover published by James Valentine of Dundee, Scotland.

The scenes, clockwise from top flap: Uncle Tom is sold away from Aunt Chloe and his children because of his owner’s bankruptcy. The overseers Sambo and Quimbo flog Uncle Tom. Simon Legree whips Uncle Tom. Uncle Tom reads his Bible atop cotton bales on a Mississippi River steamboat. Pursued by slave catchers, Eliza escapes north with her five year old son Harry. Emmeline is sold away from her grieving mother, Susan. 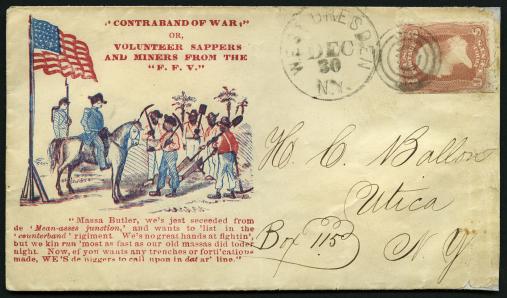 Early in the Civil War, Union General Benjamin Butler decreed that escaped slaves who reached his station at Fort Monroe would be considered “contraband” and not returned to their owners. Although the idea of black troops is caricatured by these envelopes, nearly 200,000 black men served in the Union forces. 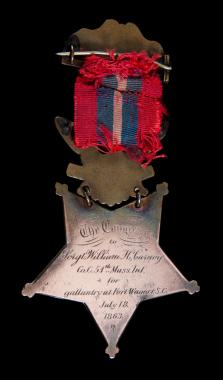 William Harvey Carney, born a slave in Virginia in 1840, volunteered for the celebrated, all-black 54th Massachusetts Volunteer Infantry Regiment. Shot twice while rescuing the American flag during an attack on Battery Wagner near Charleston, South Carolina, he later received the Medal of Honor. After the war, he worked as a letter carrier in the New Bedford, Massachusetts post office for more than thirty years.
Loan from Carl J. Cruz 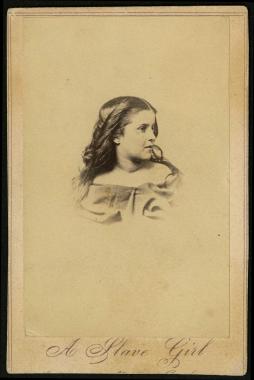 The National Freedmen’s Relief Association sold a series of slave photographs to raise money for educational projects in occupied New Orleans. They favored images of obviously mixed-race children, which appealed to a white audience. Photographs were taxed according to their retail value, and a government revenue stamp is found on the reverse. 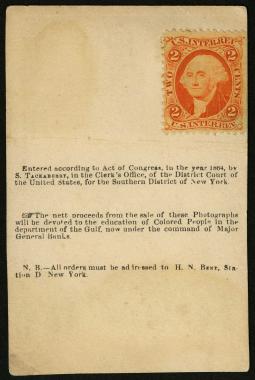 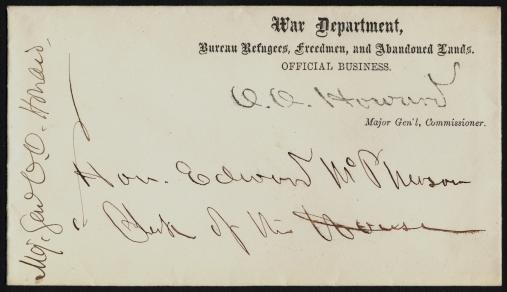 Private charity could only partially meet former slaves’ needs, which ranged from food and clothing to employment and education. Congress created the Freedmen’s Bureau in 1865 with Major General Oliver O. Howard as its commissioner. A Medal of Honor recipient, he later served as president of Howard University. His signature indicated that no postage was due. 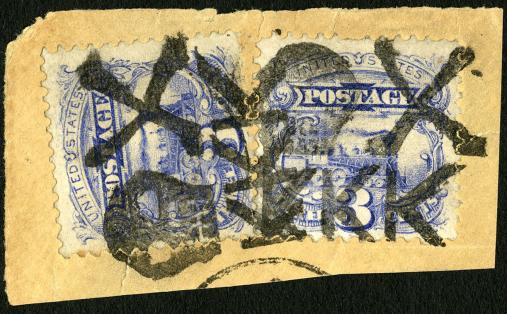 The skull and crossbones was one of the earliest symbols adopted by the Klan.
Loan from Stampvestors LLC through Columbian Stamp Company 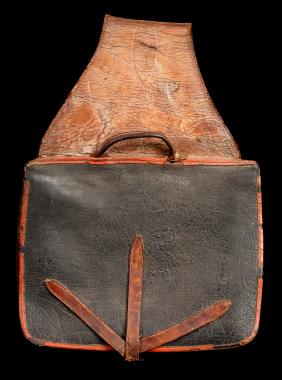 Palmyra, Virginia became a Rural Free Delivery post office on October 22, 1896, one of the first in the nation to deliver mail to farm families. This mailbag with separate compartments for “white” and “colored” mail was not required by federal policy but was procured by the carrier to satisfy either his own preferences or those of his customers. 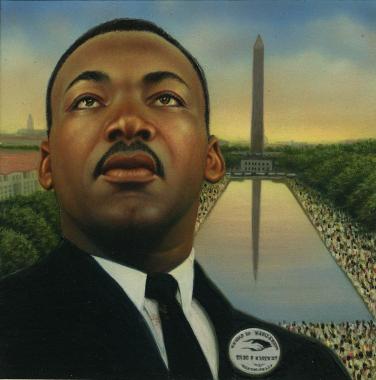 Martin Luther King’s I Have a Dream speech was commemorated in the Postal Service’s Celebrate the Century stamp series issued at the end of the twentieth century. A trace of brightness on the horizon represents hope, while King wears the March’s official badge.
Loan from the United States Postal Service, Postmaster General's Collection 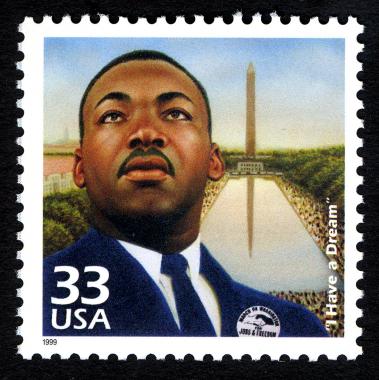 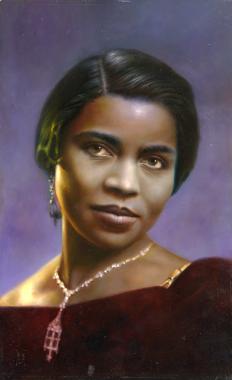 Canadian-born artist Albert Slark created this full-color oil portrait of Marian Anderson from a circa 1934 black-and-white photograph. Easily one of the most beautiful designs in the Black Heritage series, it won numerous awards and was exhibited at the Society of Illustrators 48th Annual Exhibition in New York City. 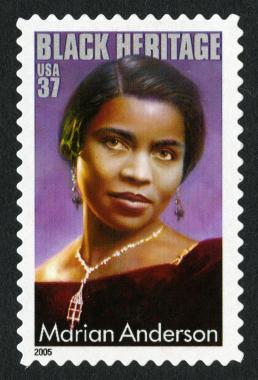 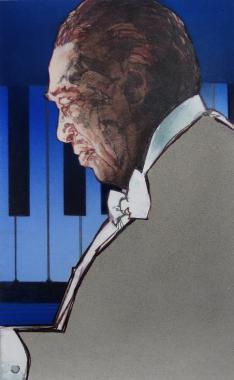 Performing Arts Series
The most prolific jazz composer ever, Edward ‘Duke’ Ellington and his orchestra toured the U.S. for nearly fifty years and also popularized the genre in Europe. 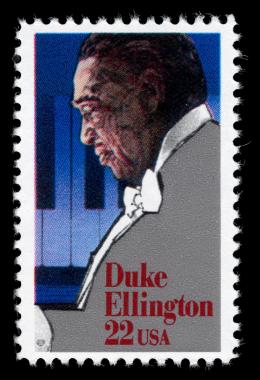