African American Troops in World War I: A Military Experience Based on Separate and Unequal Treatment

Despite concerns about racial discrimination in America, African Americans’ enthusiasm for supporting America’s entry in World War I was quite high in 1917. W.E.B Du Bois, one of the leading African American intellectuals of this period, rallied black support for the war effort in his memorable essay titled “Close Ranks.” Du Bois wrote: “Let us, while this war lasts, forget our social grievance and close ranks shoulder to shoulder with our fellow citizens and the allied nations that are fighting for democracy. We make no ordinary sacrifice, but we make it gladly and willingly with our eyes lifted to the hills.”

Nearly 368,000 African American men became soldiers in an army of 4 million. Unfortunately, because of institutional racism, the US Army was not prepared to provide equal treatment to African American soldiers. Since the Civil War era, the US Army had been segregated and had only a small number of black officers. Traditionally, black officers were allowed only to command black troops while white officers commanded both black and white units. The maintenance of racial segregation in the military was sanctioned by President Woodrow Wilson and the army’s senior and civilian command structure, including General John Pershing and the Secretary of War Newton Baker.

Adherence to this rigid policy meant that black troops, particularly draftees, were assigned to quartermaster and engineer units—occupational categories that performed the bulk of menial and unskilled labor for the army. 89% of all black troops drafted during World War I served in labor battalions, salvage companies, stevedore organizations, and infantry support units. Only 56% of white troops served in noncombatant units. Consequently, a disproportionate number of black troops in World War I were assigned to military camps throughout the United States, while military quotas and racism restricted the use of African American troops in the European Theatre, especially in combat units.

At several of these camps, such as Camp Sherman, Ohio; Camp Eustis, Virginia; Camp Humphreys, Virginia; and Camp Lee, Virginia, African American soldiers experienced mistreatment, racial discrimination and physical abuse by their white officers. African American troops were often degraded in rank, or prohibited from advancing. African American troops did not report these incidents through their military chain of command because they feared recriminations and reprisals from their commanding white officers, many of whom were part of the initial problem. 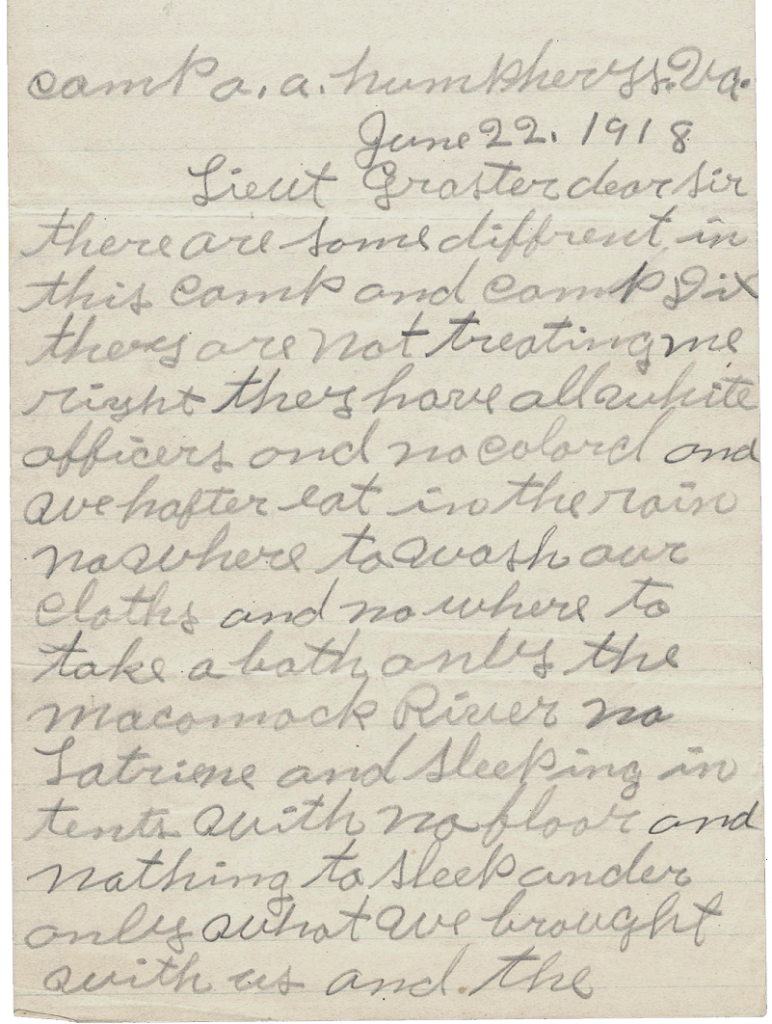 Private Silas Bradshaw wrote this letter to Lieutenant Graster, stationed at Fort Dix, New Jersey, describing mistreatment and physical abuse of black enlisted men by white officers and the absence of black officers at Camp Humphreys, Virginia. A transcription is available at: Private Silas Bradshaw to Lieutenant Graster, and please note that original spelling and punctuation usage are retained in the transcript in order to more fully present the writer’s style and wording. Courtesy Moorland-Spingarn Research Center, Howard University

Instead, black troops resolved to write letters to fellow African American officers, community and national black leaders, and black newspapers to share details of their difficult circumstances. Incidents of mistreatment are described in three letters - on loan from Howard University - which are featured in the My Fellow Soldiers: Letter from World War I exhibition at the Smithsonian’s National Postal Museum. The three letters were written in June 1918. Black enlisted soldiers at Camp Humphreys (present-day Fort Belvoir) articulated concerns regarding physical abuse by white officers, working and housing conditions, and the lack of basic sanitary conditions at the camp. The experiences described in these three letters were not unique to black soldiers at Camp Humphreys. Sadly, similar letters written by black troops stationed at several other military camps described being treated like “conscripted criminals” rather than soldiers.

A number of these letters were discussed in African American newspapers and periodicals, such as The Washington Bee, Cleveland Advocate, Topeka Plaindealer, and The Crisis magazine, which was published by the National Association for the Advancement of Colored People (NAACP). Editors for the publications were vocal in their indignation over the mistreatment of black soldiers. One investigation was done by WEB Dubois, editor of The Crisis; however, his investigations focused primarily on African American troops in Europe.

After the war’s end, some of the letters and reports of mistreatment were documented in books written by individuals such as Charles Williams, a Hampton Institute educator, who wrote a book titled Negro Soldiers in World War I: The Human Side, Sidelights on Negro Soldiers. Emmett Scott, who served as Special Assistant to the Secretary of War and was regarded as one of the highest ranking African Americans in the Wilson Administration, also wrote a book titled Scott’s Official History of the American Negro in the World War. However, their observations, particularly Scott’s, tended to portray a more conservative view of the experiences of black draftees in military camps than the firsthand experiences of the draftees themselves. 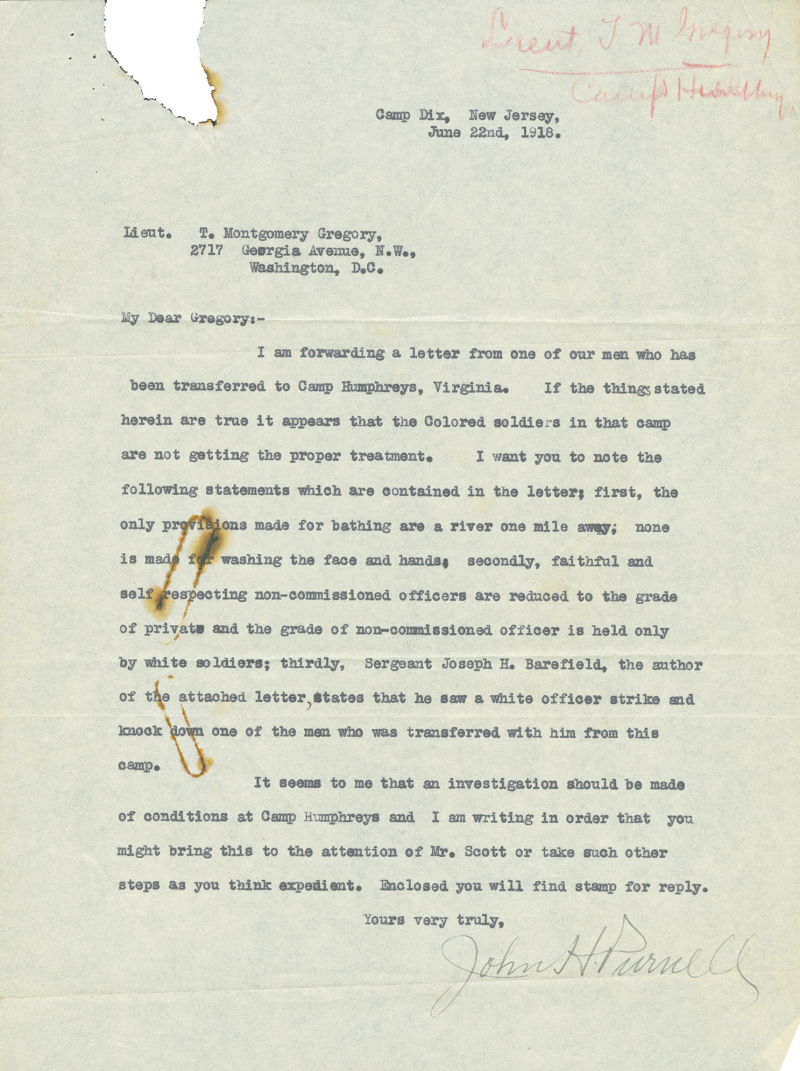 This letter was written by Lieutenant John Purnell to Lieutenant Montgomery Gregory while Gregory was stationed in Washington, D.C., at Howard University. Purnell expresses concern about the mistreatment and physical abuse of black soldiers at Camp Humphreys, as reported by Sergeant Joseph Barefield, who had transferred from Fort Dix. The letter mentions Mr. Scott, in reference to Emmett J. Scott and Lieutenant Gregory worked with Emmett Scott.  A transcription is available at: Lieutenant John H. Purnell to Lieutenant T. Montgomery Gregory, and please note that original spelling and punctuation usage are retained in the transcript in order to more fully present the writer’s style and wording. Courtesy Moorland-Spingarn Research Center, Howard University

The Wilson administration was fully aware of the mistreatment of black soldiers. However, due to its segregationist policies and the absence of black political influence at the national level, the War Department did not attend to the plight of black troops in a systemic or consistent manner, interceding only in extreme instances. Camp Humphreys was located just 15 miles from Washington, D.C.; yet, the government never formally addressed the physical abuse and mistreatment of black soldiers occurring there, despite Emmett Scott’s knowledge of the situation. Scott’s cautious approach in his aforementioned publication was no doubt due to his position within the Wilson administration. 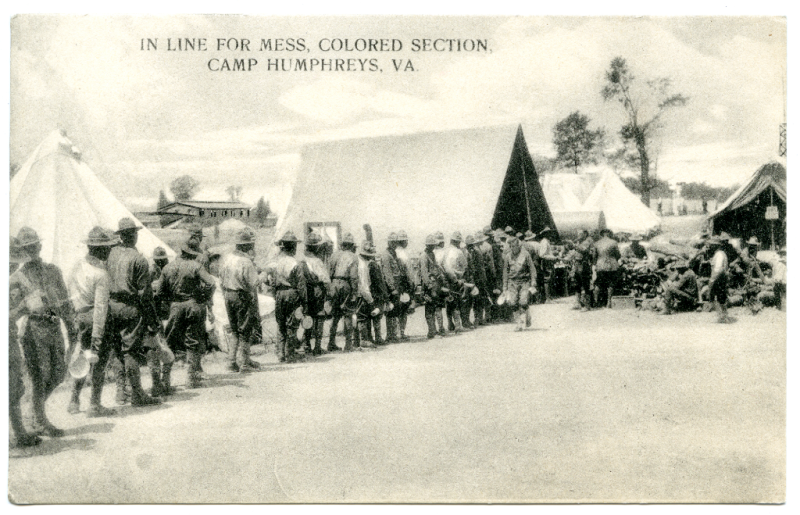 In many cases, conditions for black troops only improved when masses of white soldiers were discharged from the army after Armistice, thereby making room—literally—for black soldiers. Their departure allowed black troops to gain access to better living conditions which they had previously been denied. At Camp Humphreys, for example, following Armistice black troops were able to live in barracks instead of tents, dine in mess halls rather than in tents, and take hot, indoor showers instead of having to wash in the river nearly a mile away.

There is currently little evidence that the letter writing by African American troops did much to improve their conditions during the war. Nevertheless, the letters demonstrate the power of correspondence to create vital connections within a community. As historical documents, the letters are valuable for their first-hand accounts and details of the mistreatment and discrimination resulting from a military system defined by racial segregation. Segregated military facilities remained until President Harry Truman issued Executive Order 9981 on July 26, 1948, ending racial segregation in the US military. 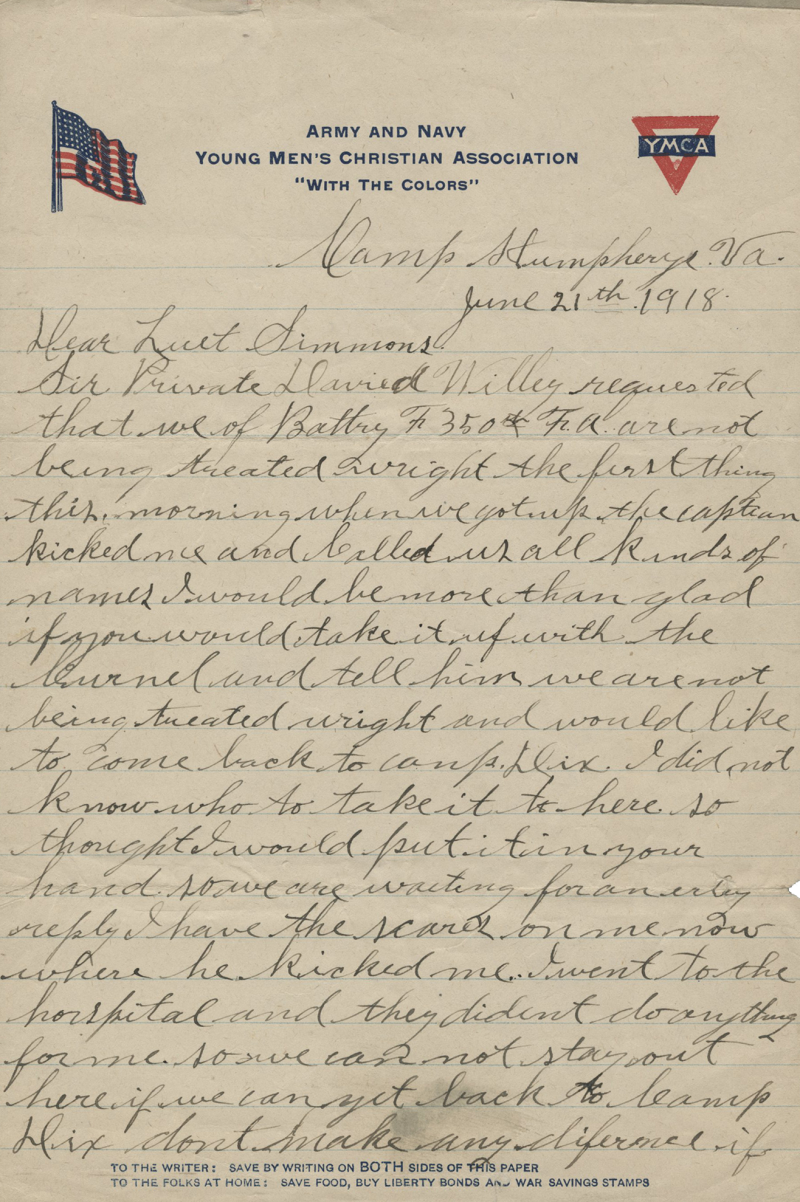 Private David Willey’s letter to Lieutenant Simmons, stationed at Fort Dix is another tragic eyewitness account of mistreatment of black troops at Camp Humphreys. A transcription is available at: Private David Willey to Lieutenant Simmons, and please note that original spelling and punctuation usage are retained in the transcript in order to more fully present the writer’s style and wording. Courtesy Moorland-Spingarn Research Center, Howard University

About the Author
Calvin Mitchell is an Assistant Curator of Philately. His interests are African American History and Philately, Military Postal History, movies and football. While working at the National Postal Museum, he likes the opportunity to access the museum's vast collection to perform historical research and write about interesting philatelic topics.