I always considered it a very safe airplane, because the carburetor would vibrate the airplane so badly that it would shake the ice off the wings.
Ernest M. Allison on the JN-4B "Jenny" airmail airplane

Ernest Allison was born on December 26, 1894, the son of William & Viola Allison, in Superior, Nebraska. Ernest M. Allison married Helen V. Kubat on September 3, 1923. He had graduated ground school at University of California, then transferred to flying school at Rockwell Field, California, where he got his wings and commission. Allison was assigned as a flight instructor at Kelly Field, San Antonio, Texas. From there he worked as a patrol pilot along the Mexican border. After being discharged from Mexican border patrol on October 27, 1919, he resigned his commission and became a flight instructor at a small flying school in Philadelphia. The work was interesting, but the pay was poor.

On August 23, 1920, he became a U.S. Air Mail Pilot. He was assigned to testing airplanes at the Hazelhurst Field at Long Island, New York, and also ferried airplanes to Cleveland as needed for airmail flights. On March 20, 1923, he was transferred to Omaha, Nebraska in the Western Division of the service. 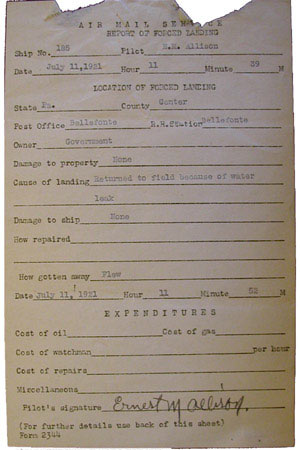