American Express joined the mailing industry in 1850, when we were founded as an express delivery company. For nearly 70 years, express shipping was our core business. We transported financial documents, parcels, freight, gold, currency, and myriad household items. The company supported the growth of the United States during the 19th and early 20th centuries, facilitating the development of communities and businesses across the country.

Our launch of our first financial products, the Money Order and Travelers Cheque, in the late-19th century paved the way for American Express to transform into a payments company. After the U.S. entered World War I, the federal government consolidated the express industry, creating a new entity called American Railway Express. In 1918, American Express exited the business upon which we were founded. By the early 20th century, we operated a global travel and financial services business, opening a network of travel offices in Europe, Latin America, and Asia.

American Express introduced its charge card in 1958, entering a new era of payment products. We also began an important relationship with the U.S. Postal Service, enabling us to communicate our products and services to customers. American Express’ payment businesses have expanded over the decades to include card products for the digital age, serving a diverse population of consumer, corporate, and small business customers.

Today, American Express is a global services company, providing customers with access to products, insights and experiences that enrich lives and build business success. For more details on our history, please see our timeline of key milestones.

Watchdog logo was used to symbolize trust and security

With the signing of the Articles of Association on March 18, 1850, Wells & Co.; Livingston, Fargo & Co.; and Butterfield, Wasson & Co. consolidated and formed the American Express Company. Our founders were Henry Wells, William G. Fargo and John Butterfield. The company's core business was the delivery of packages, valuables and other goods. By 1862, we had 890 offices, more than 1,500 employees, a network of express lines across nearly 10,000 miles of railway and express routes that reached from the East Coast to Minnesota and Missouri. 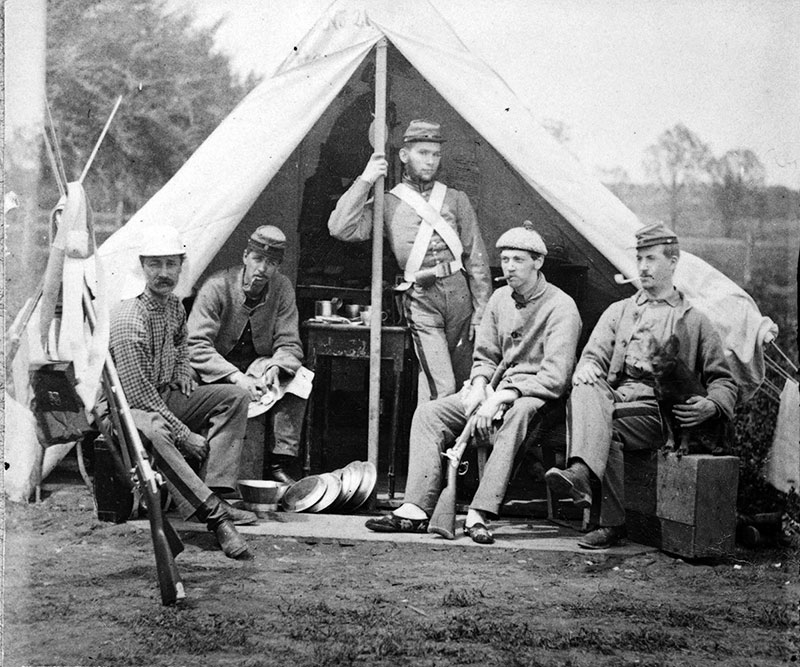 AmEx made its services available to the federal government
Courtesy of Library of Congress, Prints & Photographic Division, Washington, DC (www.loc.gov)

During the U.S. Civil War, American Express transported vital supplies to army depots and election ballots to troops in the field. Throughout the conflict, the company continued to provide delivery services. 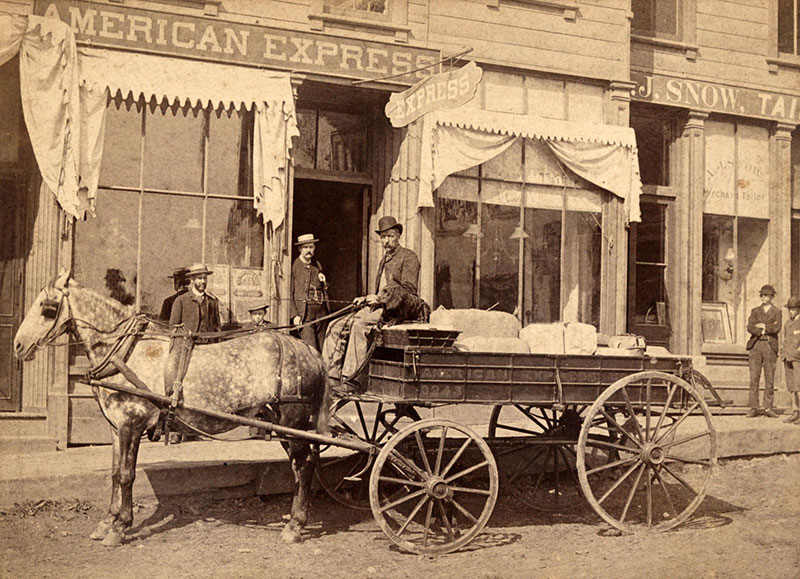 As an express delivery company, AmEx shipped myriad items, including gold, silver, financial documents, books, food and clothing. We were at the center of a developing national transportation and delivery network. Anticipating the needs of our customers, we offered an enhancement to existing express services with the creation of an Order and Commission Department, similar to a modern-day business-to-business (B2B) service. Our agents had access to a large selection of suppliers and purchased merchandise on behalf of customers at competitive prices.

1882
Introduction of the Money Order 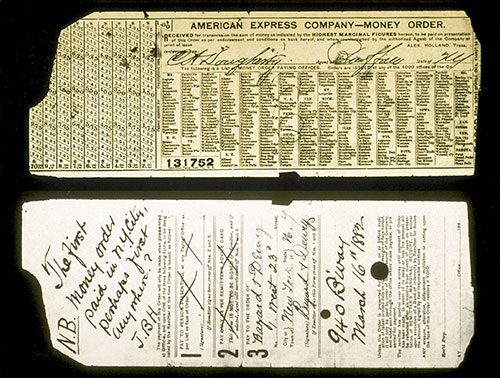 AmEx created a money order product that was secure and user-friendly, especially for the many immigrants sending funds back to their countries of origin. As few families had checking accounts, our money order became a popular method for paying the household gas bill and, later, the electric bill. The company’s product competed with the U.S. Postal Service’s money order, which was launched in 1863. 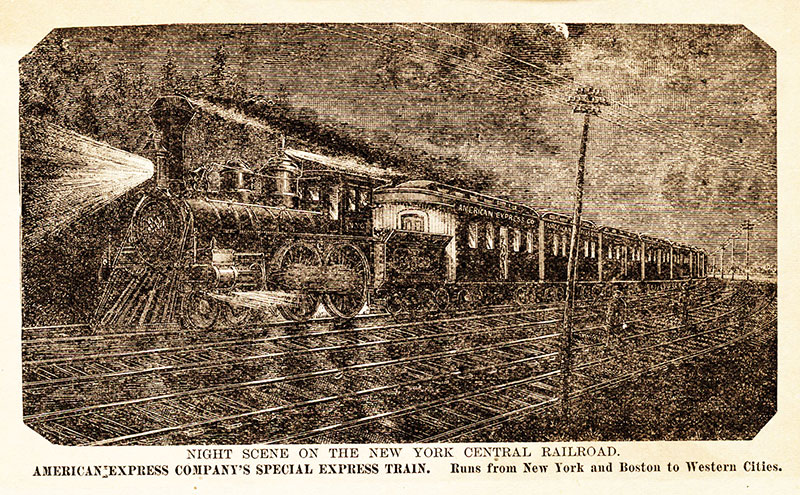 In 1883 American Express arranged with the New York Central Railroad to run special express trains from New York to Chicago, which took nearly four hours less to get there than any passenger trains along the same route. One local newspaper wrote: "This undertaking involves a large expense, but the American Express Company have no doubt they will be fully repaid by the public, who are not slow to appreciate such enterprise." In the previous decade, the U.S. Postal Service pioneered Fast Mail trains between New York to Chicago via Albany, Buffalo, Cleveland and Toledo. Their service, which ran from 1875 to 1876, demonstrated the viability of faster delivery times.

1891
Invention of the Travelers Cheque

The first cheque was cashed at the Hotel Hauffe in Leipzig, Germany

After the success of the money order, AmEx President James C. Fargo asked employee Marcellus Berry to develop a product that would easily convert U.S. dollars into foreign currency any place in the world. Berry designed a Travelers Cheque that was protected against loss, theft and fraud. The innovative design featured a counter-signature system and a watermark identifying the cheques as genuine. 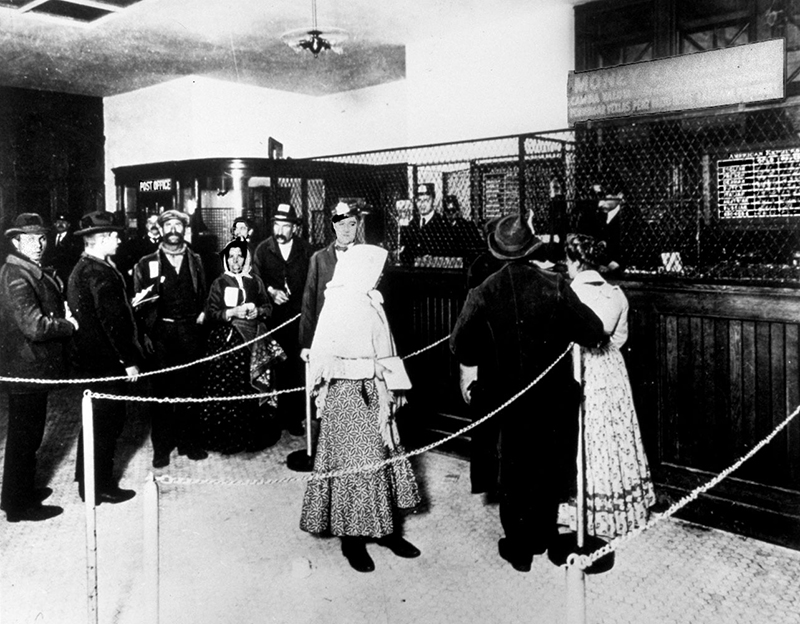 In the early 1900s, there was a peak wave of immigration through Ellis Island with approximately 1.25 million immigrants in 1907. New arrivals had to obtain U.S. currency in exchange for the currency and gold they brought with them from their homelands. In many cases, they carried their entire life savings with them. Upon the discovery of cheating by some less scrupulous money-changers, the U.S. government granted AmEx a contract to operate the official currency exchange office at Ellis Island. 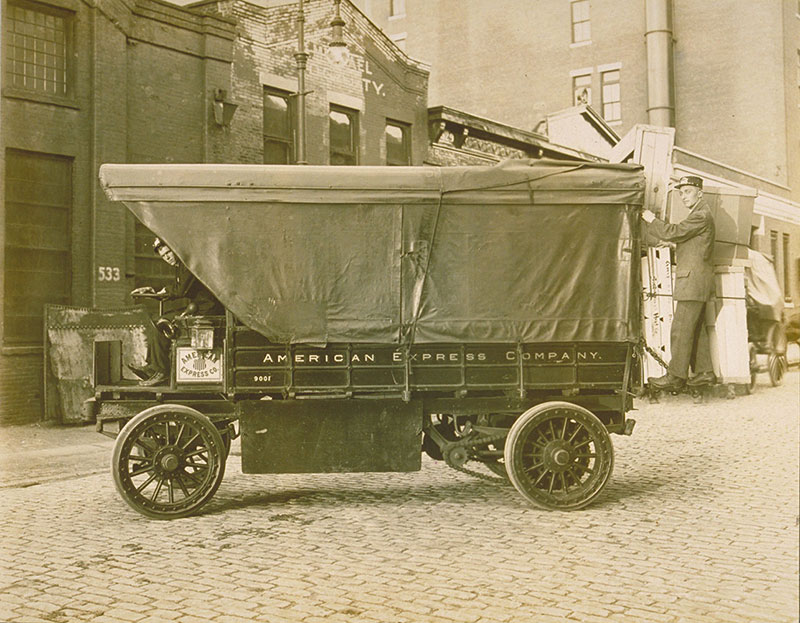 Motorized delivery vehicles were the latest in a series of technological advances adopted by the company. In 1871, American Express offices in New York City were connected telegraphically for the first time. In 1892, the first four electric lights were installed in our headquarters at 65 Broadway. A year later, the company purchased its first adding machine. In 1902, it bought a numbering machine for use on Travelers Cheques and, in 1912, AmEx purchased its first dictaphones. 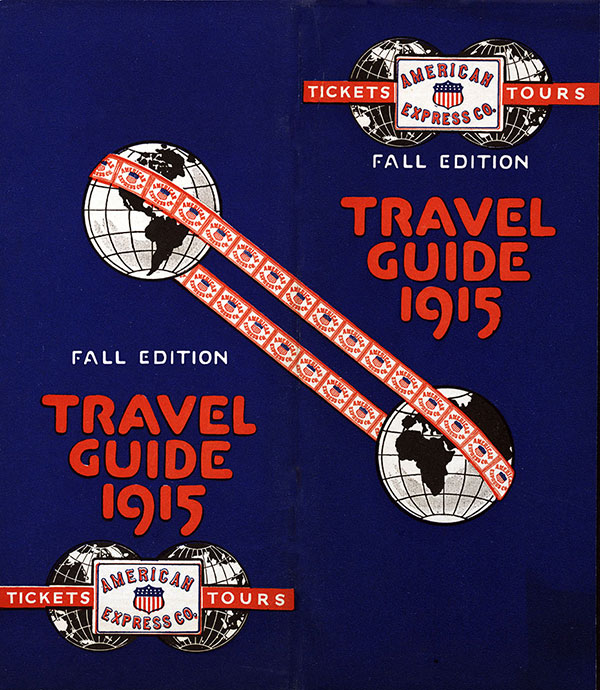 On October 10, 1915, The New York Times reported: "The American Express Company has launched forth into the tourist business and is now prepared to sell tickets by rail and steamship, to outline routes and arrange for personally conducted tours to any part of the world. It is just adding offices in Buenos Ayers [sic], Hong Kong and Manila to those which it has established all through Europe . . . and Canada and it regards this invasion of South America and the Far East as merely the beginning of a great development." 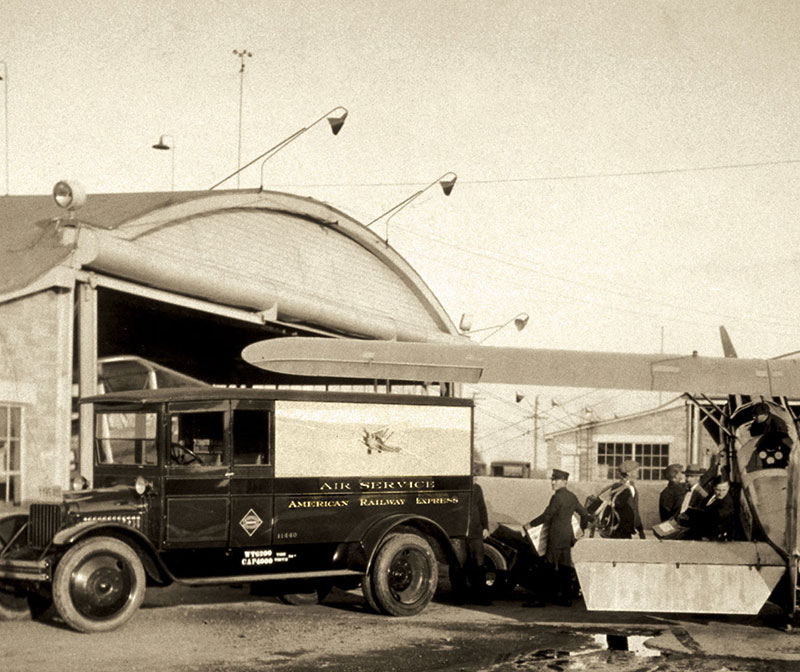 Following the U.S. entry into World War I, the government consolidated and managed the formerly private railroad and express companies. AmEx exited the express business while maintaining its travel and financial businesses. Activities developed as sidelines to the express business included money orders, foreign currency exchange, Travelers Cheques and travel services, all of which became the building blocks of AmEx's future. 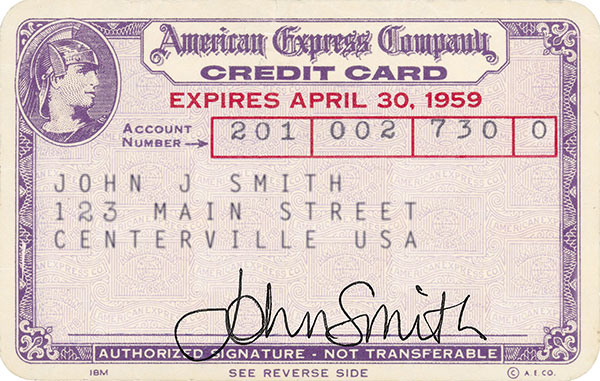 AmEx launched its first personal card in the U.S. and Canada

Made of paper, the original American Express Card was purple to match our Travelers Cheque. By October 1, 1958, the official launch date, we had issued 250,000 cards and had 17,500 establishments signed on to accept them. In May 1959, we became the first major issuer to introduce a plastic card. The embossed plastic card was much more durable and also enabled us to take advantage of a new technology: imprinters that mechanically transferred the Card Member's number, name and address from the card to the record of charge. 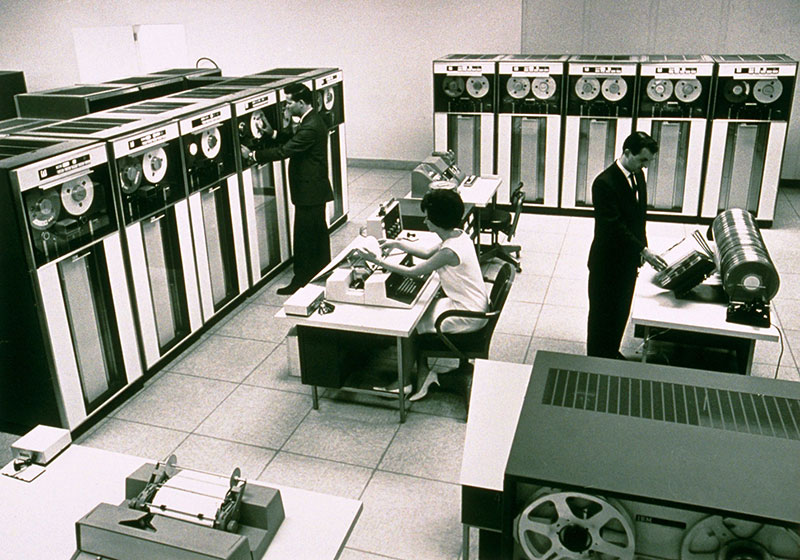 In March 1961, AmEx received its first computer, an IBM 7070-1401. The equipment enabled the company to switch from manual to automated systems for converting money orders and for its accounting and payroll applications. The mainframe was housed in a new American Express data processing center at 770 Broadway in New York City, which came to be known as the Eastern Regional Operations Center (EROC).

1969
Card Changed from Purple to Green 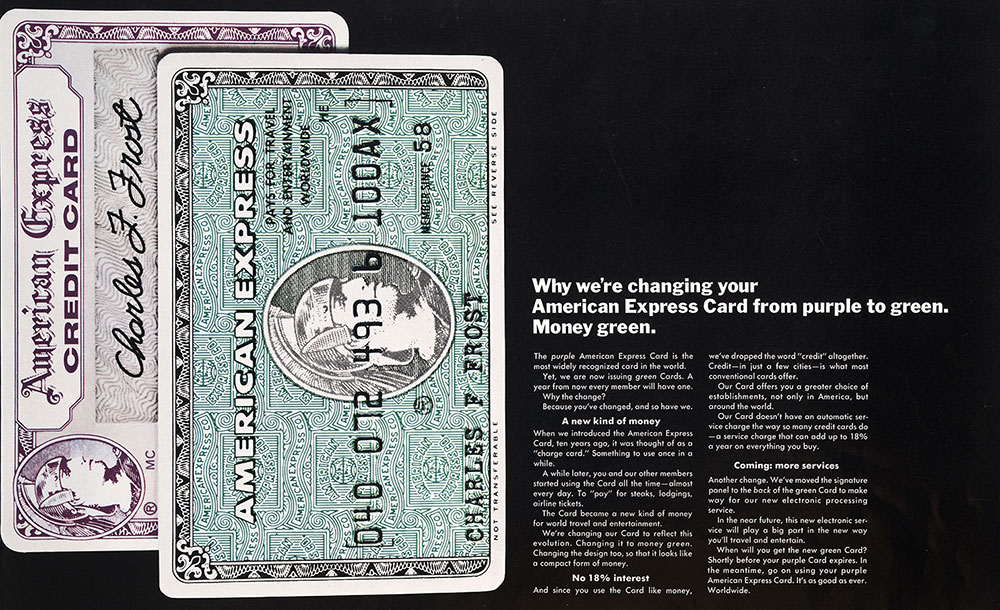 "Money green"–based on the color of the U.S. dollar

The American Express Card was purple until this date. According to a 1969 print ad: "When we introduced the American Express Card, ten years ago, it was thought of as a 'charge card.' Something to use once in a while. A while later, you and our other members started using the Card all the time almost every day. To 'pay' for steaks, lodgings, airline tickets. The Card became a new kind of money for world travel and entertainment. We're changing our Card to reflect this evolution. Changing it to money green." 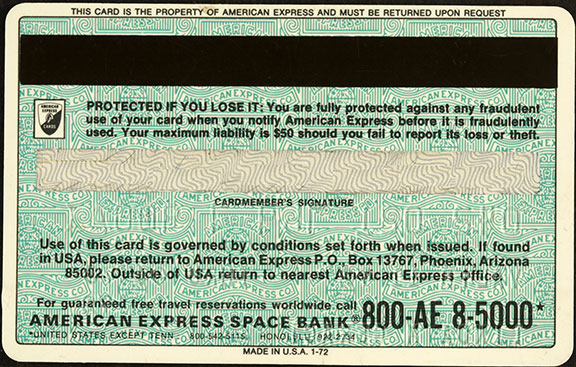 Data embedded within tiny magnetic bars on the back of each card increased the processing speed of charge card transactions at the point of sale, reducing the chance of fraud. An Express Terminal, smaller than a typewriter, read a Card Member's account number by scanning the stripe of magnetic tape and recording the amount of the sale. It then transmitted the information over telephone lines to American Express Authorization Centers and received a response within five seconds. 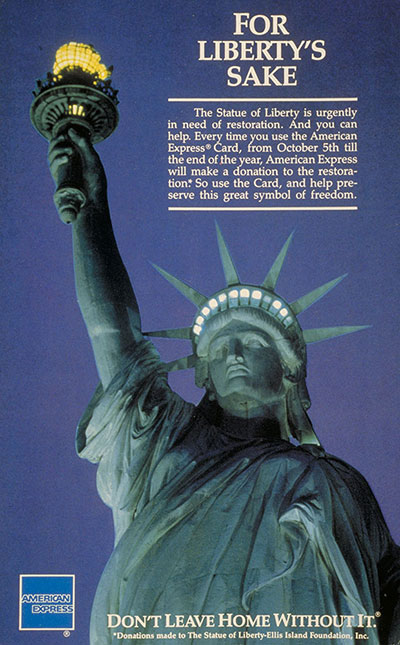 AmEx launched an innovative cause-related marketing program to assist in the restoration of the Statue of Liberty (whose centennial was approaching in 1986) and Ellis Island. The program tied charitable donations to the use of American Express Cards, Travelers Cheques and Travel Services. The campaign included such messages as: "In addition to all the logical reasons for using the American Express Card, there is now one that is unabashedly sentimental." 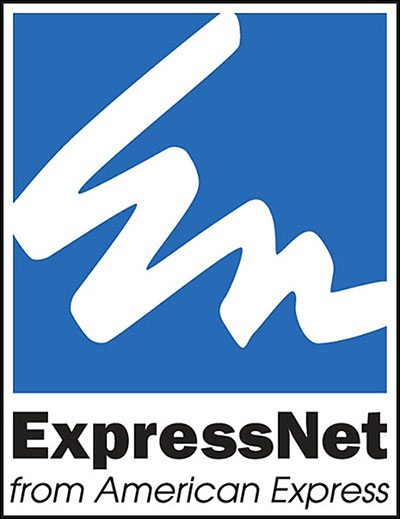 ExpressNet, the predecessor of AmericanExpress.com, opened up a new communications channel between American Express and Card Members. This interactive financial and travel services site on AOL enabled Card Members to check the status of their AmEx accounts online, pay their AmEx bills electronically, enroll in rewards programs and take advantage of special offers from airlines, hotels, stores and restaurants.

‹ Financial Services Industry up AT&T ›
Back to Top