Scientific American Helps with the Exchange of Information and Entertainment

In The Beginning
Scientific American, the longest continuously published magazine in the U.S., has been bringing its readers unique insights about developments in science and technology for more than 170 years.

In 1845, two years before the first U.S.-issued postage stamp, Rufus Porter founded the publication as a weekly broadsheet subtitled "The Advocate of Industry and Enterprise, and Journal of Mechanical and Other Improvements." A restless inventor, Porter soon turned to other ventures, and after 10 months sold Scientific American—for the sum of $800—to Orson Desaix Munn and Alfred Ely Beach.

Writing their magazine in longhand at their headquarters in New York City, and sending out galleys around the corner for a technician to typeset the magazine for printing with a manual or steam press, the magazine reached a circulation of nearly 4,000 by 1846. Scientific American’s headquarters remain in New York today, supporting a worldwide print circulation of over 500,000. Editors now compose the entire magazine digitally and send it to Minnesota for “web-offset” printing. Automatic machines take images on plates and eventually transfer them to a continuous wheel of paper.

In an era of rapid innovation, Scientific American founded the first branch of the U.S. Patent Agency, in 1850, to provide technical help and legal advice to inventors, largely via mail; the magazine also continued to list patents in its Index of Inventions section. A Washington, D.C., branch of the Agency was added in 1859. In 1995, the U.S. Postal service issued stamps commemorating historical inventors who were active from 1830 to 1935 (such as Eadweard Muybridge, Ottmar Mergenthaler, Frederic E. Ives). Scientific American not only listed their inventions accordingly, but even had several articles written by and about these inventors. By 1900, more than 100,000 inventions had been patented thanks to Scientific American. Today, the U.S. Patent Office processes patents electronically to the tune of nearly 500,000 approved patents a year.

For a century, Munn & Company retained ownership of the magazine, which chronicled the major discoveries and inventions of the Industrial Revolution, including the Bessemer steel converter, the telephone and the incandescent light bulb. Edison presented the prototype of the phonograph for inspection by the editors, and Samuel Morse, father of the telegraph, and Elias Howe, inventor of the sewing machine, were frequent visitors to the offices in downtown New York City.

Milestones
At the turn of the century, vehicles were of particular interest, and in 1899, a special issue was devoted exclusively to bicycles and automobiles. The editors took great delight in reporting new speed records, including a land-speed record of a mile in 39.4 seconds set in 1904 by Henry Ford while driving across the ice of Lake St. Clair, Michigan.

By this time, the magazine had established its hallmark for pinpointing emerging trends before news of them reached the general population. Articles on Marconi's experiments appeared two decades before the advent of radio. Scientific American published photographs of the Wright Brothers' glider nearly two years before the successful Kitty Hawk airplane flight. Robert Goddard contributed an article in 1921 defending and explaining his work on developing a rocket capable of reaching "interplanetary distances." In 1927 Scientific American reported on a practical demonstration of television that sent the voice and moving image of Secretary of Commerce Herbert Hoover over telephone wires from Washington, D.C., to New York.

In 1948 Gerard Piel, Dennis Flanagan and Donald Miller purchased Scientific American from Munn & Company and founded Scientific American, Inc. In their quest to increase the immediacy, timeliness and authority of the magazine, they insisted that the majority of the articles be written by the people who actually did the work described—a unique distinction among consumer magazines that still applies.

With ahead-of-the-curve reporting, Scientific American continued to cover groundbreaking events in science and technology. An article prophetically entitled "Computers in Business" was published in 1954. From the successful launch of Telstar to a single-topic issue that identified "Key Technologies for the 21st Century," the magazine has alerted its audience to the expanding possibilities of communications. Medical coverage included Jonas Salk writing on the development of his polio vaccine, Robert Jarvik detailing the creation of the Jarvik-7 artificial heart, and single-topic issues on AIDS and the immune system. New technologies that revolutionized the automobile industry were explored.

Renowned Writers
More than 150 Nobel laureates have written for Scientific American, most of whom wrote about their prize-winning works years before being recognized by the Nobel Committee. In addition to the likes of Albert Einstein, Francis Crick, Jonas Salk and Linus Pauling, Scientific American continues to attract esteemed authors from many fields:

In 1986 Verlagsgruppe Georg von Holtzbrinck, a German-based publishing group, bought Scientific American, Inc. In June 2009, Scientific American joined Nature Publishing Group (NPG). Springer Nature was formed in 2015 through the merger of Nature Publishing Group, Palgrave Macmillan, Macmillan Education and Springer Science+Business Media. Springer Nature is one of the world's leading global research, educational and professional publishers; the world's largest academic book publisher; publisher of the world's most influential journals; and a pioneer in the field of open research. The company numbers almost 13,000 staff in over 50 countries.

SA Today
Scientific American is the award-winning authoritative source for the science discoveries and technology innovations that matter.

In 2009, Mariette DiChristina became the eighth Editor-in-Chief in Scientific American's history and the first woman to hold the position. Under DiChristina’s leadership, the magazine has received numerous accolades including a 2011 National Magazine Award for General Excellence. It was the sixth “Ellie” award given to Scientific American by the American Society of Magazine Editors.

Scientific American Hosts and Participates in Panels Across the World

Editors of Scientific American, like Editor in Chief Mariette DiChristina, speak all over the world at events geared towards innovation, information, and education. The magazine also organizes conferences itself. 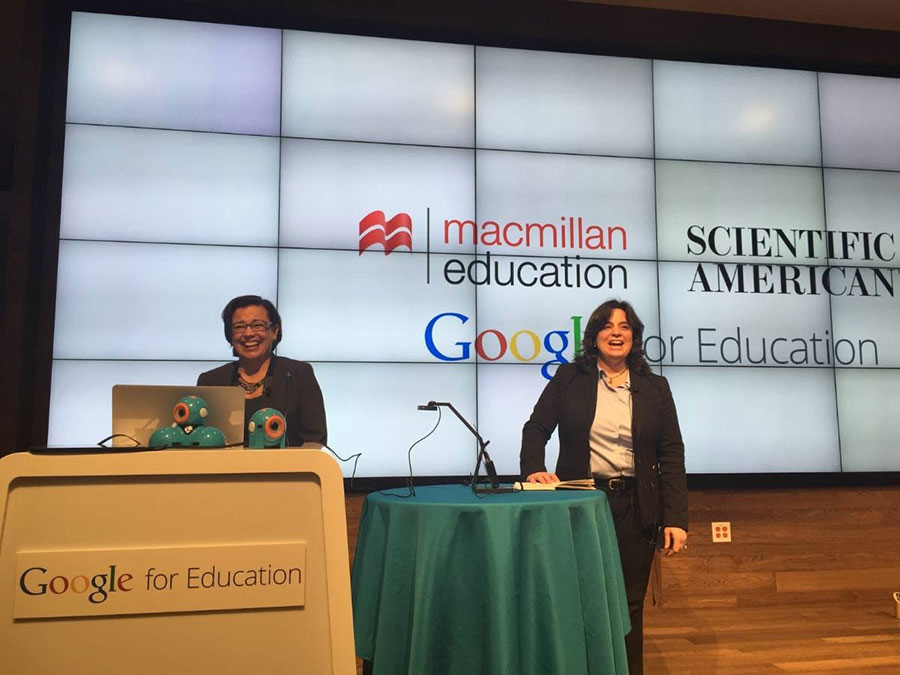 Scientific American at the South by Southwest® SXSWedu Event
SXSWedu is a conference and festival hosting leaders in education. 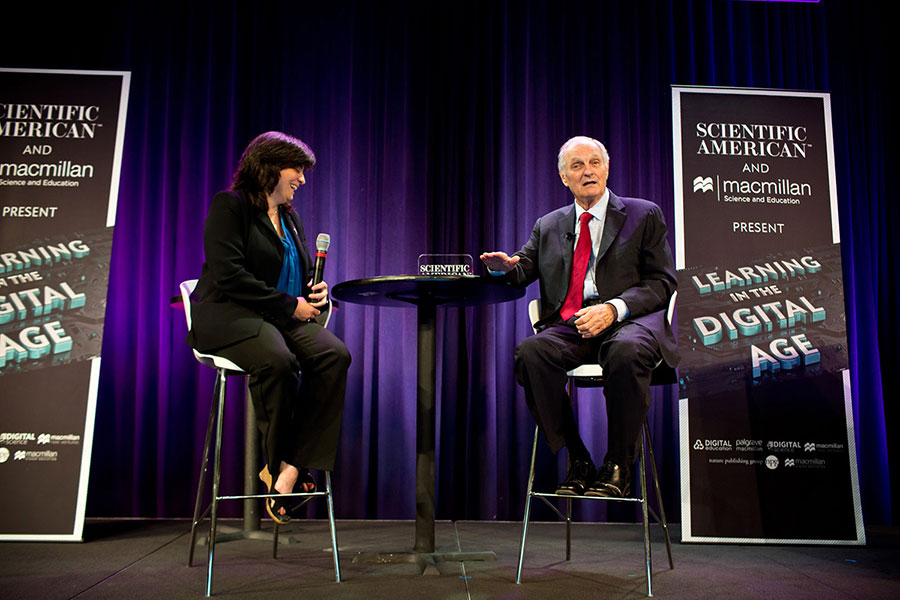 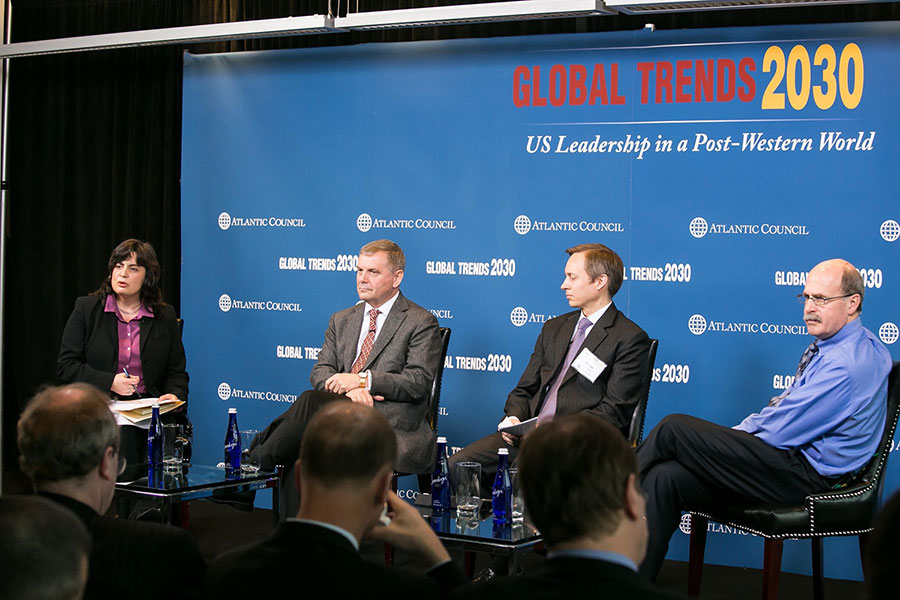 Atlantic Council, Panel at Global Trends 2030
The 2012 conference convened participants from policymaking, business, media, and technology to discuss global futures, the potential for change, and science’s role in making this happen. 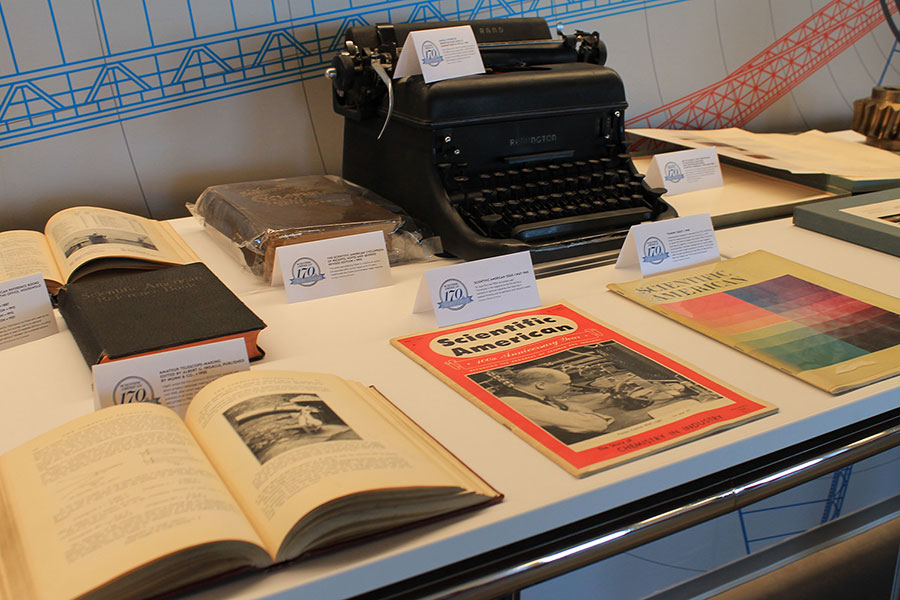 Scientific American Issue – May 1945
An issue from the “100th anniversary year” (magazine with red cover). The articles in the magazine during this era focus on technical industries then booming in postwar American. A newer issue accompanies it (right). Scientific American also published reference books (left) from the late 1800s to early 1900s as manuals for businesses or personal use.
Courtesy of Mariette DiChristina

Manual Typewriter, Remington Rand Model 17, Manufactured in the U.S. – 1946
Said to belong to either Gerard Piel (publisher, then chairman 1947-1986) or Dennis Flanagan (editor in chief, 1947-1984) of Scientific American. Before the advent of the desktop computer in the mid-1980s, all the articles in the magazine were composed on machines such as this one.
Collection of Scientific American 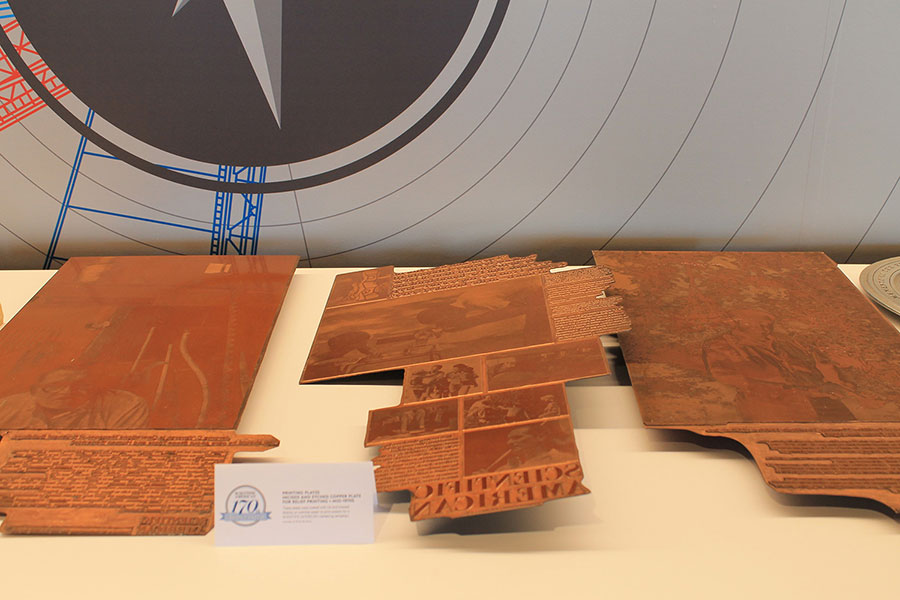 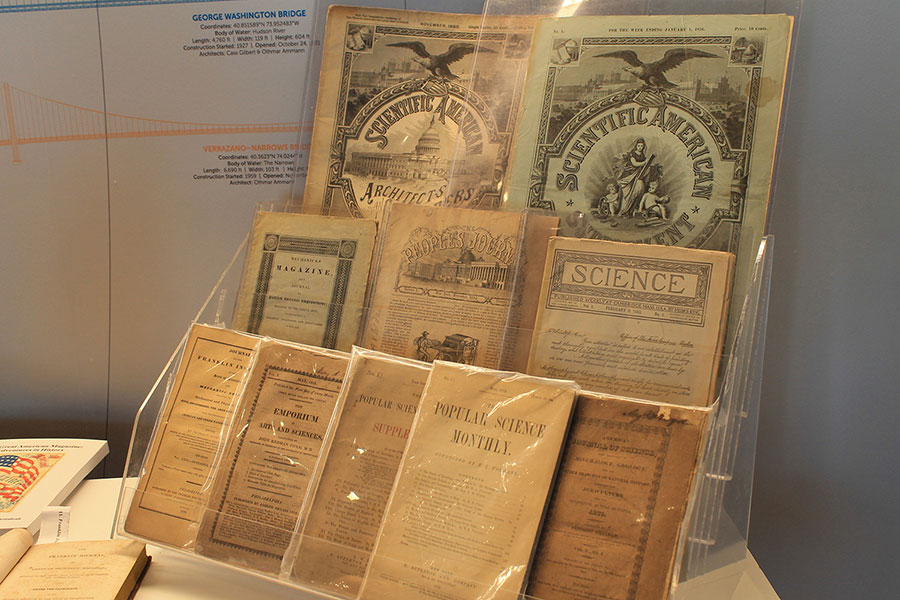 Original Issues From the 1800s (rear)
The first issue of Scientific American was a weekly issue in 1845. In 1921, Scientific American officially became a monthly issued publication, like Popular Science, founded in 1872.
Collection of Steven Lomazow 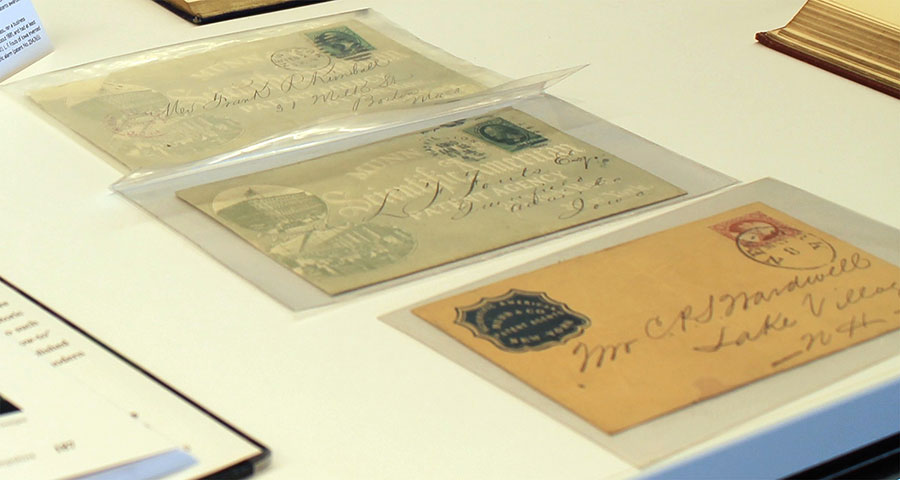 Letters that Scientific American Sent as a Patent Agency – 1850s-1880
These envelopes were mailed to inventors who had patents issued to them by Munn & Company, the owners of Scientific American at the time. In 1846, owners Orson Desaix Munn and Alfred Ely Beach set up a patent agency in their New York office to handle the large number of requests for assistance from inventors, and later another one in Washington, D.C.
Collection of Scientific American 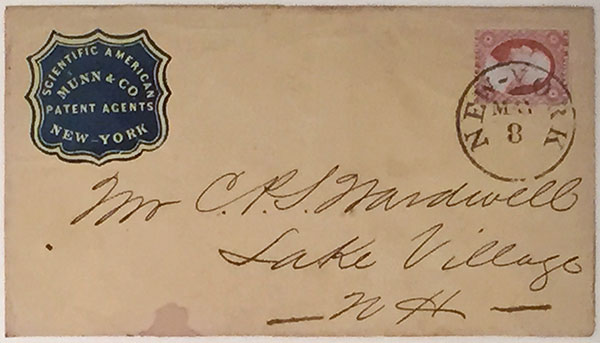 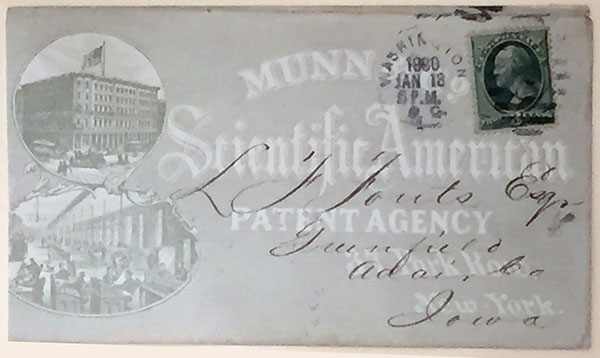 Envelope to L. F. Fouts of Iowa from the Washington offices of Munn & Co., 1880
Fouts invented several electrical devices, including an electric alarm (patent No. 234,765).
Collection of Scientific American 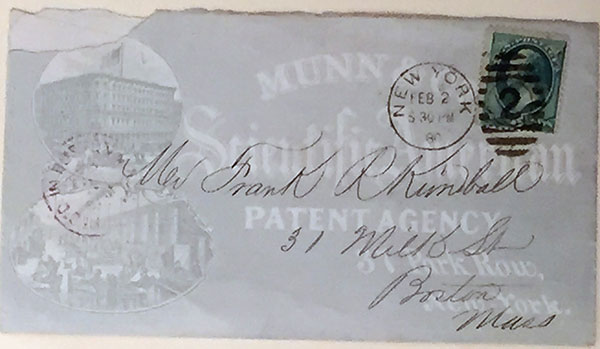 Envelope to Frank R. Kimball of Boston, Mass., from the New York offices of Munn & Co., 1880
Kimball ran a business manufacturing lighting devices up to about 1881, and had at least one electric lamp patent (No. 224,441).
Collection of Scientific American 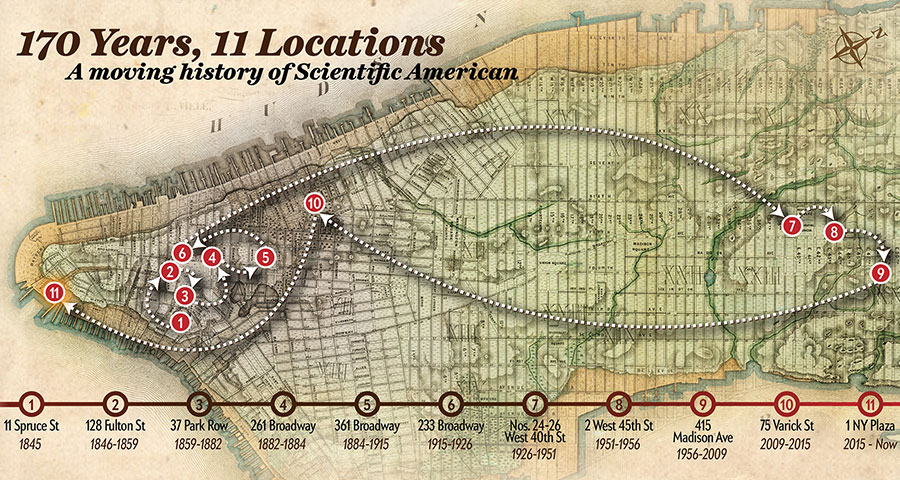 170 Years of Scientific American Locations
Today the magazine is produced less than a mile away from where it was born, at 11 Spruce Street. Founder Rufus Porter described it as “a little ‘7 by 9’ office.” See what the 1800s offices looked like and more at Scientific American, on the Move.
By Daisy Chung. (Base map courtesy of the David Rumsey Map Collection.) 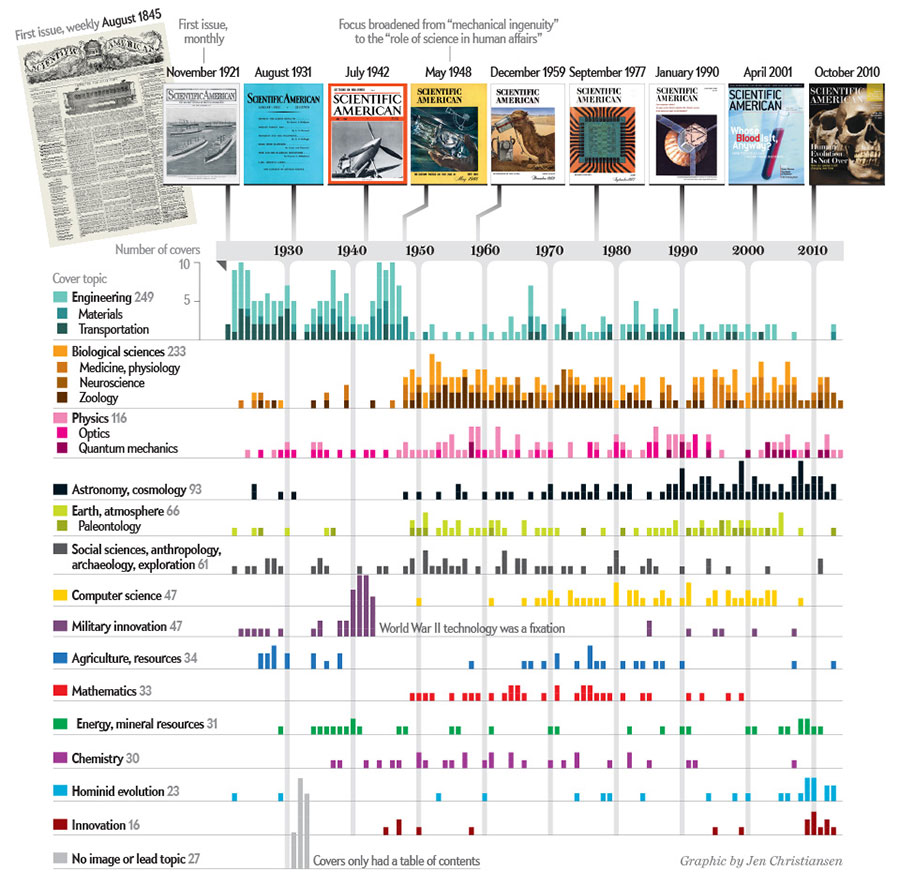 Scientific American Covers Shift Topics From 1921 to Present
Until after World War II, engineering and other applied sciences predominated on the cover pages. Afterwards, attention turned towards the natural world (biology) and to theoretical pursuits (physics, astronomy). Today neuroscience and evolution are surging.

‹ Quad/Graphics up Time Inc. ›
Back to Top