1921
Warren Sheppard and sons, William and James, leave the employ of the Sherman Envelope Co., which had its beginnings in Worcester in 1899, to start the new Sheppard Envelope Co. Mr. Sheppard, mechanically gifted, designs and builds modifications to the plunger-style folding machines that have become industry favorites since the late 1800s. The fledgling company specializes in making envelopes for the fine stationery trade, the greeting card industry, and commercial uses. Sheppard achieves distribution across the United States.

The early half of the 20th century becomes a heyday for envelope manufacturers as costs of delivering mail, making paper, and making envelopes fall rapidly, making correspondence via the USPS affordable to all.

1927
Sheppard introduces mint flavored seal gum as a way to increase the user friendliness of its greeting card and stationery envelopes, since almost all envelopes are sealed by licking them. 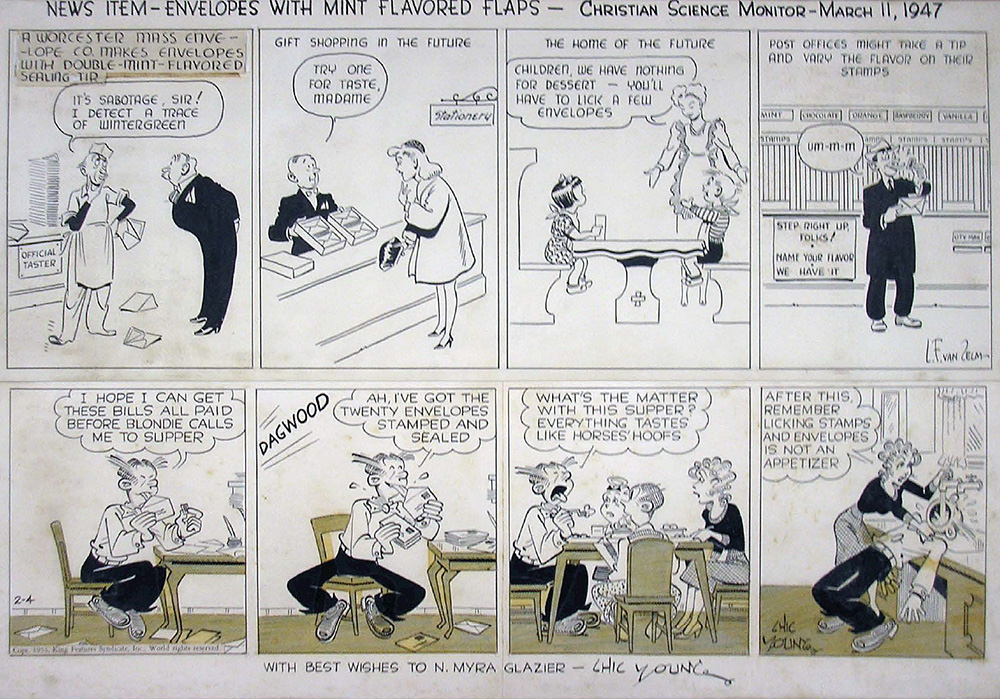 1943
Upon the death of Warren Sheppard, Myra Glazier, former assistant treasurer of Sheppard Envelope, becomes President and Treasurer. She also becomes active in the Worcester County Republican party. She is passionately dedicated to women’s issues as evidenced by her TOE HOLD ON THE LADDER speech delivered to 3,000 General Federation of Women’s Club Convention delegates, June 26, 1947 at the Commodore Hotel, New York [transcript (PDF)].

Ms. Glazier re-brands the Sheppard logo to include a ewe instead of a ram, and becomes an eager adopter of sales promotion products.

A gifted opportunist, she picks her political friends carefully, and is eventually successful in having the Winona Street name changed to Envelope Terrace.

1954
Ms. Glazier unveils her “Chinese Room” which is to serve as Sheppard’s Board of Directors room, decorated in a Chinese motif and adorned with Chinese artifacts. The Chinese ambassador to the U.S. cuts the ribbon, and hundreds of visitors sign the guest book. At the same time, the “Mexican Room” adorned in a Mexican motif, complete with piano, opens on the third floor to serve as the employee lounge. “Davy Jones Locker (decorated with crab traps, lobster traps, fish nets and a ping pond table)” is created in the basement as an alternative lounge. The entrance to the Locker is gained via a ship’s “deck and companionway” which leads from the floor above to the ocean-bottom fantasyland below. 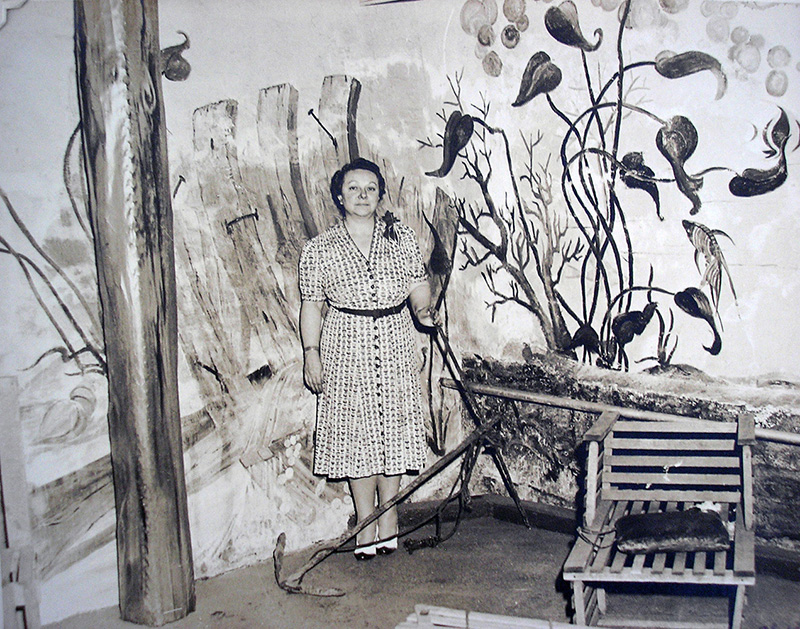 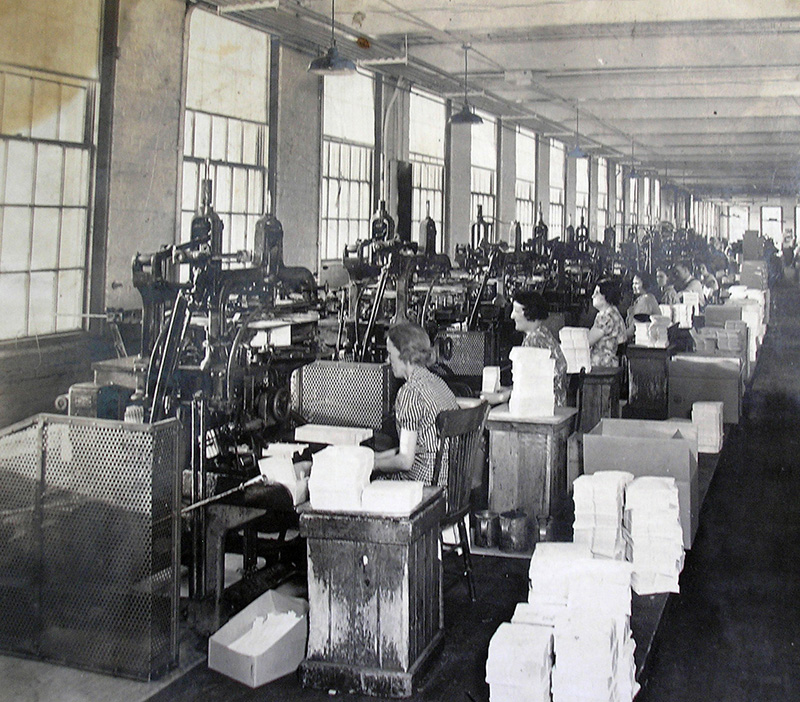 1955-1967
Sheppard continues its attempt to compete in the low price commodity / greeting card envelope market with its now obsolete plunger machines augmented by newer, but still slow, FL Smithe Wide Ranges (WR). Unfortunately this market requires high-speed machines, of which Sheppard has none. This point is compounded by the fact that its multi-story building with wooden floors cannot accommodate such equipment.

The rumor on the street is that Sheppard is not paying its bills in a timely manner, and is close to going under. Notes to creditors say “Put your faith in a woman, and never in a man”, and are very effective at allowing Sheppard to extend its accounts payable. 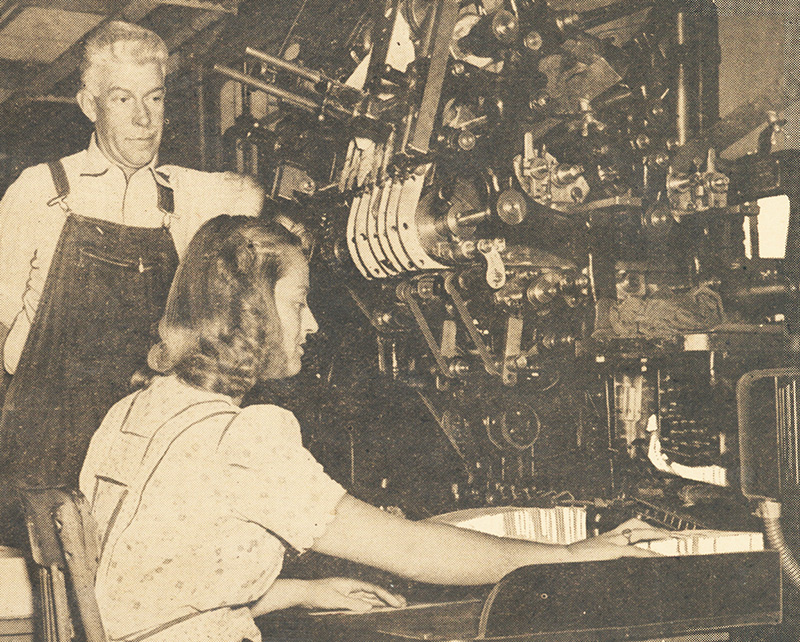 During this period, Linc Spaulding (future President of Sheppard Envelope and a Worcester native) graduates from Dartmouth and joins the Marines. Mr. Spaulding becomes a carrier qualified Naval Aviator and after receiving his wings is assigned back to Kingsville, Texas to become an Advanced Jet Flight Instructor. After 4 years active duty, he returns to Worcester to work in his father’s advertising agency as a copywriter/account executive.

Possessed with a desire to make and sell the things he has made rather than simply advertise products made by others, Spaulding hears that New England Envelope, located in Worcester, is looking for an Assistant Sales Manager. He walks in off the street and talks with Jack Lund, the owner, who has an excellent reputation in the community as a smart, honest, community-oriented businessman. Spaulding leaves advertising to join New England Envelope in 1963. 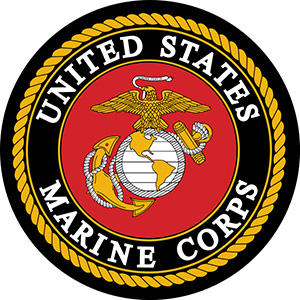 1967
In June, Mr. Spaulding learns that Sheppard Envelope Company, located not more than a mile away from New England Envelope, is for sale. He approaches Jack Lund about buying it, and to allow him (Mr. Spaulding) to run it. But Jack replies “you couldn’t pay me to take it”. So, Mr. Spaulding, along with former Sheppard employee Hank Sawin, and a group of Worcester investors, purchase Sheppard Envelope from Ms. Myra Glazier. The mission of Sheppard is changed from volume to custom sizes, rapid turn-around, and excellent quality, a mandate that Sheppard’s machinery, management and market can support.

In July, Mr. Spaulding resigns from the Marine Corps, and stops flying the Douglas A-4 Skyhawk (the Bandit airplane in the movie “Top Gun”) as a Weekend Warrior out of S Weymouth Naval Air Station (located just south of Boston). 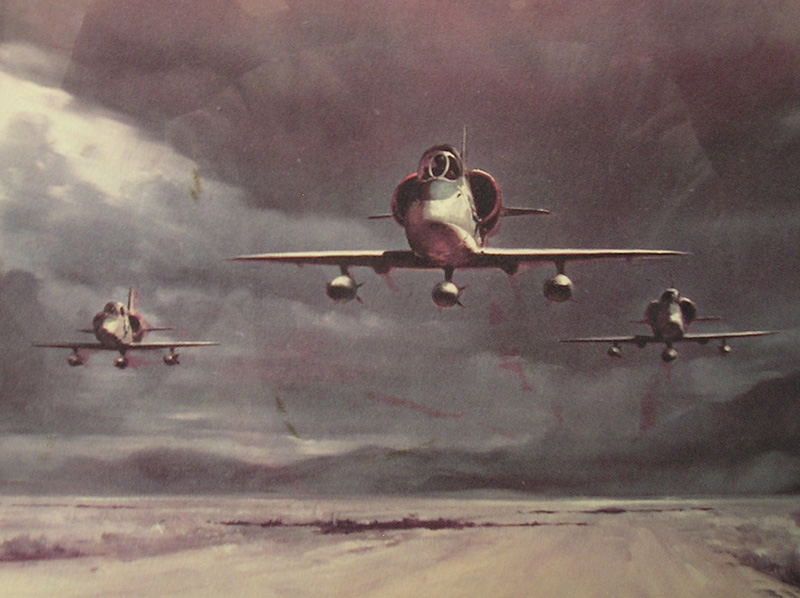 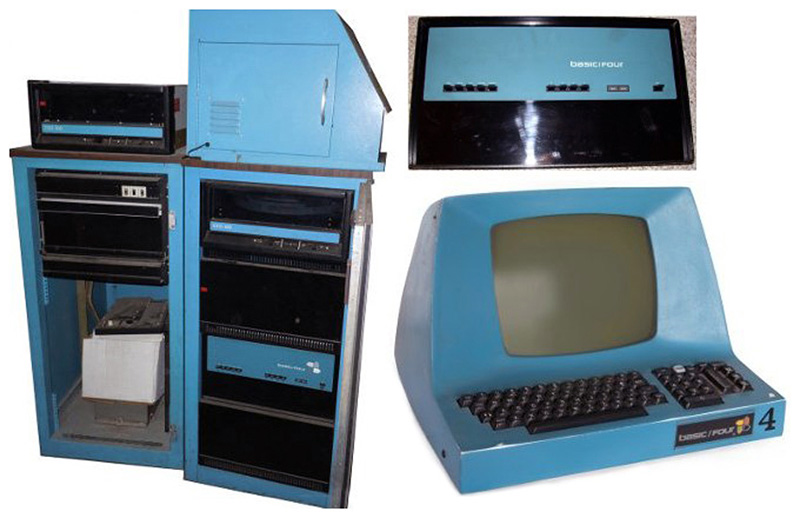 1971
The investors receive back all of their initial investment. Marketing and production emphasis remains with the theme of custom sizes, rapid turn-around, and high quality.

1972
Sheppard becomes one of the first envelope manufacturers to install a computer driven (Basic Four) estimating, order entry and billing system. It also continues to modernize its machinery to manufacture products for new envelope markets.

1974
Sheppard buys the Dobie Envelope Company, also located in Worcester. Dobie has three web-fed folding machines of its own design specializing in church offering envelopes. The Dobie machines were conceived in the ‘30s, and use a totally different approach to envelope manufacturing. The frames are cast (iron), but the parts are available off the shelf, including the diametrically rather than circumferentially pitched gears. All motion is rotary. A ’37 Dodge differential controls the speed of the web. The envelope blank is formed with fly knives, so die cutting is eliminated. The web has very narrow side seams which reduces paper waste to almost nothing. Printing is in line. The Dobie machines are the essence of simplicity, and the church offering envelopes are an ideal fit.

1981
Mr. Spaulding becomes Board Chairman of the Envelope Manufacturers Association (EMA), about the same time as the EMA moves its offices from New York to Alexandria, Virginia, just south of Washington, DC.

1983-1987
With their simplicity and ultra low maintenance costs, the Dobie machines become the inspiration to design and build a modern variant. Perhaps such a machine would have value in emerging third world nations as their rising literacy rates would usher in the need for vast amounts of new correspondence. This grandiose idea does not prove feasible, but the basic Dobie concepts (web with fixed pull length, in-line die cutting and printing) has the potential to make an entirely new envelope: A 2-way all-in-one envelope that combines the outgoing envelope, the reply envelope and a message. The new envelope will weigh about 1/3 less than the 3 individual pieces it replaces. There are two such envelopes on the market now, one made by Tension Envelope, the other by 21st Century. They are very close in design. There is room for another, if it is different, and can be patented. 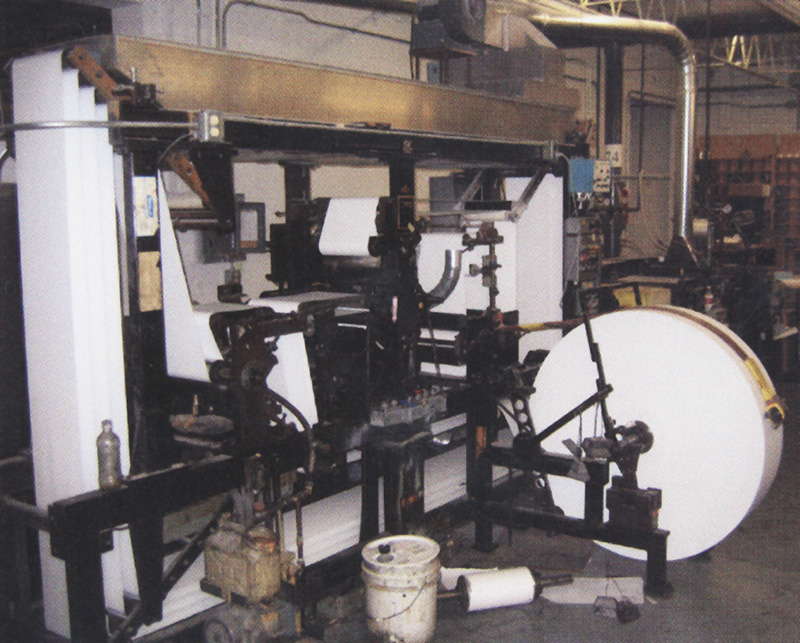 1987
The totally new, designed and built from scratch A/S machine is launched. Present at the ribbon-cutting ceremony are Egil Anderson, designer, and Spaulding’s son, Brook, the inventor and patent- holder-to-be of the Boomerang 2-way Envelope. Also present are Ed Smithe, President of F.L. Smithe Machine Company, and Tim Cooney, Worcester City Mayor. Mr. Anderson is a retired employee of United States Envelope, and the right-hand man of Vincent Hayward, the designer of the United States Envelope VH machine that out-produced all other envelope folding machines on the market by a factor of 2 or 3 to one. Hayward, an old friend of Sheppard’s Vice President Hank Sawin, recommended Anderson for the job.

1991-1992
Sheppard decides to bet heavily on the creation of a new 2-way envelope that will incorporate the outgoing envelope, the reply envelope and a message using the new A/S machine for its manufacture. The decision to proceed is hastened by the doubling of the price of paper in just a few years as well as the skyrocketing price of power. These factors reinforced the thinking that the price of paper would not soon, if ever, be reversed. Sheppard’s safeguard would be its patent. Brook Spaulding took on the challenge, and within two years Sheppard is granted a patent for the new Boomerang Two-way envelope. 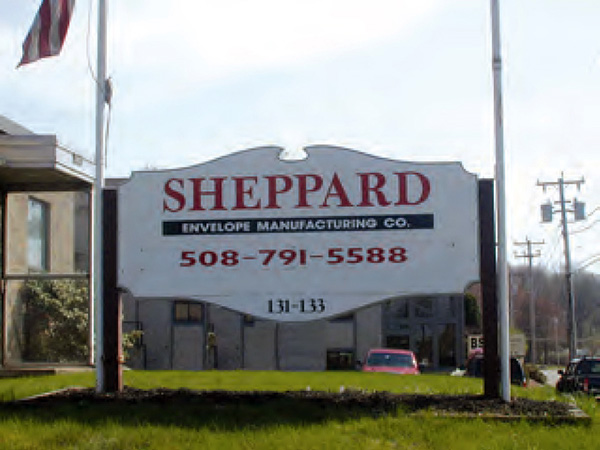 2002-2003
In the Fall of 2002, Sheppard sells its 3-story Envelope Terrace building in downtown Worcester and begins plans to move to a 50,000-square-foot single story building in Auburn, Massachusetts with excellent access to the Massachusetts Turnpike and Interstate 290. The old building is re-purposed to become the Biscuit Loft residential condominiums.

In December, work begins to renovate the new space. At the start of 2003, between snowstorms, the move begins from Envelope Terrace to the Company’s new home — a mere five miles away. The move entails removing windows and parts of walls to crane the folding machines from the third floor to the flatbed trucks below. The move takes a month to complete. 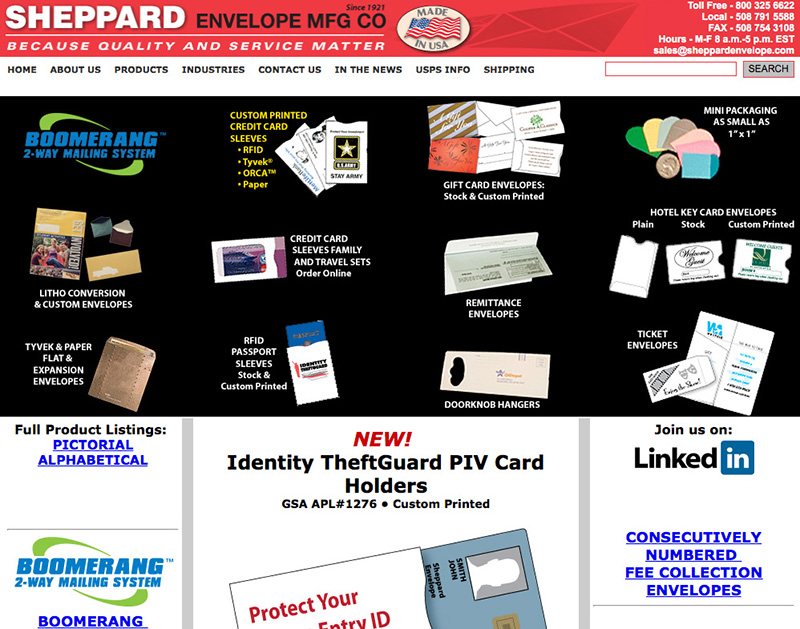 During this year, Sheppard launches its first and still evolving web site. It features niche envelope products. Manufacturing emphasis is placed on non-mailable as well as mailable envelopes and packaging.

2003-2016
Newer, heavier, more productive machines are added, and slower machines are sold or scrapped. Only 4 of its 12 folding or printing machines are holdovers from Envelope Terrace. Emphasis is placed on the high quality conversion of lithographed sheets into miniature packaging envelopes as well as catalog and booklet styles for the still growing direct mail industry. Sheppard wins Printing Industries of New England’s (PINE) Award of Excellence in 2007, 2008, 2013 (Pinnacle), 2014, and 2016.

Today, high quality and the meeting of promised delivery dates remain the mantra of Sheppard Envelope, “If it’s an envelope, we can make it.” 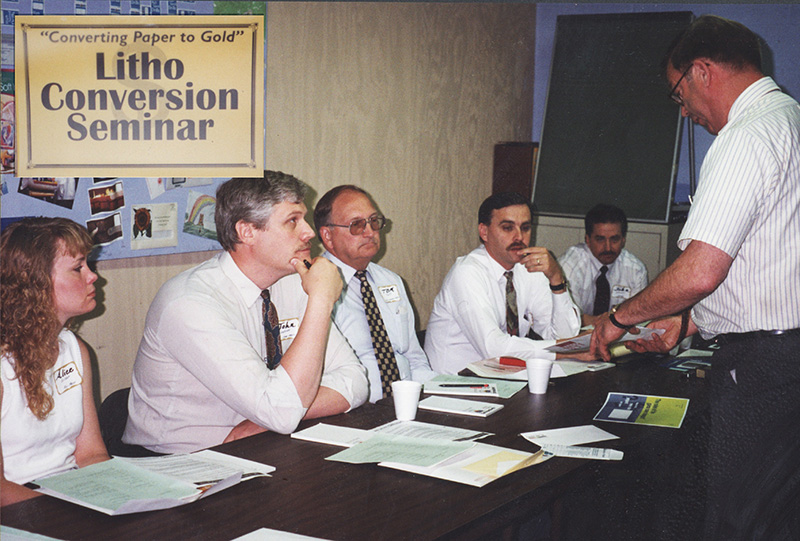 The advantages of the 2-way envelope begin to disappear: Within 2 years of bringing the Boomerang 2-way envelope to market, the price of paper starts to free fall to almost as low as where it began, wiping out one of the envelope’s major advantages of reducing paper consumption and cost by 25% or more. The newest envelope machines are running faster than ever and at speeds with which our A/S machine cannot keep pace. Pitney Bowes, Bell and Howell and Formax start paying attention to the single and two station inserter market. The USPS introduces new postal automation requirements that require sorting centers to put an additional destination postnet code at the bottom of the outgoing envelope, which is the face of the Boomerang’s reply envelope, and results in the reply envelope being caught in an endless loop on the return trip. Bill-paying (transaction) mail is replaced by electronic systems.

It is clear that envelope manufacturing reached its zenith nearly a quarter of a century ago. It is also apparent that the inexorable slide in transaction mail cannot be reversed. However, it is an ill-wind that blows no good, so that as long as the USPS does its job of delivering the mail in a timely and affordable manner there will continue to be new envelope manufacturing opportunities. These will not be huge volume opportunities as in the past, for those days are long gone, and in many cases so are the markets.

Sheppard’s commitment is to live within its core competencies, stay focused, stay current and stay relevant. If we do this, we know that our future will be secure, albeit within the confines of a shrinking industry, not withstanding the difficulty in attracting new, younger employees to join us.

Of the 76 founding members of the Envelope Manufacturers Association, 18 remain. Since 2000, approximately 8 new envelope manufacturers have been established.

A parting thought: How many industries have had more than 50 years of growth, or have lasted more than 75 years? Now you know another – envelopes, of which we are very proud to be a part.

‹ Papercone up Tension Corporation ›
Back to Top