Lloyd W. Bertaud's airmail service was unremarkable. Before he joined the service, he test flew airplanes, including the infamous JL-6 all metal monoplane built by the Junkers company. On December 29, 1921, Bertaud and co-pilot Eddie Stinson set a world endurance record in that airplane, carrying 350 gallons of gas and 23 gallons of oil, flying through a snowstorm over Long Island, New York.

After his years in the airmail service, Bertaud continued to try and make aviation history. Along with co-pilot Clarence Chamberlin, Bertaud hoped to pilot a airplane called "Columbia," a single-engine monoplane designed by Giuseppe Bellanca, across the Atlantic for the first non-stop flight between New York and Paris. Two other sets of pilots and airplanes were also getting ready to make that historic trip, including "The Spirit of St. Louis," to be flown by ex-airmail pilot Charles A. Lindbergh. The groups waited together at Roosevelt Field near New York City for a break in the weather to begin their journeys. On May 20, at 7:54 a.m., only one pilot believed the slight break in the weather was enough to get through, and Charles Lindbergh went on to make aviation history.

Bertaud and his old airmail buddy James DeWitt Hill began making plans for another trans-Atlantic flight. This one would take them from New York City to Rome. They found a sponsor in newspaper giant William Randolph Hearst. Flying an aircraft named "Old Glory," the pair took off on September 6, 1927 at 12:23 p.m. Hill was flying the airplane, Bertaud manning the radio, and Philip Payne riding as an observer for Hearst's paper.

The airplane was last heard from at 3:55 p.m. when a SOS signal was sent out. Ships were sent out immediately to search the area, but no sign of the airplane or crew. On September 12, the S.S. Kyle located some of the wreckage. The crew was never found. 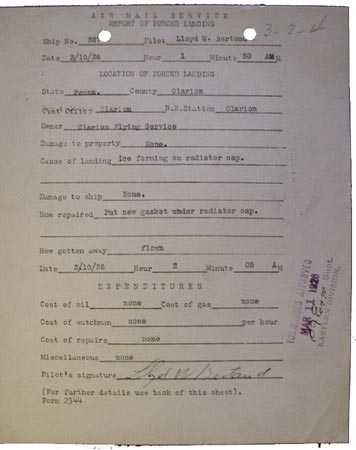 Learn more about Bertaud and Hill's flight in "Old Glory."