Ira Biffle first flew as a pilot for the army air service where he gained a reputation as a demanding instructor. He found that his airmail service supervisors were just as demanding. After landing 55 minutes late because of fog, he was suspended without pay. Only the intervention of ex-pilot Chief of Flying James C. Edgerton kept Biffle on the payroll.

After he left the Air Mail Service on October 22, 1919, he flew for different organizations, including the Nebraska Aircraft Corporation in Lincoln, Nebraska. While serving as a flying instructor there in April 1922, Biffle taught flying to a lanky young man named Charles Lindbergh. In "We," written by Lindbergh in 1928, he noted that Biffle's reputation as "the most ‘hard boiled' instructor the army ever had during [World War I]" was still well known among the aviation students.

Ira Biffle returned to flying for the Air Mail Service on August 6, 1923 and stayed on as a pilot until the service was turned over to commercial companies. In 1930, he was forced to retire as a pilot due to his failing eyesight. Biffle passed away on April 7, 1934 at the age of 44 of heart disease. 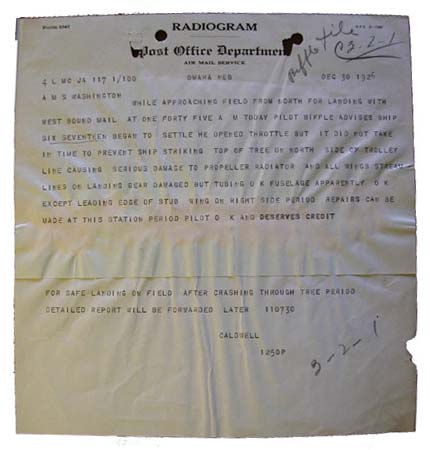