Blind Reading: The Dead Letter Office Album is a small, leather bound scrapbook assembled sometime after 1883. The volume contains twenty-one clippings from the front of envelopes postmarked between 1883 and 1884. The clippings include difficult to read addresses that were deciphered by clerks in the Dead Letter Office. Once the correct address was known, the letters were sent on to their destination with a request to return the envelope, which was then mounted in the album with the correct address written on the back of each album page. Although the exact purpose of the album is unknown, the binding—with its rich red leather and gold tooling—indicates something produced as a keepsake rather than a training guide for new clerks. In 1984, the album came into the collection of the National Postal Museum, then housed at the National Museum of American History. 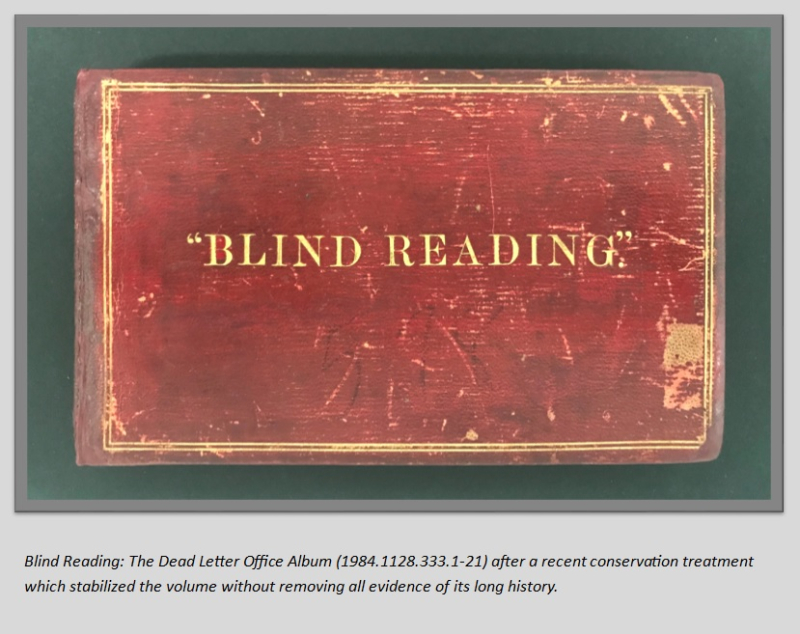 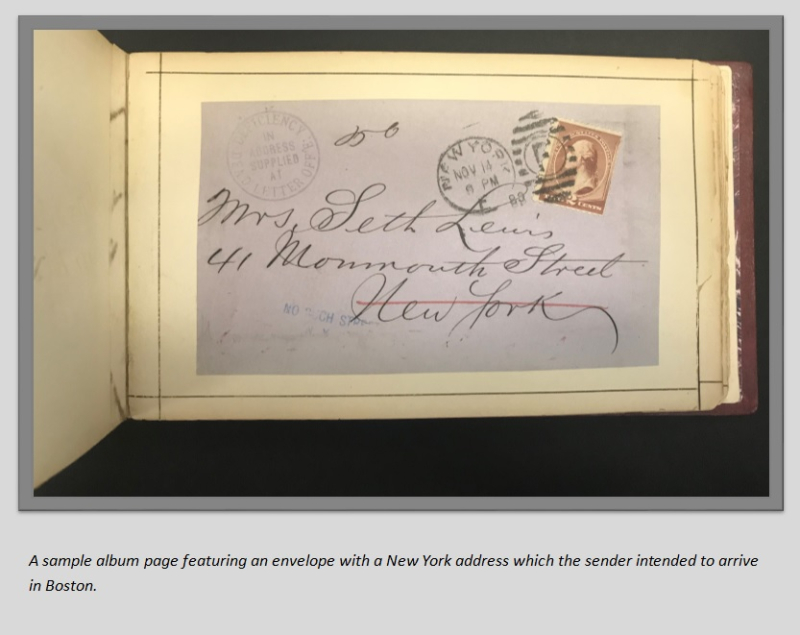 The condition of the album at the time it was acquired made it difficult to use or exhibit. Extensive damage to the cover, including a missing back board, made the album difficult to handle without risking further damage. Mid twentieth century repairs to the cover and marbled endsheets using commercially available book repair tape were causing further damage each time the album was opened. Loose and missing album pages posed additional care and handling challenges.

Assembled at a time when clerk positions in the Dead Letter Office were some of the first positions in the Postal Service available to women, the album is of particular interest for inclusion in an upcoming project related to the Smithsonian’s American Women’s History Initiative. A request for more information about the item inspired staff at the National Postal Museum to take a closer look at treatment options.

The major issues to address in stabilizing the album included removing the book repair tape used to mend the flyleaf and first page, repairing and re-adhering loose album pages, and replacing the missing back board. 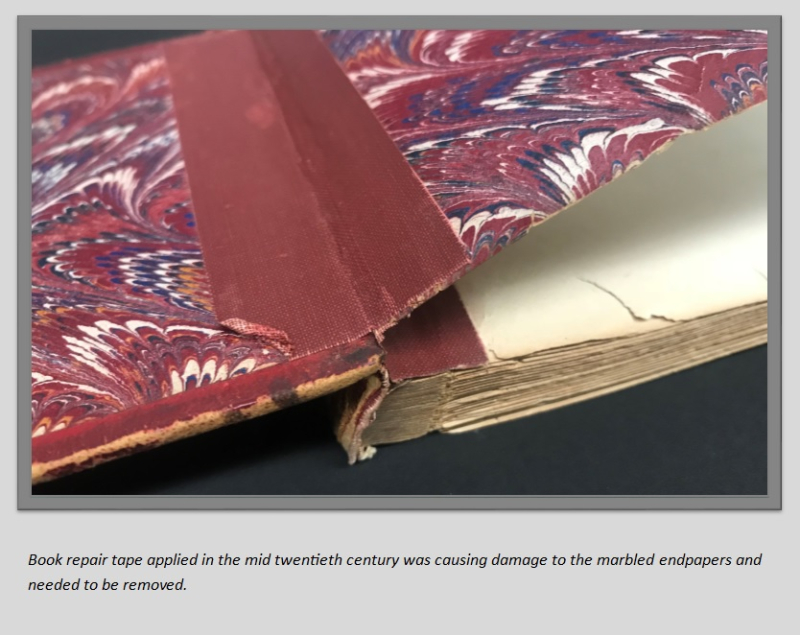 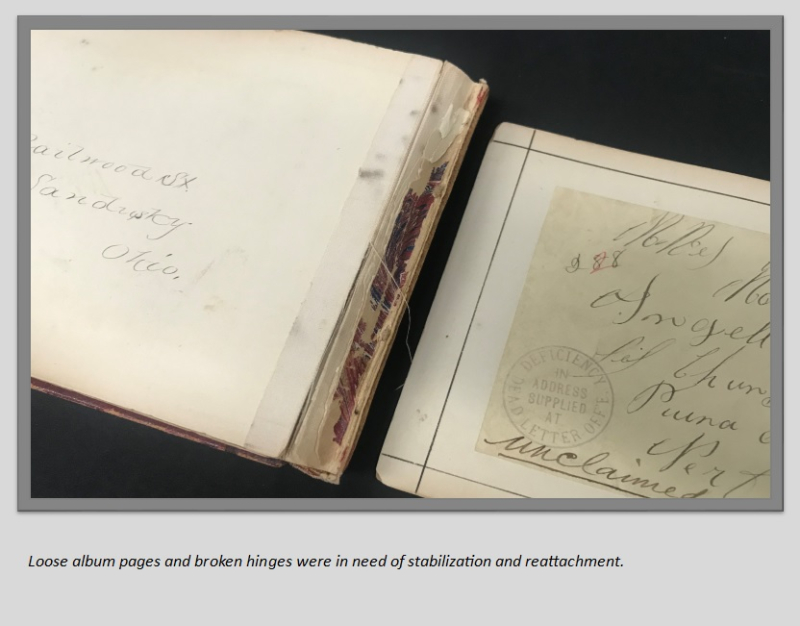 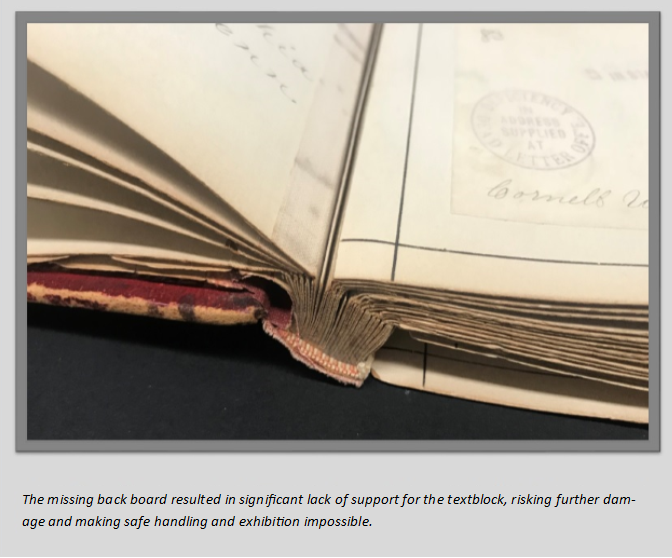 As with every conservation treatment, curatorial input was essential to help determine the appropriate level of treatment and the amount of change that could be tolerated by the item without compromising its value as an artifact. In some cases, damage is an important part of an item’s history and needs to be preserved. In other cases, evidence of daily wear and tear may or may not be diminished in the interest of stabilizing the item and preventing further damage. In the case of Blind Reading: The Dead Letter Office Album, it was decided that the item should be repaired to make it functional but that evidence of its history, in the form of cover scratches and abrasions, should be preserved whenever possible.

Clear treatment goals were established by the conservator and the curator:

Treatment would rely heavily on a variety of well-established conservation materials, including long fibered Japanese papers known for their strength and durability, water soluble wheat starch paste to aid in easier reversibility when the need for future treatment arises, and artist grade acrylics preferred for their color fastness. Treatment time was estimated at 40 hours, including the time to complete extensive written and photographic documentation.

Removal of the book repair tape was achieved with thick poultices of methyl cellulose applied directly to the tape carrier in order to soften the adhesive, which allowed the tape to be removed easily and with little damage to the marbled paper endsheets. 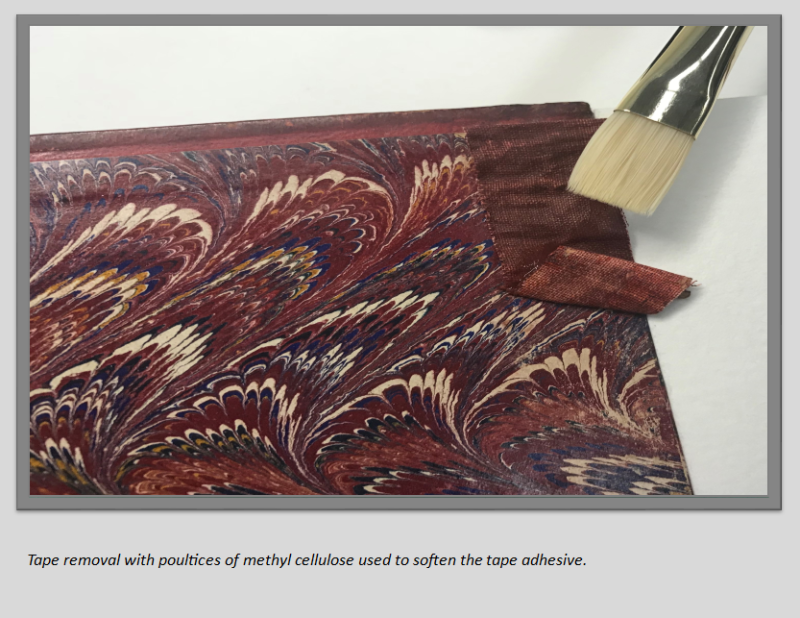 Tape removal revealed previous losses on the flyleaf, which were repaired with Japanese paper. An additional overlay of very thin Japanese paper printed with a scanned image of the original pastedown resulted in a subtle, well-integrated repair. 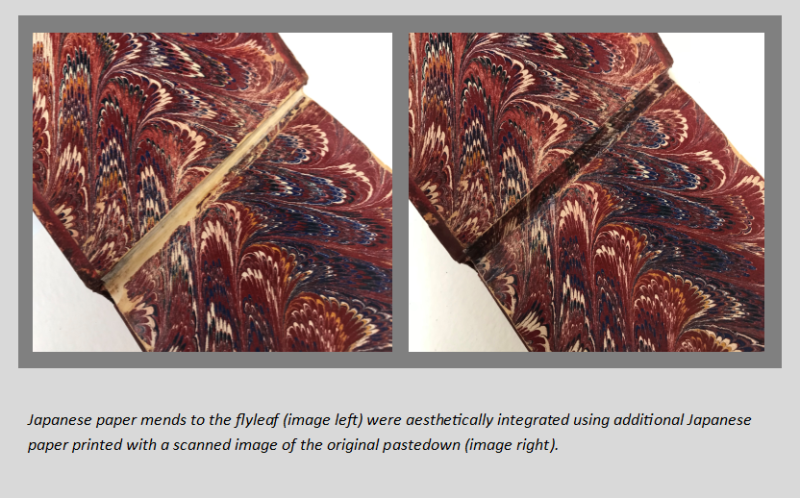 The album pages were in remarkably good condition. Minor losses along the page edges were repaired only if they were unstable and might lead to further loss. Only one page required a major repair, with layers Japanese paper toned to fill a missing corner. 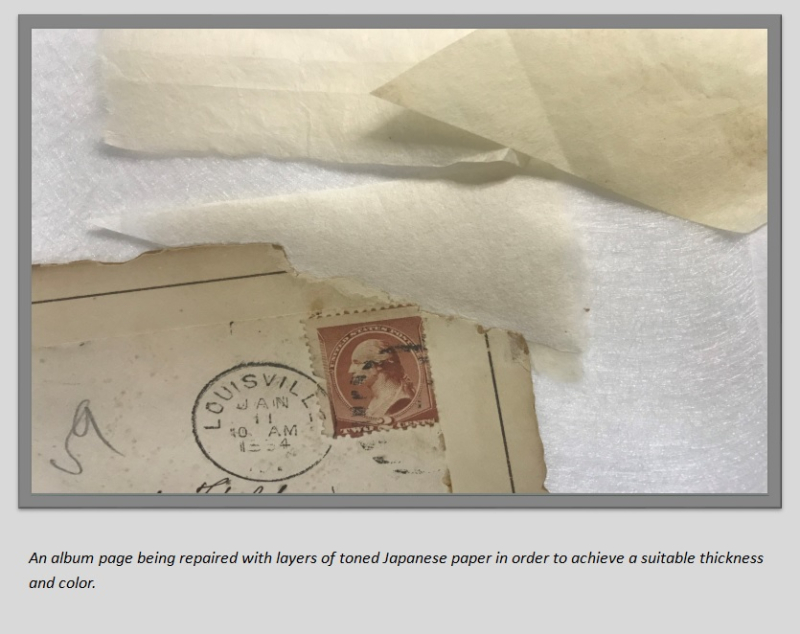 Several album pages were detached and, upon further inspection, it was clear that other pages had become loose in the past and had been reattached, often in the wrong location or orientation, including pages that were backwards and even upside down! 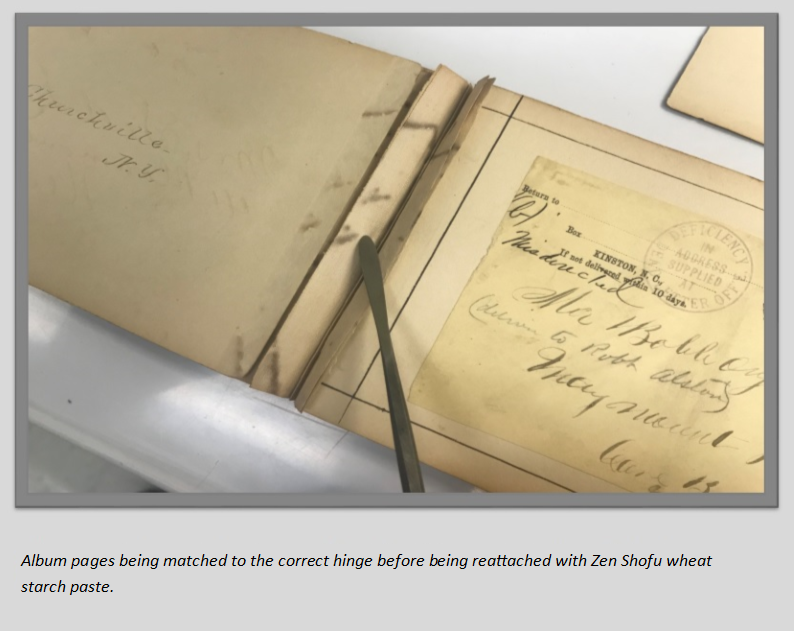 Fortunately, marks on the album hinges and corresponding pages allowed for easy matching to determine the original location of each page. Hinges were reinforced as needed with Japanese paper prior to reattaching loose pages.

Recreating the Missing Back Board

The missing back board was recreated using various thickness of acid-free museum board laminated together and then sanded at the edges to match the shape of the original front board. One of the most challenging aspects of the project was recreating the color and patina of the original leather with Japanese paper. Multiple washes of acrylics achieved the depth of color needed to replicate the appearance of the front board while a final application of SC 6000 reproduced the sheen of the original cover. 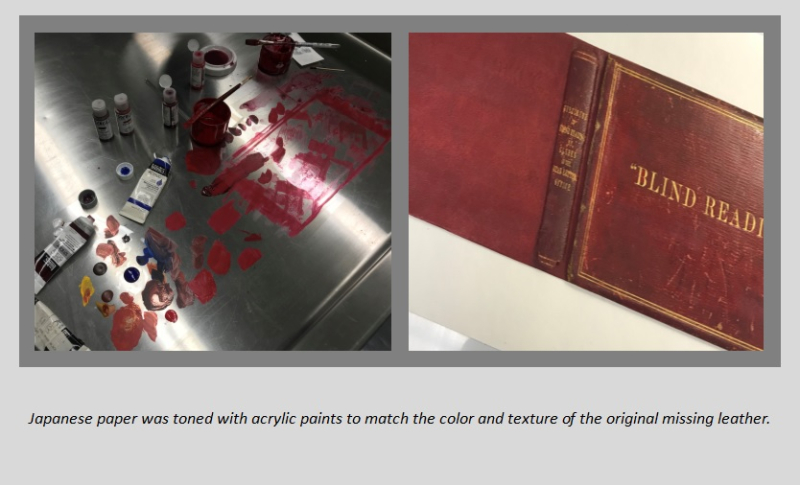 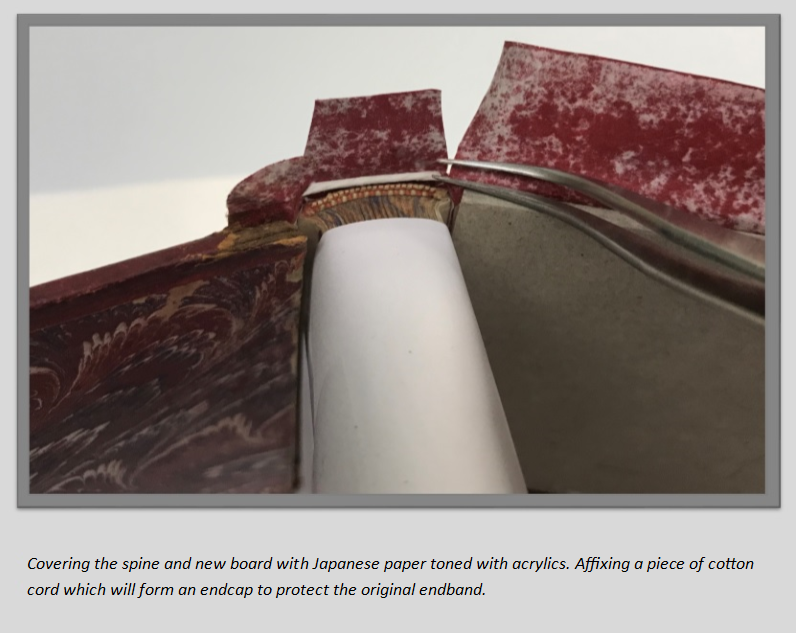 Leather is also an option for book repair, but the availability of lightfast leather dyes can make repair with leather problematic. Given the exhibition potential for Blind Reading: The Dead Letter Office Album and the likelihood of exposure to higher light levels, it was decided that repair with Japanese paper toned with acrylics would be a better long term preservation solution.

Prior to attaching the new cover, replacement endsheets for the missing back board were created by scanning the original pastedown and printing the image onto acid-free paper. The new endsheets protect the last page of the album and blend in so as not to distract the reader. 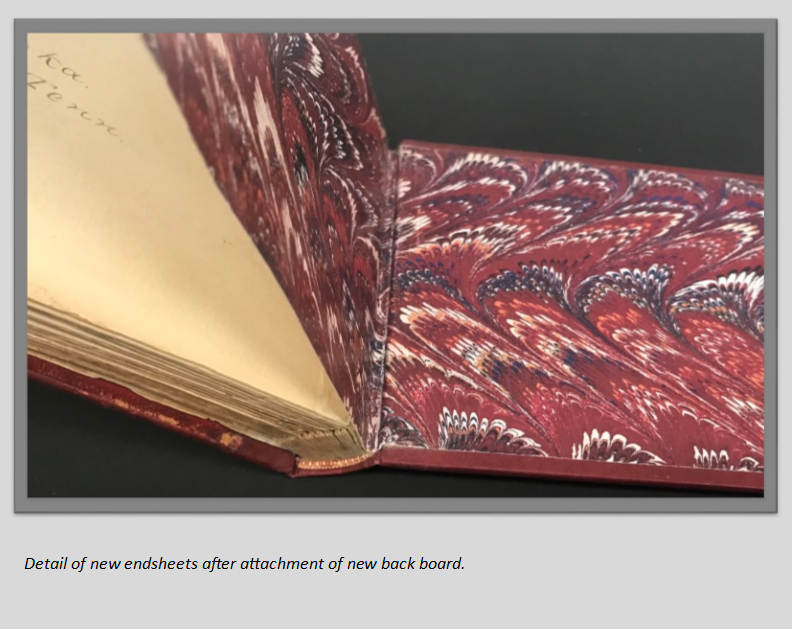 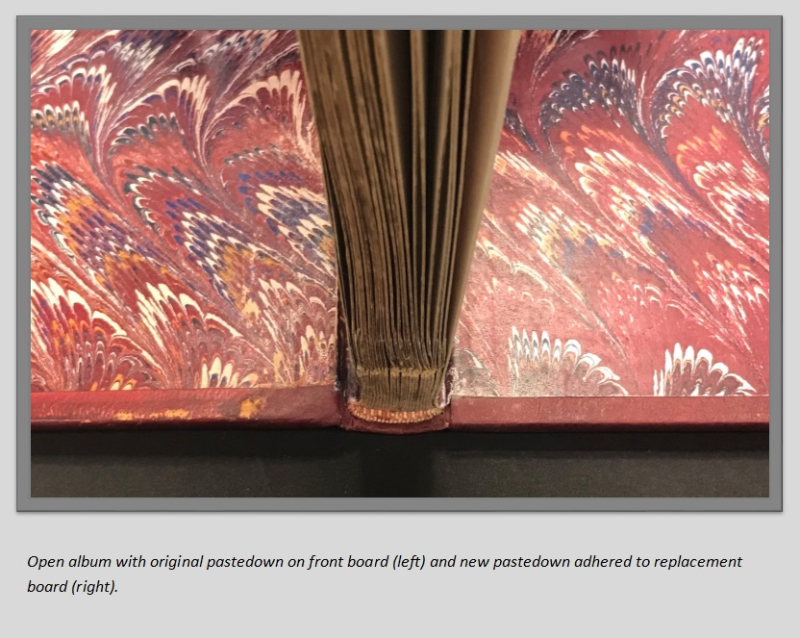 One of the pleasures of having Blind Reading: The Dead Letter Office Album in the conservation lab has been sharing its story with lab visitors and tour groups. As treatment proceeded and the album became easier to handle, it was exciting to see how engaged visitors became with reading the letter addresses and trying to decipher the correct address, recreating the process that the clerks in the Dead Letter Office developed over 135 years ago. Now that treatment has been completed, the newly conserved volume can be handled easily by curators and collection managers during outreach activities and may be safely exhibited when the need arises.