Which stamp should represent the the United States?

The Smithsonian National Postal Museum is conducting a poll to see which U.S. postage stamp should represent the United States in the new International Collections Exhibit of the new William H. Gross Stamp Gallery, scheduled to open in the fall of 2012.

The International Collections Exhibit (draft design above), will explore geography, ancestry, history, culture, the environment, and other global topics and themes through interpretive displays of stamps and other philatelic items from around the world. The collections will include a permanent exhibit of important international stamps as well as rotating exhibits of other key materials. The exhibit will feature original objects and interactive displays-including a map of the world with sliding windows that reveal stamps and other objects associated with each region.

Additionally, the gallery will feature one stamp from each country, including the United States. The Philatelic Department of the museum has chosen these seven stamps that it believes would best represent our great nation:

Cheryl Ganz, Chief Curator of Philately, would like visitors, stamp collectors, fans, and members of the public to Cast Your Vote to help decide which of the seven stamps will be chosen to represent the United States.

Voting will be open until midnight, January 20, 2011. The stamp receiving the most votes will win. 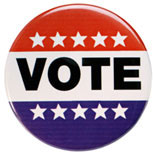