Today marks the birthday of probably the most famous American stamp collector to ever live. It should also be noted that Franklin Delano Roosevelt was one of America's most important and beloved Presidents. Roosevelt, first elected to the Oval Office in 1932, has the distinction of being the only President to serve more than two terms in office. His administration covered two of the most troubling periods in American history, the Great Depression and World War II. Most important to world history, Roosevelt's leadership during World War II propelled America and its allies to victory over Germany and Japan.

Since Roosevelt understood the power of visual imagery, he changed the look of postage stamps while President to convey messages of hope, optimism, and the solidity of the federal government. The Smithsonian National Postal Museum has recently opened an exhibit featuring this Stamp Collecting President entitled Deliverying Hope: FDR & Stamps of the Great Depression.

Learn more about this exciting exhibit » 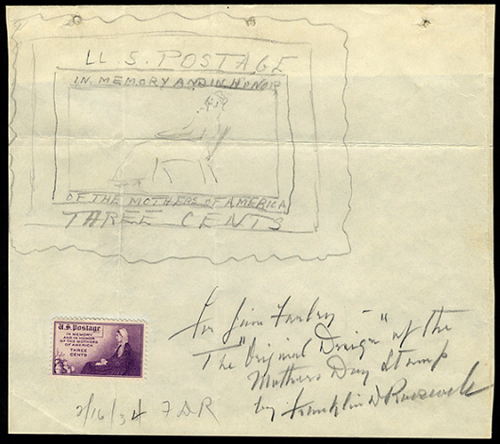 Although originally intended to honor artist James Abbott McNeill Whistler, at FDR’s direction the stamp as issued honored mothers on Mother’s Day mail. The designer altered the painting Whistler’s Mother by removing the background and the woman’s feet and adding a vase of flowers.