John P. Charlton, Jr. was only on his fifth day of flying as an airmail pilot when he died in a crash near Long Valley, New Jersey. Charlton was flying the Washington, D.C. - New York route when at about 2 p.m., witnesses said they heard a plane approaching from the west. Although the valley was clear, there was fog on top of nearby Schuley mountains and along an elevated ridge north of town. The sound of an airplane engine passed to the east, north, then west before stopping suddenly. A search party found the airplane on top of the mountain, inverted, tail in the air and Charlton's body strapped in the cockpit. 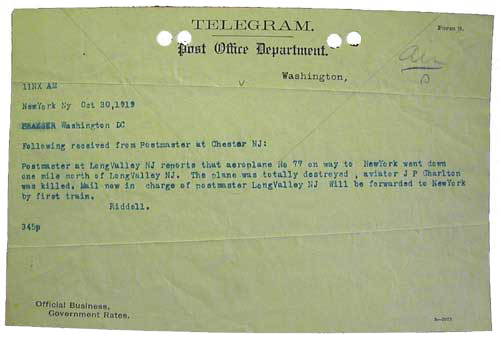