Christensen snagged a speed record when he flew the Omaha – Chicago Mail on December 14, 1920 in the then amazing time of two hours, 45 minutes. Christensen had averaged about 162 mph.

J. Titus Christensen flew out of Chicago on April 29, 1921 at 7:05am with the eastbound mail. The weather got worse as he approached Cleveland. He landed 12 miles southwest of Sandusky, Ohio in order to call for a weather report. The field at Cleveland reported a 400' ceiling and three quarter mile visibility. Christensen decided he could make it and took off, following the Cuyahoga River. He came down too low looking for bearings and was right above the river. He was too low to get his airplane out. There were tall buildings on each bank and high bridges ahead and behind. He threw his de Havilland into a tight circle, trying to clear it all, but crashed into railroad tracks 20 feet from the river. Christensen was burned to death in the crash. A local newspaper noted Christensen could have crashed his airplane in the crowded streets of Cleveland, but chose instead to stay over the river.

The Washington Post ran the following story on the crash.

SHUNS STREET LANDING; BURNS IN MAIL airplane
Pilot Avoids Risk of Killing People – Drops on Railroad Tracks in Cleveland.
CLEVELAND, April 29.—Rather than attempt a landing in a street and thus endanger the lives of many persons, J. T. Christensen of Chicago, air mail pilot, sacrificed his life today when he was forced to seek a landing in downtown Cleveland because of engine trouble.

Unable to see because of a heavy fog, the pilot fell 200 feet to the Erie Railroad tracks at Scranton and University Roads and was buried beneath the wreckage of his machine. He was burned to death when the gasoline tank exploded, setting fire to the debris.

Christensen was making his first trip on the Chicago-Cleveland route, having left Chicago this morning. He was recently transferred to that division from the Cleveland-New York route. He held three speed records. 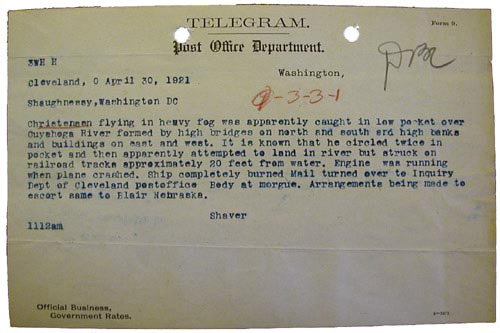