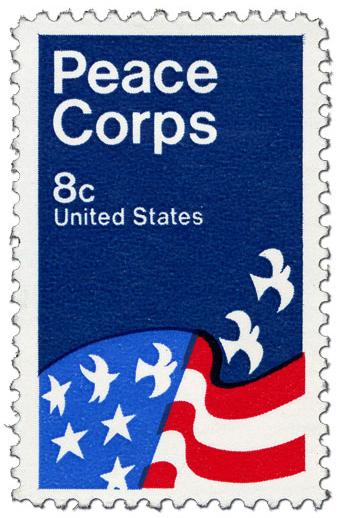 In 1960, presidential candidate John F. Kennedy stood on a staircase at the University of Michigan and summoned students to service in developing countries. On March 1, 1961, the newly elected President Kennedy signed an executive order establishing, an agency “…responsible for training and service abroad of men and women of the United States in new programs of assistance to nations and areas of the world…¹” This agency was the Peace Corps.

Anouncer: Ann Arbor had its first visit from a presidential candidate in about twenty years early this morning, when John Kennedy arrived from New York City.

Crowds had been gathering since about 10 o'clock last night.

The senator arrived at the Michigan Union at about 1:45 a.m. this morning.

Some 5,000 persons were on hand to greet him at that time.

John Kennedy: I want to express my thanks to you, as a graduate of the Michigan of the East, Harvard University. I come here tonight [static] but I am delighted to have the opportunity to say one or two words on this campaign which is now coming into the last three weeks.

I think in many ways it is the most important campaign since 193[? static], mostly because of the problems which press upon the United States, and the opportunities which will be presented to us in the 1960s.

The opportunity must be seized. And the judgment of the President, the vigor of the executive, the cooperation of the Congress, through these I think we can make the greatest possible difference.

Interpolation by broadcast announcer: He challenged the assembled students to work for the United States. And then he mentioned the fact that it was getting quite late and all should go to bed.

How many of you who are going to be doctors, are willing to spend your days in Ghana? Technicians or engineers.

Kennedy: How many of you are willing to work in the Foreign Service and spend your lives traveling around the world?

I think will depend the answer whether a free society can compete.

I think it can! And I think Americans are willing to contribute.

But the effort must be far greater than we've ever made in the past.

And, therefore, I am delighted to come to Michigan, this university, because unless we have those resources in this school, unless you comprehend the nature of what is being asked of you this country can't possibly move through the next ten years in a period of relative strength.

So I come here tonight to go to bed!

But I also come here tonight to ask you to join in the effort...

There is certainly a greater purpose, and I'm sure you recognize it.

And, therefore, I do not apologize... for asking for your support in this campaign.

I come here tonight asking your support for this country over the next decade. Thank you.

During the height of the Vietnam War, the Peace Corps petitioned the Stamp Advisory Committee to issue a stamp commemorating the Peace Corps’ 10th Anniversary. This was a troubling time for the agency. The Nixon Administration had merged the Peace Corps into an umbrella organization, ACTION, and its future looked uncertain. The Peace Corps felt that a commemorative stamp might help recruitment.

The postal officials believed that a 10th anniversary Peace Corps stamp did not meet the criteria of the Citizen’s Stamp Advisory Committee. Nonetheless, Peace Corps officials provided eight sketches as potential stamp designs. The Committee still opposed the stamp and felt that the designs could be developed for an envelope or postal card. Peace Corps director Joseph Blatchford continued to press for a stamp and suggested that designs that had been submitted for their 10th anniversary poster contest be considered as potential designs for the stamp.2

The contest’s winning design, by David Hale of San Francisco, was deemed unsuitable for a stamp and, instead, a design by first runner up, David Battle of Yellow Springs, Ohio, was selected as the concept for the stamp design. Battle’s design for a poster used patriotic colors of red, white and blue. The bottom of the poster featured a simulated U.S. flag whose stars morph into doves—with one dove going into space.

Mr. Battle, a native of Britain, still lives in Ohio and, as one aspect of his design practice, has been the art director of the Antioch Review for 38 years. In a telephone interview he recalled the events that led up to his creation of his poster and his notification that his design was to be turned into a stamp commemorating the Peace Corps.

In May of 1971, Mr. Battle entered the contest for a recruitment poster honoring the 10th anniversary of the Corps. At the time that he saw the call for entries, he was vice president and director of graphic design in a group design studio, although he subsequently developed his own private practice. He had an idea about a week before the deadline. The night before it was due, he sketched his design on the “back of an envelope” before he returned to his studio, where he quickly created the Peace Corps poster and submitted it the next day. Battle was the first of nine runner-ups awarded a $500 prize. Although Mr. Battle’s original poster design was not published, the Peace Corps issued a recruitment poster in the 1970s using his design with different wording.

The artist was never told by the Peace Corps or the postal officials that his design was being used as the concept for the stamp. His first awareness of the event was the fact that his neighbors were being interviewed as part of a background check prior to an issuance of an invitation by the Peace Corps for him to travel to Washington, D.C. for the stamp unveiling.

Mr. Battle and his family have fond memories of travelling to Washington for the announcement of the stamp where he was honored at a reception in the Capitol, hosted by Joseph Blatchford, then Director of ACTION and Representative Clarence J. Brown of Ohio. He could not have foreseen that his design would end up being copied and modified in many ways in the ensuing years. In 1994 Battle sold the copyright of the design to the Peace Corps hoping that the agency would protect the integrity of the design against careless adaptations.

The eight cent Peace Corps stamp was printed in four panes of fifty in the photogravure method on an Andreotti press by the Bureau of Engraving and Printing. The designer was the well known and respected graphic artist Bradbury Thompson who adapted Battle’s design to fit the restrictions and requirements of the postage stamp. In a note to Gordon Morison, then Division Manager of Philatelic Affairs, he explained why he added an extra “bird” outside the flag. He felt that it made the design more effective since the poster design was square, whereas the stamp was vertical.3

The stamp was issued on February 11, 1972. The first day of issue ceremony was held at the National Museum of American History and Technology at the Smithsonian Institution, now known as the National Museum of American History. In attendance were Daniel Boorstein, the museum’s director, Joseph Blatchford, Director of ACTION and Senior Assistant Postmaster, Harold Faught.

After the stamp was issued, several people wrote letters complaining that the use of the flag was disrespectful or that the doves were a reference to the peace movement.4 Mr. Battle said that the doves were not inspired by the “peace movement” but rather represented the birth of an idea reaching out into an international arena. The stars morphing into birds represent a daring venture, much like the Peace Corps itself.5 The juxtaposition of different themes and imaginative elements are a hallmark of Mr. Battle’s work.

As the Peace Corps celebrates its 50th Anniversary it continues to thrive and change with the times. It currently has 8,655 volunteers in 77 countries working in traditional roles such as education, health and agriculture as well as information technology and business development. 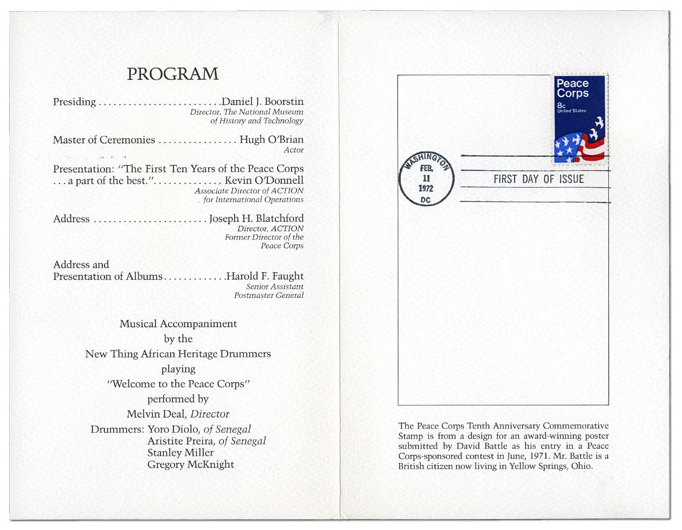 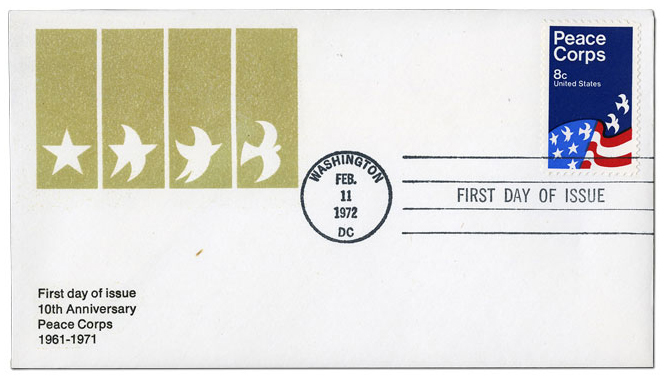