This stagecoach was built in Concord, New Hampshire, in 1851 by Lewis Downing. Downing, who operated a wagon and wheelwright shop in Concord, developed a wagon-making business with J. Stephen Abbot in 1828. The idea for the partnership had come after listening to a steady barrage of complaints from Jonathan Wheelock, Downing's father-in-law. Wheelock was a stage driver and knew firsthand how miserable the ride was aboard most stagecoaches. Abbott and Downing wanted to create a comfortable, elegant stagecoach. Their Concord coach, known by the manufacturers as a "mail coach," was an immediate success. 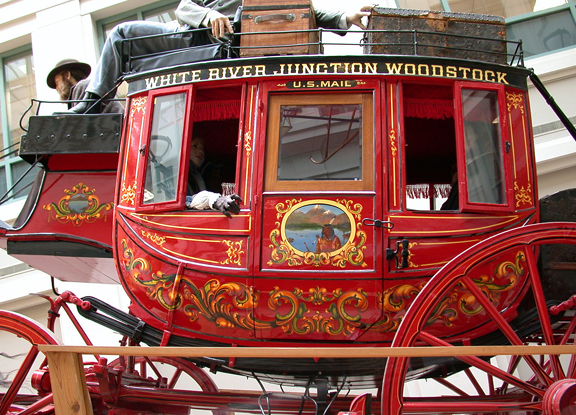 Concord-style mail coaches remained in use in the United States well into the early 1900s. Elegantly painted in bright colors and decorated with oil paintings on the doors, the fancy wagons were also built to stand up to the demands of the nation's rough and rugged roads. The coaches were built in six, nine and 12-passenger sizes (not counting passengers who rode on the roof when the coach was full). The mail was typically carried in a space under the driver's seat while baggage could be held by the rack on top or in the rear compartment.

The Concord coach did provide a smoother ride on eastern roads, but on western roads, it was a different matter entirely. For one thing, the glass windows in this stage coach would have not been practical for models that would be used in the American west. Eastern roads were not good, but they were smooth compared to crude western roads. A one-day journey along a western overland mail trail would be enough to shatter all the windows. On western trails, the Concord coach's design was no match for the raw, uneven trails. As one traveler noted, "[We were] thumping and bumping at a rate which threatened not to leave a whole bone in my body. . . . To see the heavy mail wagon whizzing and whirling over the jagged rock, through such a labyrinth, in comparative darkness, and to feel oneself bouncing--now on the hard seat, now against the roof, and now against the side of the wagon, was no joke."

After twenty years in business together, Abbott and Downing went their separate ways in an amicable split. Downing continued to build Concord coaches and the two companies merged again in 1865, when Lewis Downing, Jr. and J.S. and E.A. Abbott Company formed the Abbott-Downing Company. Coaches, wagons and carriages continued to be manufactured under that company's name until 1919.