Built in Liverpool, England, the Oreto sailed for Nassau on March 22, 1862. On August 17th, she was commissioned in the Confederate States Navy at Green Cay, Bahamas and officially christened the Florida with Captain John Newland Maffitt, in command. 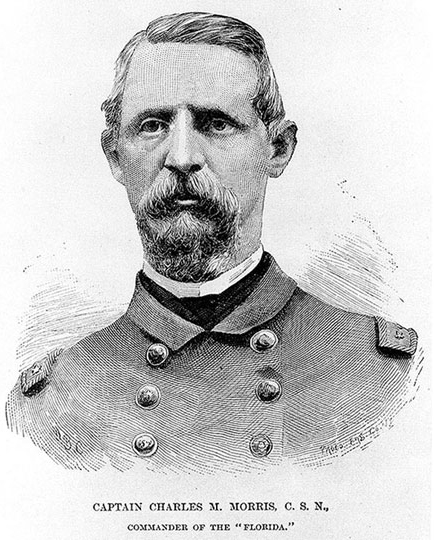 Armed with ammunition and crewmen, she set sail for Bermuda. However, shortly after leaving Nassau, the crew came down with yellow fever, so she put into Cardenas, Cuba for medical aid and new recruits. Still lacking a full complement of crew and additional supplies to make her guns fully functional, Maffitt sailed the Florida to the port of Mobile where she stayed until January 16, 1863. For the next six months her crew of twenty officers and 116 men¹ devastated Union shipping off the coast of the United States until she once again set sail for Bermuda.

The Florida was in a bad state of disrepair when she finally arrived in Bermuda where some minor repairs were made. She needed to go into dry dock and on July 25, 1863 she left Bermuda bound for an English port where spare parts could be more easily obtained.²

However, because the three months specified by British law had not elapsed since her last coaling at a British port, she was unable to land in Britain. Forced to sail on, the Florida finally arrived in Brest, France on August 23rd, ending her first cruise, during which she had destroyed 19 Union ships and bonded* six.3

The Florida remained in French government dry dock from August 23, 1863 until February 12, 1864, when she left for the West Indies under the command of Lt. (soon to become Captain) Charles Manigault Morris.

Shortly before the Florida’s departure from Brest, a letter was written to Mrs. William G. McAdoo, formerly Mary Faith Floyd, by an unknown crew member, possibly CSN Lt. Richard S. Floyd.  Mrs. McAdoo and her husband William Gibbs McAdoo, a captain in the Confederate Army 4 had settled in Marietta, Ga. after fleeing Knoxville, Tennessee, when Union troops occupied the city. 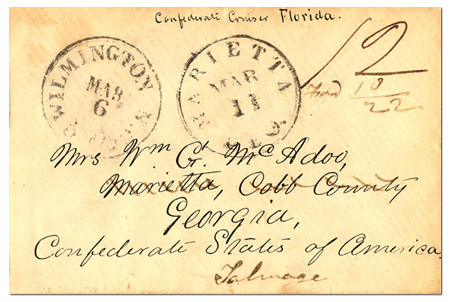 The letter was sent under cover to an agent in England (probably Alexander Collie & Co. in London) who in turn sent it under cover aboard the Cunard steamer Arabia, which left Liverpool on January 23, 1864 and arrived in Halifax, Nova Scotia on February 4. At Halifax, the letter was transferred to the Cunard branch steamer Alpha, which left on February 5 and arrived in Bermuda on February 10. There it was held until the next departure of the Index, a Collie-owned blockade runner, which left on March 1 and arrived in Wilmington on March 5, 1864.5 The cover was marked with 12 cents due in Wilmington, was sent on to Marietta, Ga., then forwarded to Talmadge, Georgia, and was finally delivered with an additional "10 cents" collect postage charged for forwarding.

In February, 1864, the Florida left Brest and continued to terrorize Union shipping in the Atlantic and Caribbean. On October 4, 1864, she arrived for refueling at the neutral port of Bahia, Brazil. On October 7 while the Florida was still in port, she was captured by the USS Wachusett. Towed to sea, she was sent to the United States as a prize despite Brazil's protests that this was a clear violation of their sovereignty. This signified the end of the Florida’s career as a Confederate cruiser, during her second cruise she had seized thirteen ships, destroyed eleven and bonded two.6

The Florida, during her two years of operations against Union commerce, was one of the most profitable military investments made by the Confederacy.7 The damage she caused was physical, immediate and long range, but it could not have been accomplished without the able leadership of the resourceful commanders, operating against overwhelming odds.

Note: A longer version of this article including n illustration of the only other surviving cover from the Florida can be found in “CSS Florida Blockade Mail,” The Confederate Philatelist, 2009, 54(4): 35–37.

*Bonded – A captured ship that was released upon promise of payment of an indemnity at the end of the war and permitted to carry Florida’s prisoners to safety.