Motivated by dreams of wealth and plans to establish a permanent settlement in the New World, on May 13, 1607, one hundred four English colonists landed on the shore of the James River in a region occupied by Powhatan Indians. There they established the colony of Virginia, naming its capital "Jamestown." In addition to being the first permanent English colony in North America, Jamestown was the first seat of English government in Virginia and the place at which the first representative government met in 1619. [The capital moved from Jamestown to Williamsburg in 1699.]

The settlers constructed a small triangular fort as a base from which to exploit the New World's gold and silver. Rather than the success they had imagined, they suffered disease, malnutrition, drought, poor leadership, conflicts with the Powhatan Confederacy, and many deaths. By 1614, however, they recognized the viability of tobacco as a cash crop, and this breakthrough redirected the colony's development and subsequent labor needs. The first recorded arrival of Africans in English America had occurred by 1619. 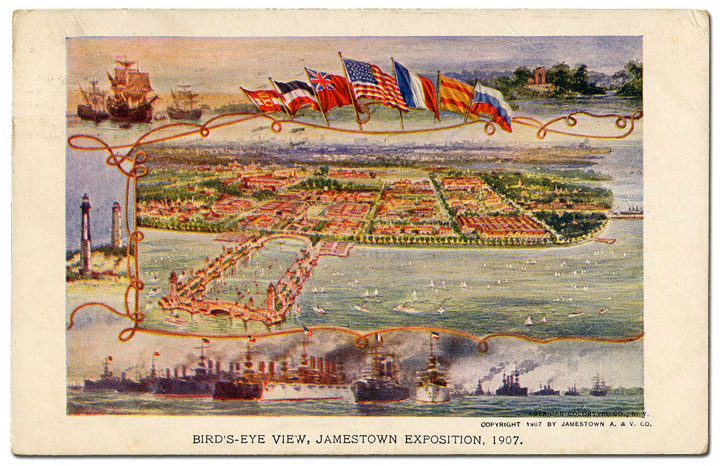 Postcard View of the 1907 Jamestown Exposition

In 1907, the Jamestown Tercentennial Exposition celebrated the 300th anniversary with a fair on the shore in Hampton Roads, near Norfolk, Virginia (currently part of the Norfolk Naval Base). The exposition featured brick architecture in keeping with the style of Virginia's colonial mansions and exhibits that displayed American industrial progress. This exposition differed from previous fairs in that it had a strong military presence and international naval participation. On April 26, 1907, the first day of the exposition, President Theodore Roosevelt arrived by yacht to review the North Atlantic fleet and to make an opening address at what many called the "greatest naval rendezvous in the history of the world." 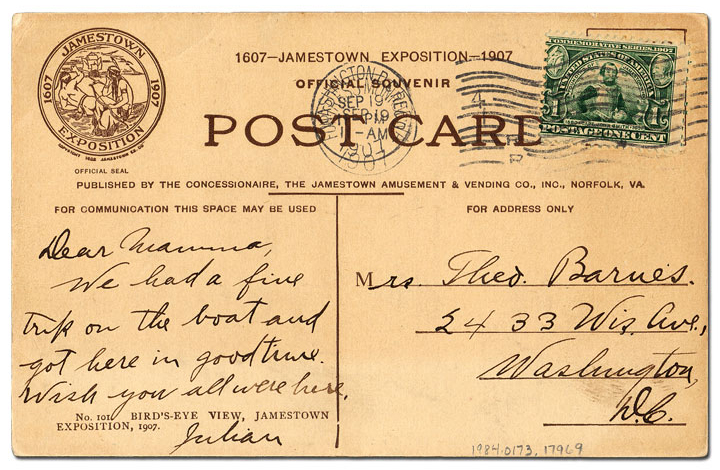 Reverse of Postcard sent by a visitor

Organizers of the Jamestown exposition had requested that the Post Office Department issue a set of commemorative stamps, as it had done for other fairs since the 1893 World's Columbian Exposition. Postmaster General George B. Cortelyou initially declined, stating that the post office did not issue special postage stamps in commemoration of expositions. When President Theodore Roosevelt expressed his desire that the stamps be issued, however, Cortelyou quickly changed his mind.

At the outset, the Post Office Department planned two denominations, a 1¢ and a 2¢, to meet the domestic postcard and letter rates, respectively. The stamps were to feature images of the ruins of the historic Jamestown church and the arrival of the English ships. Post Office officials, however, anticipated public disappointment should portraits of Captain John Smith, the colony's military commander and civil leader, and Indian princess Pocahontas not be included.

Moreover, when the Department of the Navy confirmed that there would be a vast assemblage of foreign war ships in Hampton Roads for the exposition, postal officials saw the need for a 5¢ stamp to meet the foreign postage rate. As a result, new designs resulted in 1¢ John Smith, 2¢ Founding of Jamestown, and a 5¢ Pocahontas.

Clair Aubrey Huston, Bureau of Engraving and Printing artist, designed the 1¢ stamp with a portrait of Captain John Smith inspired by an engraving by Crispin Van de Passe the younger. In addition, the design includes medallions in the upper corners of Pocahontas and her father, Chief Powhatan.

The 2¢ stamp, designed by Marcus W. Baldwin, depicts the landing at Jamestown in 1607 flanked by a tobacco plant and stalk of Indian corn. One colonist, with a sword in one hand and a flag in the other, leads the men in rowboats as they disembark. The fleet lies at anchor behind them and includes the Susan Constant, the Godspeed, and the Discovery.

The 5¢ stamp, designed by Clair Aubrey Huston, features Pocahontas in an oval frame and is based on a 1616 engraving by Simon Van de Passe ( National Portrait Gallery, Smithsonian Institution collection). According to legend, Pocahontas saved John Smith's life after the Powhatan people had taken him prisoner. Following a Christian baptism, she married John Rolfe, who took her to England in 1616. There she enchanted her husband's countrymen and came to symbolize the New World's exoticism.

The three engraved stamps were printed from plates of two hundred subjects in four panes of fifty each. The first day of issue for the two lower values coincided with the first day of the exposition, April 26, and the 5¢ first day followed less than two weeks later. The Norfolk, Virginia, post office opened a branch office on site, called "Exposition Station." It used a special cancel until the closing of the fair on November 30, 1907. The Bureau of Engraving and Printing printed the small die proof illustrated as the object of the month for display at a subsequent fair, the 1915 Panama Pacific International Exposition in San Francisco.

2007 marks the 400th anniversary of the founding of Jamestown and the 100th anniversary of the Jamestown Tercentennial Exposition and its postage stamp issue. Today at the historic Jamestown site, visitors can explore archaeological excavations, view artifacts in the museum, and learn about recent discoveries uncovered by forensic research. The United States Postal Service will celebrate the 400th anniversary of America's first permanent English settlement with the issuance of the commemorative Settlement of Jamestown souvenir stamp sheet in Jamestown on May 5. The stamp is in the shape of a triangle, as was the fort raised by the Jamestown settlers shortly after their 1607 arrival, and features a painting of the three ships that carried the first settlers to Jamestown.

James Horn, A Land as God Made It: Jamestown and the Birth of America (New York: Basic, 2005)