As early as 1905, prominent New Yorkers began planning a 1909 celebration of the anniversaries of Henry Hudson’s navigation up the Hudson River in 1609 and Robert Fulton’s New York-to-Albany steamboat service in 1807.

The event was of particular importance to New York City. The city’s last major exposition had been held in 1853, and the intervening years witnessed exponential growth. The Brooklyn Bridge connected Manhattan and Brooklyn in 1883. Manhattan, the Bronx, Brooklyn, Queens, and Staten Island were consolidated into a single municipal government in 1898. The subway system opened in 1904. An ambitious city was eager to show itself off on the national stage, and in 1906 a joint city-state commission was placed in charge of the Hudson–Fulton Celebration.

Twice the Commission petitioned the U.S. Post Office Department (USPOD) for a commemorative stamp to mark the Hudson-Fulton anniversaries, and the request was refused both times. Then, in August 1909, every member of New York’s congressional delegation wrote to Postmaster General Frank H. Hitchcock to support the stamp. The timing suggests that the celebration’s commissioners took advantage of the August recess—during which congressmen flee Washington’s heat and mosquitoes to spend time in their constituency—to lobby them at home.

The campaign was successful. The USPOD relented and placed an order with the Bureau of Engraving and Printing for a stamp to be issued on September 25, the Hudson–Fulton Celebration’s opening day. The Commission was asked to supply design source material: specifically, images of Henry Hudson’s ship Half Moon, Robert Fulton’s steamer Clermont, and the Hudson River Palisades.

The National Postal Museum Library now owns these source photographs, acquired in the 1970s with the transfer to the Smithsonian of the Third Assistant Postmaster General’s papers. The photograph of the Clermont is especially interesting; it shows an unfinished replica of the famous vessel under construction at the Staten Island Shipbuilding Company in Mariner’s Harbor. The single stack, wheels, and sails have been drawn in with a pencil and “irrelevant objects” have been scratched out of the background, presumably to ensure they did not show up on the stamp. The Half Moon in the photograph is also a replica, built in the Netherlands and brought to New York aboard the Holland-America Line freighter Soestdijk on July 22, 1909.

Demand for the finished stamps was naturally heaviest in New York. Commercial mailers seized the opportunity to use oversized, attractive stamps to draw attention to their mailings. A stationery firm in Rochester inquired after 10,000 copies “for advertising purposes.” The postmaster at New York City reported that another company wanted 25,000 of the stamps, while the postmaster at Brooklyn complained that he had received less than half of his initial requisition of 1,000,000 stamps and was in danger of being sold out (left). On the third day of sale, September 28, the New York post office requested 3,000,000 additional copies. In addition to the initial delivery of 50 million Hudson–Fulton stamps, a second printing of 20 million copies was ordered on October 2 and a third printing of 1.8 million on October 23. 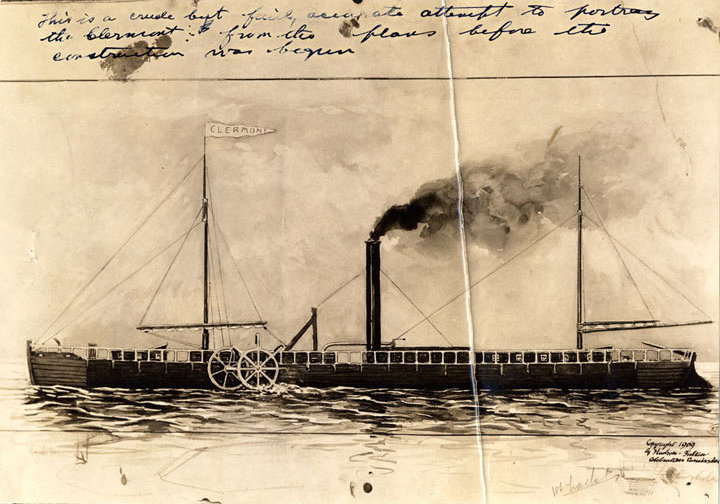 Photograph of the Clermont replica used in designing the Hudson-Fulton stamp shows an artist’s conception before construction began. 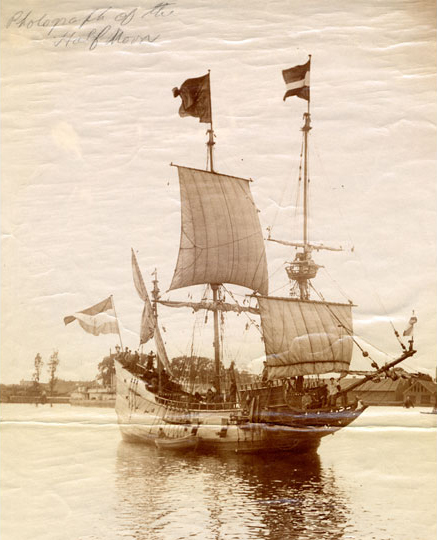 Henry Hudson’s Half Moon is seen at New York Harbor in a source photograph supplied by the Commission. This replica was constructed in The Netherlands and delivered to New York aboard the Holland-America Line freighter Soestdijk on July 22, 1909. Smithsonian National Postal Museum Library. 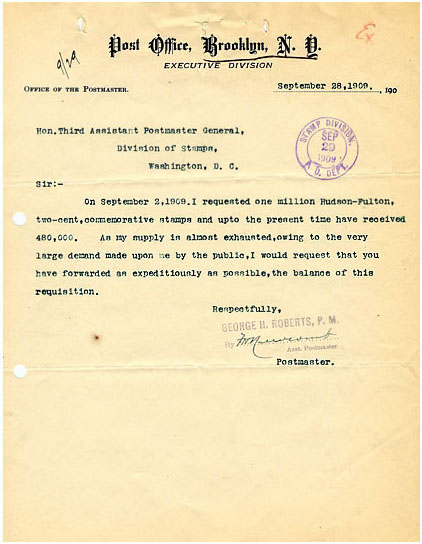 In this September 28, 1909 letter, only three days after the stamp’s issuance, the postmaster at Brooklyn asks for a second half-million copies “owing to the very large demand made upon me by the public.” Smithsonian National Postal Museum Library.