This letter was posted on June 13, 1775 from Joseph Warren to the Lieutenant Governor of Rhode Island. Warren was a physician who, after graduating from Harvard in 1759 and studying medicine, became interested in politics. He was a member of the Boston committee that prepared a report on the Boston Massacre in 1770. He was eventually appointed to Boston’s Committee of Correspondence, one of several such committees formed throughout the thirteen colonies. These committees became shadow governments, responsible for intercolonial communications, rallying citizens against British action, and uniting them for the first time politically. In Massachusetts, after the Battle of Lexington and Concord, the committees were superseded by the Massachusetts Provincial Congress, which controlled most of the countryside outside of Boston. While gaining an officer’s commission on June 14, Warren was eager for more direct military action than his rank (Major general) would normally allow. He volunteered as a private at Breed’s Hill and was killed by a musket ball to the head on June 17, 1775, only four days after this letter was written. 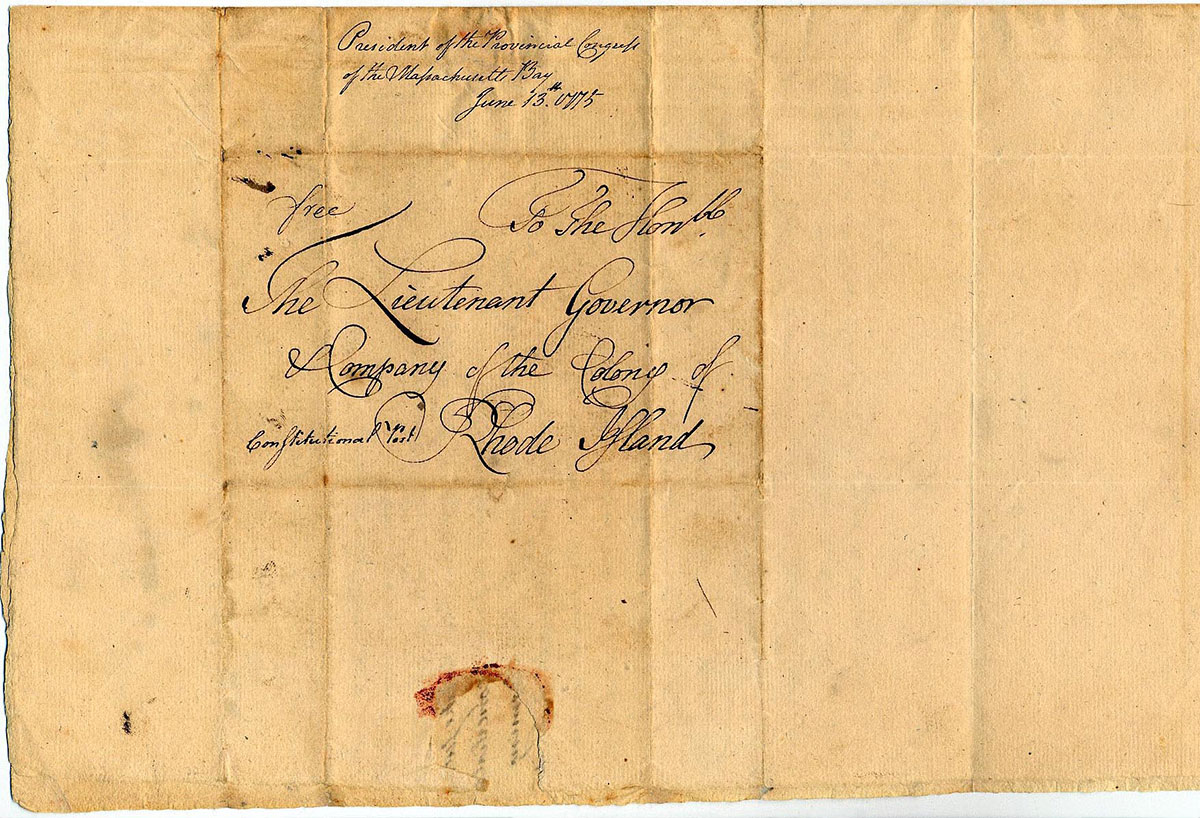 June 13, 1775 from Joseph Warren to the Lieutenant Governor of Rhode Island, back

Warren sent his letter via the newly formed Massachusetts Provisional Post. The use of the term “Circular” indicates it was one of several sent to officials in other colonies. Prior to this, a Rhode Island printer named William Goddard had traveled through the colonies advocating the establishment of a postal system that would operate independently of the one controlled by the British. Several of the colonies took his advice and did so. On May 12, 1775, in Watertown, Massachusetts, the Provincial Congress established such a post, with the general post office at Cambridge. Other colonies followed suit, with Providence and Newport, Rhode Island doing so on May 30 and 31 respectively.

This letter indicated that Canadians were becoming concerned about military preparations being made in some of the Colonies, because of which they might join with the Six Nations (of the Iroquois), who were being stirred up by the British against the American patriots, and act on a hostile manner against the Americans. Specifically, Colonel Guy Johnson, a loyalist under orders from General Gage, recruited Iroquois warriors to join General Carleton in Canada for an attack on New England.

President of the Provincial Congress of the Massachusetts Bay June 13, 1775.

To the Honble, the Lieutenant Governor and Company of the Colony of Rhode Island
Circular

Considering the exposed state of the Frontiers of some of the Colonies, the Danger that the inhabitants of Canada may possibly have disagreeable apprehensions from the military Preparations making in several of the other Colonies, and the Rumours that there are some appearances of their getting themselves in readiness to act in a hostile way. This Congress have made Application to the Honble Continental Congress desiring them to take such measures as to them shall appear proper to quiet & conciliate the minds it the Canadians, and to prevent such alarming apprehensions. We also have had the most disagreeable accounts of methods taken to fill the minds of the Indian tribes adjacent to these colonies, with sentiments very injurious to us, particularly we have been informed that Coll. Guy Johnson has taken great Pains with the Six Nations in order to bring them into a Belief that it is designed by the Colonies to fall upon them and cut them off. We have therefore desired the Honble Continental Congress that they would with all convenient speed use their influence in guarding against the evil intended by this malevolent misrepresentation. And we desire you to join with us in such application.