Judging the 2007 Federal Duck Stamp Contest on the 75th Anniversary

When Pat Fisher, director of the U.S. Fish and Wildlife Service’s Federal Duck Stamp Program, phoned and invited me to be a judge in the 2007 annual duck stamp contest, I could not have been more thrilled. I was aware the Duck Stamp Program and the beautiful stamps but I knew little of the process and benefits for preserving wetlands habitat. Duck Stamps have raised more than $700 million, used to acquire and protect more than 5.2 million acres. Now I am a supporter of this great program.

I am a Smithsonian curator of philately, a graduate of the School of the Art Institute of Chicago, a stamp collector, and a nature enthusiast. The other four judges and the alternate had a variety of significant talents: painting, nature photography, bird carving, hunting and fishing, publishing, conservation, and Fish and Wildlife administration. If one entry could capture the imaginations of all of us, it would be the winner!

Each fall the U.S. Fish and Wildlife Service hosts the Federal Duck Stamp Contest at different locations throughout the United States to select artwork that will provide the design for the next year’s stamp. Hundreds of entries are put on public view for the only federally-sponsored art competition mandated by Congress. The artwork chosen at the 2007 contest would appear on the 2008-2009 Federal Duck Stamp, issued in the summer of 2008 for the 75th anniversary of the program.

The contest took place at Sanibel, Florida, near the J.N. “Ding” Darling National Wildlife Refuge. Darling, a professional newspaper cartoonist and conservationist, had a home and studio on the Captiva shoreline. His activism to thwart development and save land as a migratory bird refuge was instrumental to the preserved environment there today. Holding the competition in Sanibel was a tribute to honor Darling on the 75th anniversary of the first duck stamp, which he had designed. 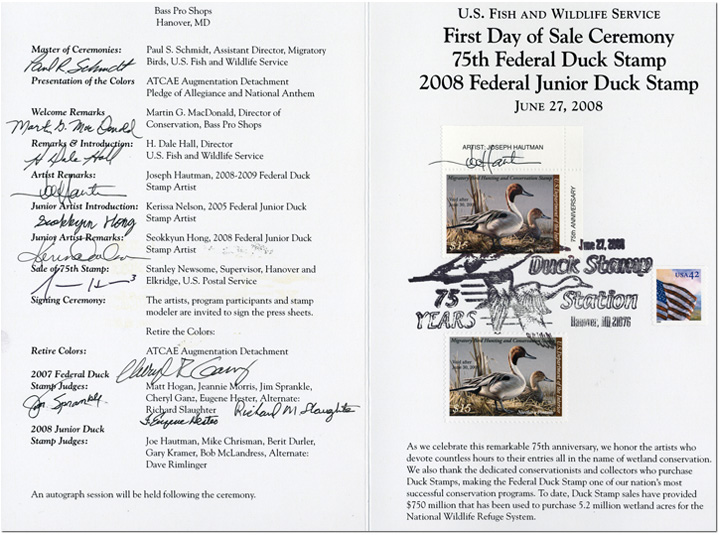 I did some homework in advance on the species in competition and also studied previously-issued duck stamps. After arrival, the judges were briefed and privately viewed the artwork before the public could view the entries. Naturalists were available to answer technical questions about habitat, scale, anatomical elements, bird posture, feather position, and color. It was important to imagine the artwork reduced in size for a stamp format and we viewed the paintings with special reducing glasses for that purpose.

During the judging, the public watched the judges display cards with their decisions of “in” or “out” as each entry was exhibited, however, the judges could not see how each other voted. After round I, the field of more than two hundred entries was reduced to about fifty. The next round when judges rated the paintings on a scale of one to five reduced it even further. The finalists were all worthy of top recognition. Making a final decision would be tough! 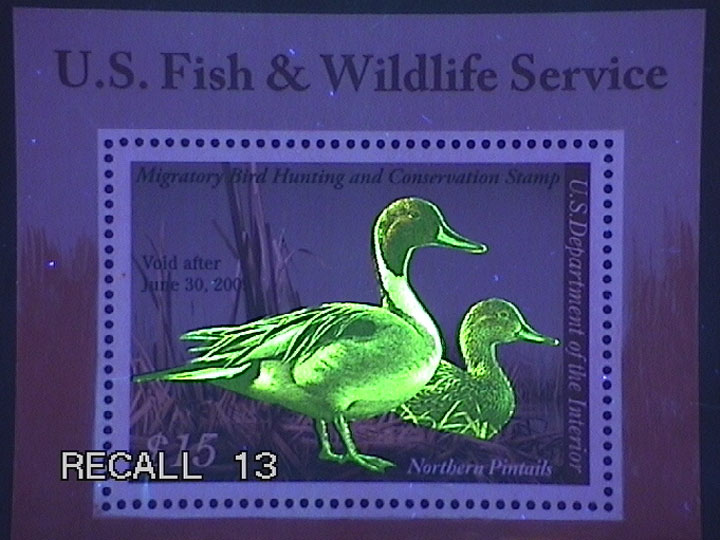 Phosphor tagging on the ducks can be seen under ultraviolet light.

After the final round, the judges sat waiting for a decision. The audience was restless, and no wonder. Everyone could see the artwork projected on a large screen and figure the tabulation. There was a tie for first place! The judges had to revote, and hopefully a winner would emerge. We voted again and expected to wait for the results. But instead, as soon as we held up our voting numbers for the last painting we saw, the crowd cheered, stood and turned to the upper corner of the auditorium, and burst into applause. A man stood and was recognized. Many in the room, full of wildlife artists and Duck Stamp enthusiasts, knew the winning artist. After all, he was a previous winner and so were his brothers. The judges were still clueless who won. Finally, Dirk Kempthorne, secretary of the interior, said that he was to announce the winner by phoning the artist from his cell phone. Kempthorne looked up at winner Joseph Haupman and asked if he had a cell phone with him. Haupman answered no and Kempthorne invited him on the stage. The moment was exhilarating and memorable for all in attendance as Haupman was congratulated for his exceptional Northern Pintails painting.

On June 27, 2008, at the Bass Pro Shop in Hanover, Maryland, the U.S. Fish and Wildlife Service held a first day of issue for the 75th Federal Duck Stamp in combination with the 2008 Federal Junior Duck Stamp (designed by a youth artist). The stamp was available self-adhesive or water-activated and on a 75th anniversary souvenir pane. By mail order, the Service offered a pane of one with the artist’s signature. The artists, judges, and officials were invited to attend and sign the first sheets off the press. Collectors bought stamps and had their programs autographed.

Who purchases Duck Stamps? Waterfowl hunters buy them to apply to their hunting licences, but anyone who buys one receives free admission to National Wildlife Refuges that charge an entry fee. Stamp collectors purchase them to add to their collections and admire the beauty of the artwork. Conservationists and nature enthusiasts buy them to support wetlands preservation and hunting, fishing, bird watching, and other wildlife-dependent recreation. Ninety-eight cents of every dollar generated goes to purchase or lease wetland habitat for the National Wildlife Refuge System. Join the fun and collect Duck Stamps!

Duck Stamps
Back to Top