The Post Office Department honored Juliette Gordon Low, founder of the Girl Scouts of America, with a commemorative stamp in 1948. This die proof of the stamp is part of the Postmaster General's Collection, and has never before been seen by the public. On long-term loan from the U.S. Postal Service to the National Postal Museum, the Postmaster General’s Collection is famous for its extensive holding of U.S. die proofs, impressions made from the dies on which stamp designs are engraved. Die proofs are used to ascertain the look of the final stamp, and are traditionally approved by the postmaster general before the stamp is produced. There are no known die proofs of this stamp in private hands, making this example extremely rare.

Juliette Gordon was born in Savannah, Georgia, on October 31, 1860. Educated at some of the most prominent women's boarding schools in the country, she married William Mackay Low at the age of twenty-six and moved to London, England. In 1911, after her husband’s death, Low became inspired by the work being done by the British founder of the scouting movement, Robert Baden-Powell. She returned to the United States the following year, and, "no longer young, not especially rich, in ill health and with the added handicap of being stone deaf, she started the movement which has had such a tremendous influence on the lives of American women."¹

Low organized the first American Girl Scout troop on March 12, 1912, in her hometown of Savannah. There were eighteen girls in this initial troop, which originally called itself a Girl Guide troop in tribute to Baden-Powell's organization of the same name in Britain. In 1913 the name was changed to the Girl Scouts of America. Thirty-five years later, when this stamp was issued, there were more than 1.2 million Girl Scouts in the United States. According to the Girl Scouts of the USA Annual Report2, by 2010 that number had reached 3.2 million.

After Low’s death in 1927, and as more and more girls became involved with the scouting movement, Girl Scout officials began to push for a commemorative stamp. Advocates wrote to the Post Office Department to inquire about the possibility as early as 1937 (the 25th anniversary of the Girl Scouts), but they were consistently told that it was not the custom of the POD to create commemorative stamps for civic or religious institutions. Regina McGranery, a member of the Executive Committee of the National Board of Directors of the Girl Scouts of America, spearheaded a push in late 1947 to get the stamp approved. She encouraged members of Congress, including Senator Richard B. Russell of Low’s home state of Georgia, to write to the postmaster general in favor of the stamp’s approval.

When that method proved unsuccessful, a joint resolution to have the stamp made was introduced in Congress in May 1948. It was approved by both houses, and went to President Harry Truman for signature or veto. Since Mrs. Truman had been serving as honorary president of the Girl Scouts for three years by this time, Truman was doubtless influenced to sign the bill, and the Post Office Department agreed to go forward with the stamp.

Several images, donated by the family, were sent by the Girl Scout News Bureau to the Post Office Department for design consideration—Juliette Gordon Low as a young girl, several studio portraits, and several photographs showing her wearing a Girl Scout uniform and insignia. The Girl Scouts naturally preferred the images in which Low was wearing Girl Scout regalia, but the family disliked the way Low looked in the formal Girl Scout hat.

In the end, the Post Office Department compromised by using an early image that showed Low in uniform but without the hat. This choice also had the effect of depicting her right around the time when she became interested in scouting. Several die proofs were created for consideration, and the final design, which also included the trefoil insignia of the Girl Scouts, was approved on October 11, 1948, by Acting Postmaster General Joseph Lawler.

The Post Office Department suggested November 15 as a date of issue for the stamp. Gertrude Simpson, director of the Girl Scout News Bureau, countered by asking Postmaster General Jesse Donaldson if the first day of issue could be made as close as possible to October 31, Juliette Gordon Low's birthday. Simpson went on to suggest that, since October 31 was a Sunday in 1948, the first day sale in the first day city, Savannah, GA, could be held on October 29, with the stamps going on sale October 30 throughout the nation. This would be, she said, "a most fortunate arrangement from the standpoint of our membership, most of whom are school children. Saturday gives them the time and freedom to go to their local post offices to buy first stamps."3

October 29 was agreed upon, and a special commemorative album was presented at the Savannah first day ceremony to Mrs. Samuel C. Lawrence, niece of Juliette Gordon Low and the first registered Girl Scout in the United States. Girl Scouts in New York City also held a first day celebration, during which three Girl Scouts, each representing a different age of scouting, were introduced to honored attendees President and Mrs. Truman.

Following the release of the Juliette Gordon Low stamp, the Post Office Department revised its policy and affirmed that scouting deserved recognition through commemorative stamps. Two years later, in 1950, a Boy Scout stamp was issued, and thereafter both the Boy and Girl Scouts received commemorative stamps on their 50th and 75th anniversaries. A scouting stamp series was begun with Scouting in 2010, the 100th anniversary of the Boy Scouts of America. On June 9, 2012, a “sister” stamp, Celebrate Scouting, will be issued, in honor of the 100th anniversary of Juliette Gordon Low’s Girl Scouts.

Laurence, Daisy Gordon and Gladys Denny Shultz. Lady from Savannah:  The Life of Juliette Low. (Girl Scouts of the United States of America, 1988.) 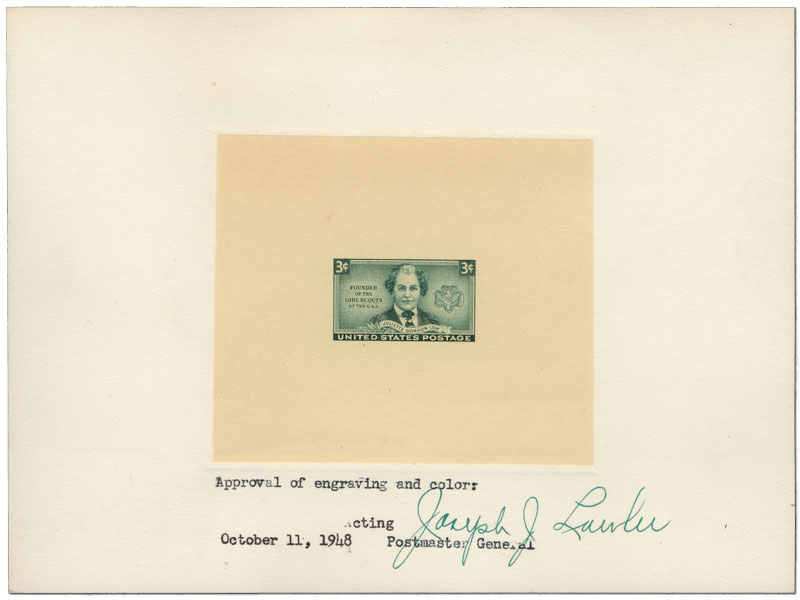 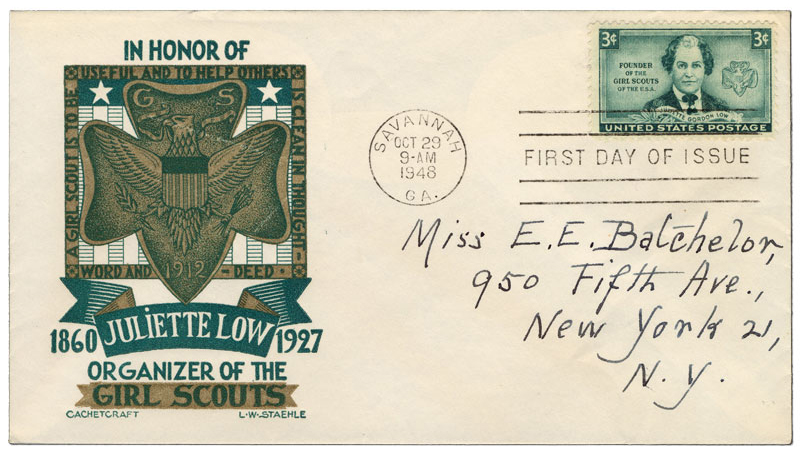 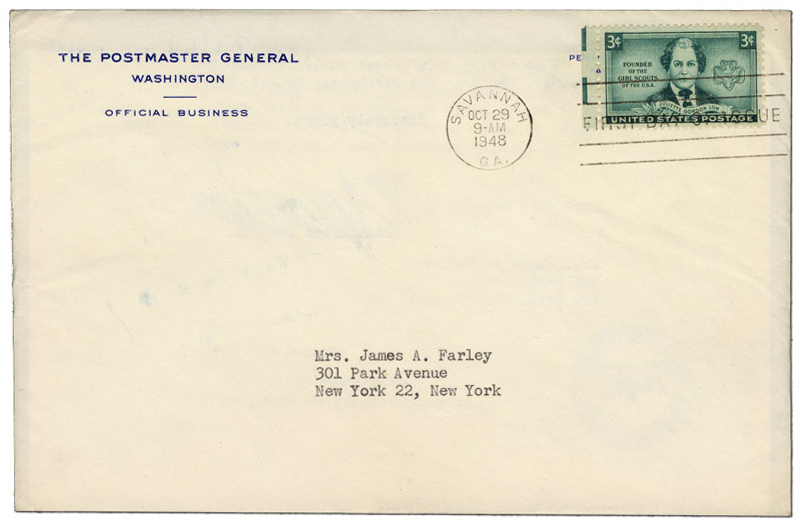