Communications between citizens of New Orleans and their friends and family in the Confederate States were forbidden by the occupying Union. In July 1862, the United States Congress passed “The Confiscation Act,” a law that provided for the confiscation of property of various classes of rebels holding civil or military offices under the Confederate government. A clause in the act gave the authorities the right to seize the property of all those who “aiding, countenancing or abetting the Rebellion should not return their allegiance in 60 days.”¹ 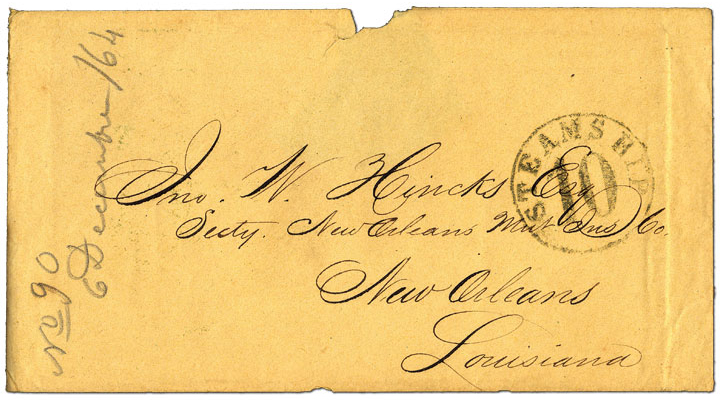 In the early part of May 1863, General Nathaniel P. Banks ordered the death penalty for persons convicted of supplying arms to the enemy and the deportation by May 15th to Confederate held territory. This deportation date was later extended to May 31st for all registered enemies who refused to take the oath of allegiance of the United States.² Approximately 700 families from New Orleans headed to Mobile with little but the clothes on their backs.

Prominent citizens of Mobile organized the Relief Committee to supply food, medical care, shelter and transportation for these refu­gees. The Committee advertized in the Mobile Register:

“Refugees from New Orleans: Refugees arriving at Mobile are informed that a room has been provided at the office of the Mobile and Ohio Railroad opposite the Custom House where they are requested to report themselves promptly after arrival and record their names. The Special Committee [The Louisiana Relief Committee] will be in attendance each day at 10 A.M. and 3 P.M. to communicate with refugees.” 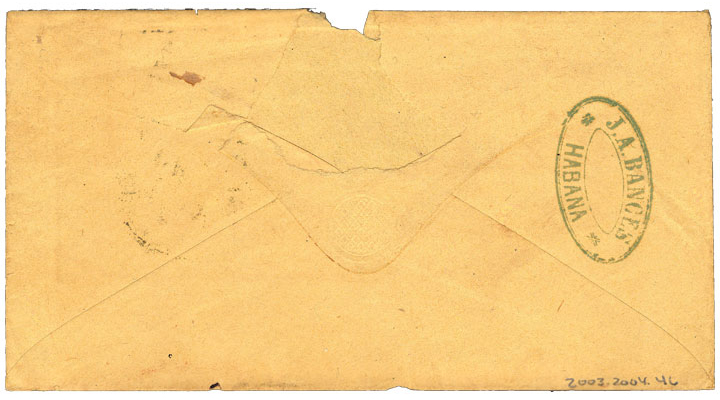 Jules C. Denis, the Confederate Provost Marshal at Mobile and head of the Mobile Camp of Instruction, censored the Confederate-bound mail until he was replaced on June 24, 1864 by Colonel Thomas H. Taylor.

Hand-carried westbound letters were not endorsed, apparently for security reasons. No postal markings were added since they were hand-carried to New Orleans addressees. 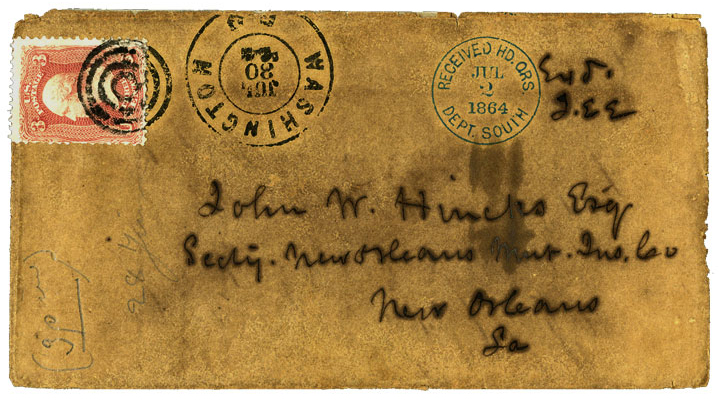 The notation, “Approved J.C. Denis Pro. Mar.,” was applied in Mobile on the envelope's back. This letter was probably carried overland to its destination by way of a traveler or possibly under separate cover. From Mobile, the letter was transmitted to New Orleans as part of the regular Flag of Truce mail, as evidenced by the notation “Headquarters Defenses New Orleans” and “Approved M.M.S.” Although undated, this probably occurred between early to mid-1864. The “Due 3” marking is for U.S. postage collected from the recipient in New Orleans.

The Smithsonian National Postal Museum has a small collection of correspondence addressed to the J.W. Hincks family of New Orleans. John W. Hincks was the Secretary of the New Orleans Mutual Insurance Company and his son, Joseph, enlisted in the Union Army May 7, 1864, and was immediately detailed to headquarters as a 1st Class clerk.5 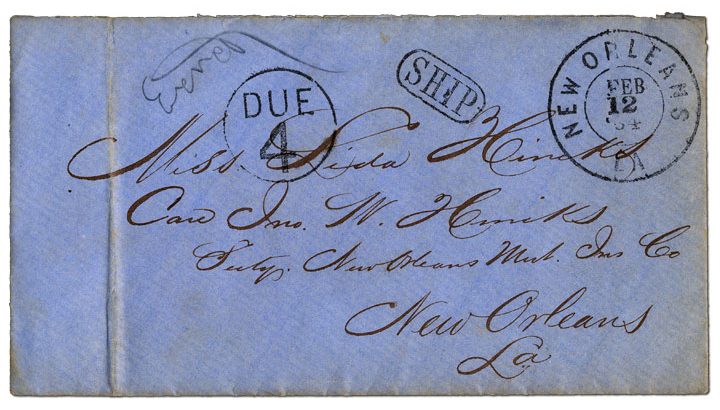 In this capacity Hincks was able to censor his own outbound Flag of Truce mail as well as take advantage of his contacts at the Federal command post at Hilton Head. One of these contacts was Captain Neville Soulé, GS General and Staff, Adjutant General, Department of Charleston who “Examined” and forwarded several of his letters from Hilton Head, S.C.

Hincks knowledge of the constantly changing military developments along the Atlantic coast allowed him to alter his mailing methods, thus ensuring a substantial number of his letters to family in New Orleans got through successfully.

The correspondence contains thirty-five covers to his father and sisters, Leda and Lucile. Several of the unique marking are the Havana forwarding agent, J.A. Bances handstamp and the Receiving Headquarters, Department of the South marking. 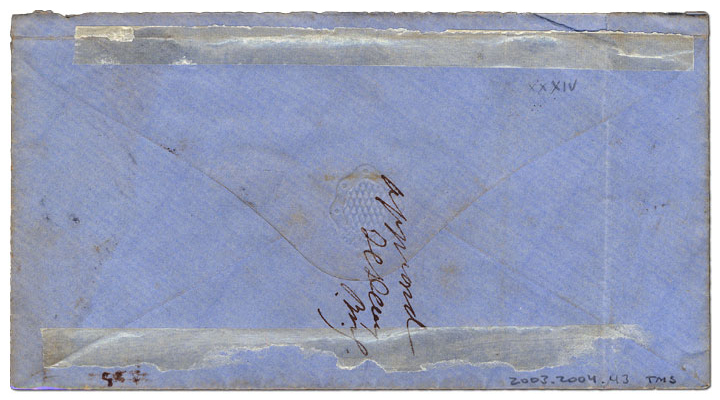 Mobile, Alabama, to New Orleans Flag of Truce mail (back)

This envelope is addressed to his sister Leda, the notation “Approved J.C. Denis Pro. Mar,” was applied on the reverse in Mobile. The letter was transmitted from Mobile to New Orleans as part of the regular Flag of Truce mail, as evidenced by the notation “Examined.” The letter entered the U.S. mail on February 12, 1864, and was rated “Due 4” for an unpaid incoming ship letter.

The block of twelve of the 2¢ brown-red Andrew Jackson (Scott CSA No. 8), described as the largest known used block, is tied by eleven strikes of an undated Mobile, Alabama double circle cancel on a wrapper, and addressed to Douglas M. Hamilton, Esq. in Woodville, Mississippi. These stamps, totaling twenty four cents, paid the rate for mailing twelve circulars and the manuscript nota­tion “12 Circulars/24 cts.”, it was transmitted “From Louisiana Relief Committee at Mobile, Ala.”6 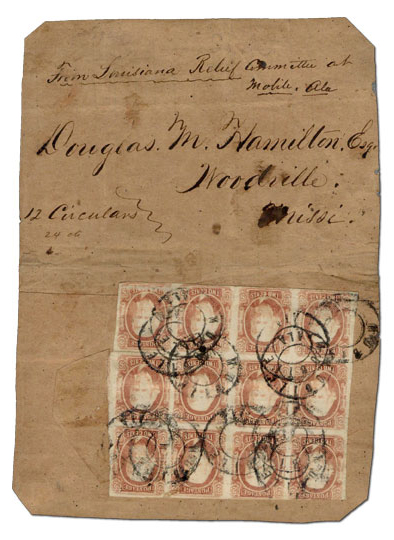 A block of 12 of the 2¢, largest known used (not part of of the Hincks Correspondence)