On March 19, 1931 the Craig, Alaska post office burnt to the ground leaving it in ruins. As evidence of the fire a US postal inspector scooped some of the remains and sent them in a jar with his report on the fire….or so it is rumored. Today, the Smithsonian’s National Postal Museum has in its collection a “Post Office in a Jar”. What happened between 1931 and today is still a bit of a mystery.

In 1911 and 1966 the Smithsonian received large transfers of postal related objects from the Post Office Department. But in between these years, several small transfers occurred that are not as well documented and the “Post Office in a Jar” supposedly was included in one of these transfers. However, it did arrive with a tag identifying it as case 11834-D item 4931 by the chief inspector, which was filed January 1, 1932, ten months after the fire took place. 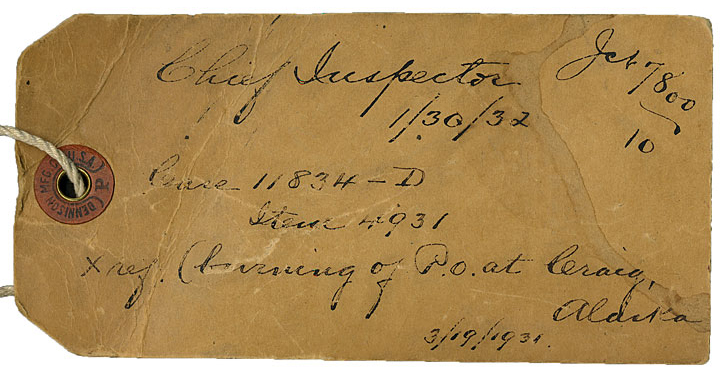 In the mid-1980s a museum staff member accidently dropped the vessel, breaking the glass and dispersing the remnants. The debris was quickly swept up and somehow contained until a decision could be made about re-housing them. The curator in charge determined that they should be placed into a new Mason jar, similar to the one that broke; therefore, keeping with its name as a “Post Office in a Jar”. Another employee supplied a replacement jar by bringing one from his home. What happened to the lid of the original Mason jar was not recorded. It is unclear whether the lid was re-used or if it was thrown away with the glass shards from the original jar.

Turning our interest to the contents of the jar, in 2009 we began searching for records about the fire at the Craig, Alaska post office. We consulted with active and retired postal inspectors, and although unfamiliar with the case, they informed us that the code D on the label signified depredation cases during this era, which could point to a scenario such as arson to cover up an embezzlement or theft. With piqued interest, the inspectors tracked down the publisher of the Ketchikan Daily News who combed the archives and located the article titled “Post office, Many Other Structures Total Loss.” The news story recounts that the fire was “discovered” at Brown’s Store. It severely damaged a number of businesses, warehouses, a residence, the jail and post office in the commercial fishing town located on an island on Alaska’s southeastern coast. The report described many of the outcomes of the destruction, including: “There are plenty of supplies in town available for all immediate needs. Postmaster Blackmar [of Ketchikan] today received a brief radio that the post office was totally destroyed with all of the records. He has wired to Seattle about the matter and hopes to send postal supplies on the Zapora, which will be the first boat leaving for Craig, so far as known at the present time.”

At the time of the news account, the cause of the conflagration had yet to be determined. These details do not confirm or rule out the interpretation proposed by the postal inspectors. What investigations ensued between the news report and when a postal inspector scooped up remnants of the post office are still unknown. Solving the mystery whether the post office was the target of a crime or just collateral damage of the fire will require more digging.

The staff at the National Postal Museum will continue to research this curious case. If you have any information regarding this object or the 1931 fire, please contact us at NPMPreservation@si.edu.