March 2007 marked the 30 year anniversary of Star Wars. To honor the event, the United States Postal Service (USPS), in collaboration with Lucasfilm Ltd., released 400 round-top mail collection boxes across the country, resembling the sturdy robot R2-D2 from the film series. The Postal Service’s goal was to have the R2-D2 collection boxes appear all on the same day. These fancifully designed mailboxes were placed to promote the first issue of the Star War stamps series. The stamps were offered for sale from  May 25, 2007 until May 25, 2008.

R2-D2 was chosen to have its likeness placed onto collection boxes because his shape is so similar to that of the mailboxes. Additionally, the little droid was selected because it “embodies the trust and dependability for which the Postal Service is renowned” according to the USPS press release announcing the mailboxes’ arrival.

People around the country were excited to see R2-D2 take the place of regular blue collection boxes.  Before long, trying to find the locations of all the R2-D2 boxes became its own cult movement. Among those who worked together online to locate all the mailboxes was a Flickr group formed to store all the pictures and discussions relating to R2-D2 collection boxes.

The R2-D2 collection boxes were not brand new mailboxes. Instead, they were fitted with vinyl “skins” that makes them take on the appearance of the spunky droid. The skin was designed by artist Chris Scalf.

In October 2007, USPS transferred a very special R2-D2 mailbox to the National Postal Museum. What makes this R2-D2 so special is that it was signed by the director of Star Wars, George Lucas, and the Postmaster General, John E. Potter. A metal plaque is adhered to the front of the collection box that has “UNITED STATES/POSTAL SERVICE” with the service’s eagle symbol on the left and “STAR WARS” in film type on right with the signatures “Postmaster General John E. Potter” and “George Lucas” and text below stating “March-June 2007/The U.S. Postal Service installed over 400 R2-D2 mailboxes in cities throughout the United States/and on U.S. Military bases around the world.” 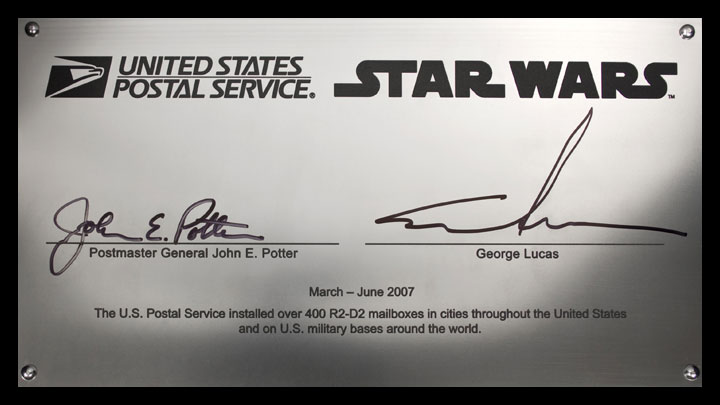 Sadly, by the time this R2-D2 arrived at the museum there were several scratches, abrasions and tears to  the skin. Museum staff made arrangements to repair the damage. USPS contractors responsible for the original project flew to Washington, DC, to replace the skin on the mailbox. They carefully removed the old skin and replaced it with a new, fresh, version. You can watch this transformation process here.

The rejuvenated R2-D2 mailbox is currently on view as a loan from the museum to the National Air and Space Museum’s Udvar-Hazy center. As all of the other R2-D2 collection mailboxes were returned to their more pedestrian, but efficient, blue tones, the Smithsonian is now the only place where the public can get a peak at the droid turned mailbox.