Railway Mail Service revolutionized the way mail was processed by sorting mail aboard moving trains. A critical component of the service was the mail exchange made between moving trains and small towns. This tricky and potentially deadly component, known as “mail on–the–fly,” allowed mail to be exchanged between Railway Post Office (RPO) cars and towns too small to rate trains stops.

These mail exchanges began in the mid 1860s. At first engineers slowed trains to a crawl so clerks could exchange the mail by hand. This inefficient system was replaced by track side cranes on which postmasters suspended mail pouches ready for pickup. The first trackside Railway Mail Service cranes were wooden, F-shaped mechanisms. They were soon replaced by a simple but more durable steel hook and crane. Standing at an average of just over ten feet in height, these iron cranes were common slights along U.S. railway lines.

As the train approached, a RPO clerk prepared the catcher arm, which would then snatch the incoming mail pouch in the blink of an eye. The iron arms of the crane would pop open, releasing the pouch to the RPO car. At the same time, the clerk kicked the outgoing pouch out of the car. The special catcher pouches used in the service had metal rings at each end to attach to mail cranes. 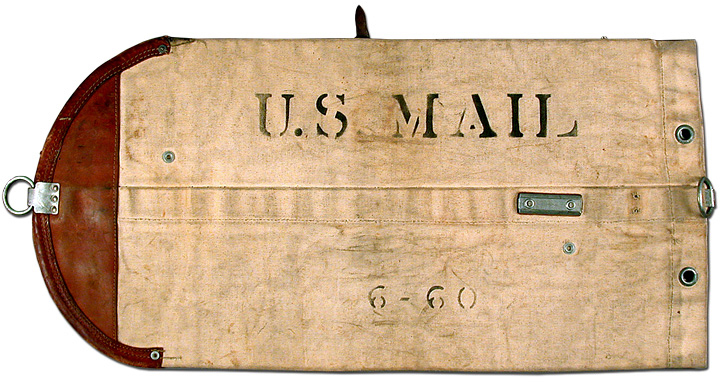 Mailbags used with the crane had to be strong enough to withstand being slammed by the train’s mail catcher without bursting open.

A successful on–the–fly exchange depended on many factors, including the clerks’ experience, strong mail pouches that would not burst open when snatched by a fast-moving iron crane or kicked off a moving train, postmasters who attached the pouches correctly and well maintained equipment that worked as expected.

Experienced clerks spoke with pride of making the switch at night with nothing but the curves and feel of the track to warn them of an upcoming catch. Not all swaps ended well. A clerk who did not pay sufficient attention to the job ran the risk of being struck and killed.

Short, silent film demonstrating how "mail on–the–fly" worked. The original film is in the collection of the Library of Congress.

Retrieving mail from the crane was only one half of the job. As many clerks learned, kicking the mail pouch out could be just as difficult. One clerk booted an outgoing pouch with so much force that he sent it flying through the railroad terminal window. The clerk who did not kick hard enough watched helplessly as the pouch was sucked under the train and mail torn to shreds by the train’s wheels. Clerks had a name for that. They called it a snowstorm.

Filmed in 1993, this is the story of the Railway Post Office clerks, as told by four ex RPO clerks, Tom Clifton, Harold Coffman, Winston Lark and Don Shenefelt.

-The engineer would give you a certain whistle that let you know that the local is coming up.

Listen for the long whistle on the train.

BOOM! Take it off, throw it to the pouchman for distribution.

-Some people may think of us as railroad employees, but that's not true because we had to take a a stiff, competitive exam that the post office put out for Railway Postal Clerks, RPO Clerks. And if we passed it, we we got the job.

-Well, the doorman had a call in at each pouch as they came in. Well he cut it short. In other words, he would say something like, "Florida dies with a two from chic seven."

-Going on further you've get, Hagers and Roanoke at Waynesboro.

-The Dot and Polka.

-Nelson County's right out of Charlottesville.

-You don't lose a whole lot of time. You just throw the name out or the address out. And everybody, as we're still working, somebody going to try to figure it out. And so this was addressed to "Mr. Hot Dog, Washington D.C." And so we were all curious, where in the world is Mr. Hot Dog? Because we broke the mail down. And so finally, before the trip was out, somebody said, "oh that's Chief Justice Frankfurter." And so we sent it in to the Chief Justice. That's what we decided it was. But somebody wrote on there, "Mr. Hot Dog."

-Most of the fellas, I'd say 99% of them, were all for one and one for all, because anybody that was stuck, if somebody else got up on his mail, he'd go and help the fellow that was stuck, because nobody sat down and rested, or laid asleep, or anything else, unless everybody was up. Nobody stopped to eat until everybody could eat. And it was just that, "I help you and you help me till we're done."

-1977. That was the last working mail train that ever the rails. It was a glorious affair full of tears and all like that. But I think if the trains were running today, I would still be on there and I'm sure some of the others, because we were very, very dedicated. We loved that job. But that was the last run, and that's a sad story.

By the 1870s, on–the–fly exchanges helped position Railway Mail Service as the backbone of the nation’s postal system where it remained into the 1930s. The service began a steady decline in the late 1940s as airline and automobile passenger traffic grew. By 1948 there were only 794 RPO lines still in operation. In 1962, the number was down to 262.  By 1971, only thirty trains were still using railway mail cranes in the United States. On May 1 of that year, AMTRAK (America, travel, and track) began operations and after just over a century of service, on–the–fly mail exchanges came to an end. 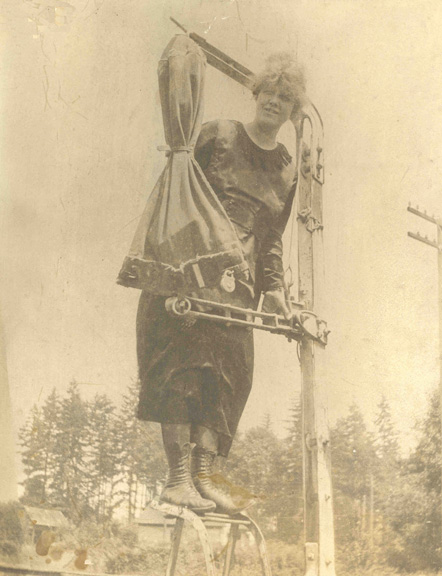 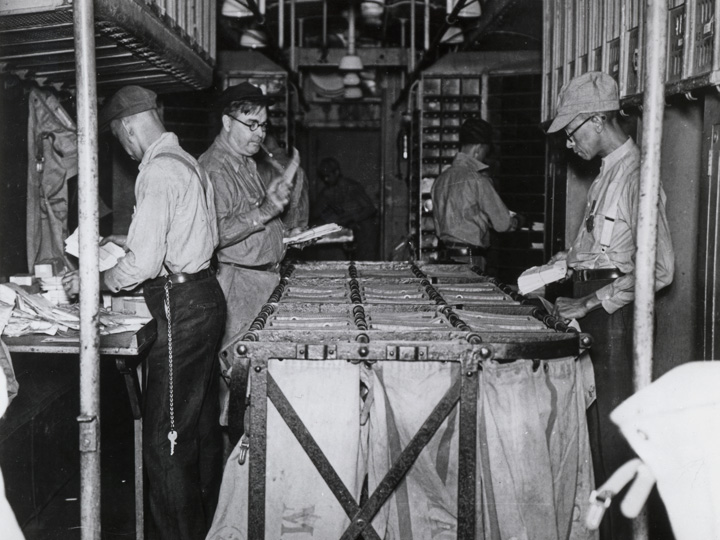 Clerks worked hard to sort and prepare mail for each stop along the way.