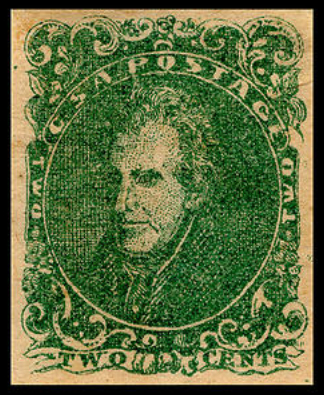 The Confederate States Post Office Department had to provide its citizens with stamps. Less than a month after his appointment, Reagan ran ads in both Southern and Northern newspapers asking for sealed proposals from printing firms desiring the account. The Department received bids from companies in Philadelphia, New York, Baltimore, and Newark, as well as New Orleans and Richmond.

After war commenced at Fort Sumter, it was evident that the contract should go to a Confederate firm. The Department settled on the modest Richmond lithographers Hoyer & Ludwig. The first Confederate issue was placed in circulation in October, five months after postal service between the North and South had been suspended. In the meantime, postmasters throughout the seceded states were directed to use temporary substitutes.

The Confederacy issued thirteen different major stamps that saw postal usage, or sixteen stamps if the different printers are taken into consideration. One stamp, the 1-cent De La Rue, was printed but never issued, and it therefore saw no postal usage. All stamps were issued imperforate (without perforations) except a few perforated stamps that were prepared experimentally.