Only three weeks after Lyman Doty was hired to fly the mail, he was flying from New York to Philadelphia in an unmodified de Havilland aircraft. The craft's Liberty engine begin to miss over Brooklyn, so Doty headed back to Belmont. While landing there, the de Havilland's faulty axle gave way and the fuselage crumpled. Trapped in the front compartment, Doty was badly hurt, but he recovered after a number of operations and three months of recovery. Doty was flying mail again by July 1919.

On October 14, 1919, Doty suffered an airmail crash that he did not survive. He was flying the same Washington – New York route when witnesses near Catonsville, Maryland, saw his airplane, flying low in a thick fog. As they watched in horror, Doty's airplane hit the top of a tree and plunged to ground where the airplane turned over and caught fire. Witnesses couldn't reach Doty in time, and he was killed in the fire. 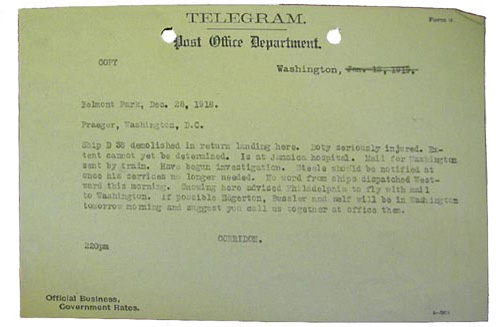 Telegram regarding Doty's airmail crash on December 28, 1918. The telegram, sent to Second Assistant Postmaster General Otto Praeger, relates that the crash is being investigated, Doty was hospitalized and the mail forwarded to its destination by train.
- Courtesy of the National Archives & Records Administration