Pilot Samuel C. Eaton is better known today for his sense of humor than his flying skills. After crashing his JN-4H "Jenny" aircraft into a tree outside of Philadelphia in the summer of 1919, he filed a report on the crash that said he had delivered the mail to a "branch" post office. 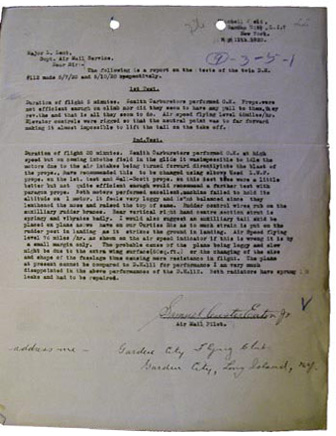 Report by Samuel Eaton on the poor operating test results of the twin de Havilland aircraft. The tests were made on May 7th and 10th in 1920.
- Courtesy of the National Archives & Records Administration