US airmail's Developmental Period began on May 15, 1918, with the onset of airmail service between Washington, Philadelphia, and New York. The period ended in 1945. The Post Office Department issued a bi-color 24-cent airmail stamp (Scott C3) for its Washington-Philadelphia-New York service. The stamp featured one of the Curtiss Jennies used on this route. The POD at first used army pilots for the service, but by August, it hired its own pilots for the route.

The POD aimed to fly mail coast-to-coast, day and night. After gradual expansion from New York to Boston and then to Chicago, and after many experimental flights across the country, on July 1, 1924, the POD established service from New York to San Francisco, flying day and night. It used a three-zone system of airmail postage — New York to Chicago, Chicago to Cheyenne (Wyoming), and Cheyenne to San Francisco — with mail charged eight cents for each zone traversed.

Beginning on February 15, 1926, private airline companies under contract with the POD flew all mail except for the government transcontinental route. Routes received CAM (Contract Air Mail) numbers. The airmail fee was ten cents for each CAM route under 1,000 miles and fifteen cents for each route between 1,000 and 1,500 miles in length.

The US Army again flew the mail for a short period in 1934 because the POD cancelled all CAM contracts and re-let the contracts as AM (Air Mail) contracts. The system grew tremendously from 1934 onwards.

The POD developed FAM (Foreign Air Mail) routes at the same time it developed domestic routes. Contracts with US carriers expedited the movement of mail between US gateways and foreign countries. The initial thrust, initiated in the late 1920s, involved Central and South America. Service across the Pacific from San Francisco began in 1935, and service from New York to Europe began in 1939. The POD contracted with Pan American for all of these early routes.

This section offers examples of letters and cards flown on many of these early routes.

Mail that records the expansion of domestic airmail service in the... 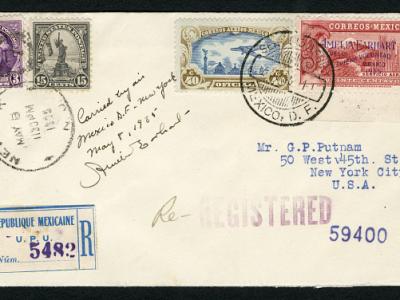 Many airmail postcards and envelopes document specialty flights that were not from...

Airmail covers are not always collected as flown mail but instead document special events such as...