Between Independence and 1792 the United States Gereral Post Office (1775-1829) changed little from its colonial forerunner. There were seventy-five post offices in 1790, most along the Atlantic seaboard post road from Maine to Georgia, the only significant exception being along the post road from Philadelphia to Pittsburgh, the western-most post office. There was no postal service in the vast territory between the Appalachian Mountains and the Mississippi River.

Two important provisions of the 1792 Post Office Act laid the foundation for the General Post Office's explosive growth in the nineteenth century: Congress took away the executive branch's authority to establish post roads and thereby control the expansion of postal service and, to insure an informed electorate, newspapers were permitted in the mail at heavily subsidized rates. By the time the French writer Alexis de Tocqueville visited America in 1831, postal service had grown to 8,686 offices. He observed that “in the forests of Michigan there is no cabin so isolated, no valley so wild but that letters and newspapers arrive at least once a week” making the American frontiersmen better-informed that many of his own countrymen living just outside Paris. The Post Office Department (named this since 1829) grew to a peak of 76,945 offices in 1901 before Rural Free Delivery (RFD) began the consolidation of smaller rural offices. Distributing mail to this growing network of post offices made transportation a significant component of the postal budget.

Progress from the eighteenth century post rider carrying a portmanteau to today’s eighteen-wheeler on the interstate highway demonstrates the post office's openness to changing technologies and the degree to which postal contracts have encouraged construction of a national transportation infrastructure. In its earliest contracts with post riders and stagecoaches, the post office specified the style of vehicle and number of horses to the used. The Post Office Act of 1845 stipulated that the Post Office Department could no longer control the mode of transportation used to deliver the mail so long as the contractor delivered the mail with “certainty, celerity, and security.” The term 'Star Route' for postal contracts not awarded to railroads or steamboats developed from the practice by contract clerks of representing these three terms with stars in their ledgers.

The first mail bags carried by rail traveled between Philadelphia to West Chester in 1832. In 1862, during the trips across northern Missouri, postal clerks working in a modified baggage car on the Hannibal & St. Joseph Railroad prepared the California mail for dispatch when the train arrived at its western terminus. From this developed the Railway Mail Service, a division of postal clerks riding in mail cars to collect, cancel, sort, and distribute mail as they moved across the country.

Between 1870 and 1920 railroads dominated cross-country mail transportation. As America became an automobile culture, the elimination of unprofitable railroad passenger routes which began in the 1920s brought cuts to the Railway Mail Service. In 1941 the first Highway Post Office (HPO)—a bus converted into a mobile post office—began serving a former RMS route between Washington and Harrisonburg, Virginia. By 1960 over four hundred HPOs traveled the nation’s growing network of paved roads. They were rapidly phased out after 1965 in favor of Sectional Sorting Centers served by trucks. The last HPO, working between Cleveland and Cincinnati, ceased operation in 1974. Railway mail was finally eliminated in 1977. Today, Star Route contractors driving eighteen-wheel tractor-trailers instead of wagons and stagecoaches have assumed a renewed importance in postal transportation.

No one called for intra-city mail services during the nation's early days. Postal customers sent and received... 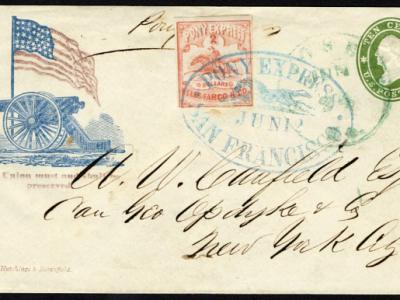 The transcontinental Pony Express operated a ten-day mail route between...

‹ Land and Sea up Intra-City Mail ›
Back to Top