With the global dispersion of people and commerce beginning in the 1600s, mail has regularly been transported outside continental boundaries by ocean-going ships. In the 1600s and 1700s, European colonial holdings in the Americas depended on the transatlantic voyages of privately-owned ships that carried mail—ship letters—along with travelers and commodities. The reliance on private ships continued until the mid-1700s in the North Atlantic, despite, for instance, attempts by the British Post Office to establish a contracted mail fleet (packet fleet). A similar scenario existed for transpacific mail, although the dependency on private ships lasted until the 1870s.

As governments sought control over the mail and the revenue it generated, they signed contracts with fleets to carry official and private mail on regular schedules between prescribed destinations. Eventually they rescinded the subsidies, replacing them with guarantees of the sea or sea and inland postage fees for the actual mail carried. Most vessels plying these routes failed financially under these constraints. 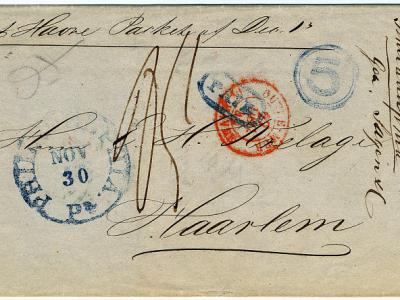 Prior to the nineteenth century, those wanting to dispatch mail from England to...

‹ Pony Express Mail up Transatlantic Mail ›
Back to Top