The Smithsonian Postal Museum houses a number of interesting tools and machines which have been used to produce postage stamps. Together they embrace all the equipment which would have been found in the stamp production rooms of the Bureau of Printing and Engraving in the 1920s.

The first step in preparing a new issue using this equipment was design development. An artist transferred his work to special, treated tracing paper, which was laid on a blank die. Several methods were used to lightly outline the design using an engraving tool. Two basic techniques were used to prepare the die. In one, called 'line (or Intaglio) engraving', the printing part of the die was cut in recess into the die in reverse and from right to left. Any portion of the die surface left uncut would not hold ink, while the recessed lines would. Borders and letters were done first, usually using a rose engine lathe and a straight line ruling machine. The central subject was engraved last to protect its delicate art work. This was executed by a master engraver using a combination of acid etching and hand-cutting. The die was then hardened and the design taken up on a softened transfer roll mounted in a transfer press.

This press forced all the design detail into relief (i.e. standing above the roller surface). The roller was then hardened and the design pressed into a softened stamp plate multiple times in rows and columns. The images were now identical to the die with the design in recess, except it now read left to right. After hardening the plate, it was mounted on a flat, movable bed. The plate was inked and then carefully wiped so that ink remained in the recesses only. Dampened paper was laid on the plate, which was then moved under a cylinder, forcing the paper down into the recesses and causing the ink to be drawn onto the surface of the paper. The sheet was then dried, gummed, and perforated. This was called 'flat plate printing'.

A more efficient press was developed in 1918 that processed a continuous web of paper between a blank cylinder and two curved line engraved plates bound together to form a cylinder. The paper passed through a wetting bath and received the design from the rotating cylindrical plate, which had been inked and wiped. It then passed through a drier, cutter, gumming machine, another drier, and finally a rotary perforator. This was referred to as 'rotary press printing'.

An alternative method of stamp production was known as 'relief' or 'surface' printing. A good analogy is the use of a simple rubber stamp. The design was in relief on the die, the material surrounding it having been removed. A master die, usually employing a combination of carving and type setting, was blocked together, and a mold was made of it. A molten soft alloy was poured into the mold and allowed to harden. After touch-up and cleaning, it in turn was used to make another mold that would withstand molten steel. Multiple castings were made, and the resulting dies were leveled and blocked together. This compound die was mounted on a flat bed press and ink was applied only to the raised portions. The United States issued some relief printed stamps, but line engraving was preferred until photogravure methods were developed.

The following sections describe in more detail each of these steps and contain images of the actual machines. 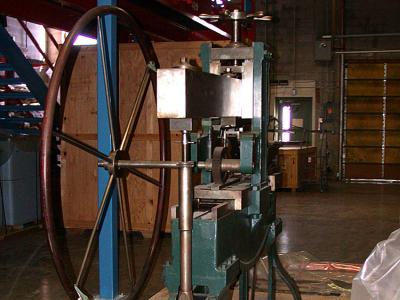 The first transfer presses sunk the image on the die directly into the... 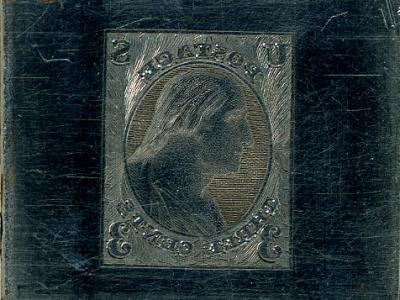 A die, a cancellor, and a transfer roll in the museum's collection.