At the end of January 1986, the explosion of the space shuttle Challenger seconds after its launch stunned the world. The crew of seven astronauts included Christa McAuliffe, the first school teacher selected by NASA to join a space mission. A few hours after the accident, President Reagan addressed the nation, saying, in part, "The crew of the space shuttle Challenger honored us by the manner in which they lived their lives. We will never forget them, nor the last time we saw them, this morning, as they prepared for their journey and waved good-bye and 'slipped the surly bonds of earth' to 'touch the face of God.'" With this phrase, Reagan referenced a sonnet titled "High Flight" by John Gillespie Magee, a WW II pilot who served with the Royal Canadian Air Force.

Later in the year, Reagan signed the Goldwater-Nichols Act, initiating one of the largest transformations and restructuring of the Department of Defense in US history. Along with his drastic alterations to the government, Reagan confronted serious issues arising from the Iran-Contra affair. In England, Prime Minister Margaret Thatcher enjoyed a less bumpy political ride than her US counterpart did as her party garnered many electoral successes. Pop culture saw the Rock and Roll Hall of Fame issue its first inductions in 1986, honoring rock legends such as James Brown, Ray Charles, and Elvis Presley. Aretha Franklin became the first woman inducted into the Hall of Fame in 1987.

In 1986,in a joint issue with Sweden, the United States issued four postage stamps commemorating the hobby of stamp collecting. Artic Explorers, Duke Ellington, and stamps celebrating the 200th anniversary of the US Constitution were among the many subjects honored on American stamps during this period. 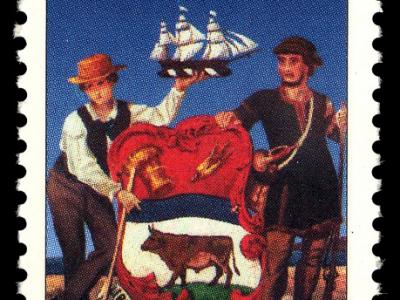 Ratification of the Constitution Bicentennial Issue

Learn more About Ratification of the Constitution Bicentennial Issue