Plans for the first Olympic Games of the twenty-first century were well underway before 2000. Sydney, Australia, hosted the competitions in the summer of 2000. This marked the second time that Australia had hosted the modern Olympic Games. The 2000 presidential election in the United States ended only after a recount of votes cast in Florida and a Supreme Court decioson. The year 2001 will be marked forever by terrorist attacks on the Pentagon and the World Trade Center Towers in New York City. The attacks claimed thousands of lives.

This period's first commemorative stamp celebrated the Chinese New Year — Year of the Dragon Issue. And in the summer of 2000, the Postal Service released one of the most innovative stamp designs ever with the Space issue souvenir sheets. These souvenir sheets included the first hologram and the first circle-shaped postage stamps issued by the United States. Also that summer, the USPS released four stamps featuring artwork created by children through a contest titled, "Stampin' The Future." Stamps also honored legendary baseball fields and included Detroit's Tiger Stadium, Boston's Fenway Park, New York's Yankee Stadium, and Philadelphia's Shibe Park. A number of definitive stamp issues were released during this period, including the first-class rate Statue of Liberty issues and the United We Stand flag issue. 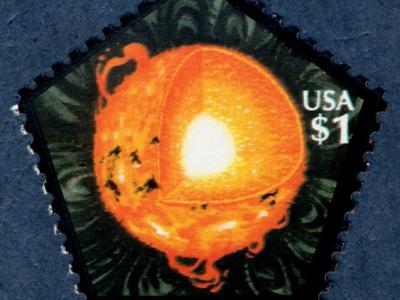