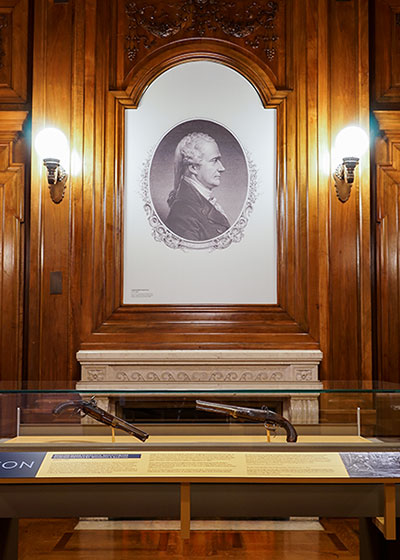 Born out of wedlock on the small British Caribbean island of Nevis in 1755, Alexander Hamilton was deserted by his father at age eleven and raised by a luckless mother who died when he was thirteen. He went to St. Croix and clerked in the office of a New York trading company, where his employers recognized his intellect and raised money to send him to America for a college education. Shortly after his arrival the long-simmering tensions between Great Britain and her North American colonies erupted into open war. Hamilton committed to the revolution; he and America would sink or swim together.

In the two hundred and fifteen years since his untimely death in a duel with the vice president at age forty-nine, Hamilton has become an American icon. Stamps, money, movies, television miniseries, and now a Broadway musical commemorate his meteoric rise and his sweeping vision for America’s future, aspects of which are still with us today.

Please note, due to Smithsonian Institution conservation and preservation protocols, the selection of objects and images on this website may differ from the items on exhibit in the museum’s Alexander Hamilton: Soldier, Secretary, Icon gallery.

‹ Dueling Pistols up
Back to Top