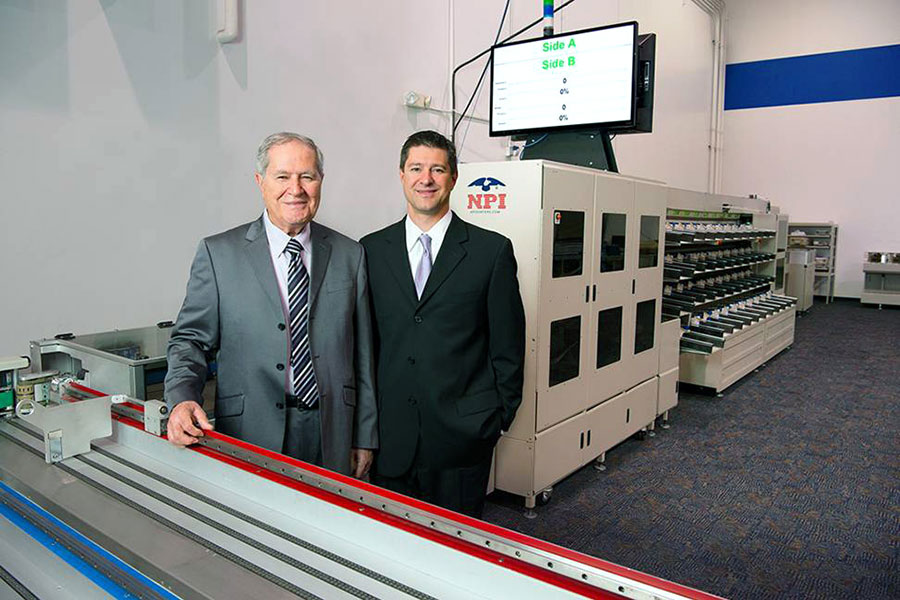 Henry Daboub founded National Presort (NPI) in 1977 and has served as CEO and president since its inception. His son Brent Daboub joined NPI after graduating from college in 1994 and today serves as the company’s COO.

Henry Daboub founded National Presort Inc. (NPI) in 1977 and has served as CEO and president since its inception. Family has been at the heart of NPI since the beginning, with Henry’s wife, Cathey, assisting him in the family kitchen before he ventured into his first manufacturing facility. Henry’s son Brent, who joined NPI after graduating from college in 1994, today serves as the company’s COO. NPI has built and deployed more than 1,000 machines with a combined sorting capacity in the hundreds of millions of pieces per day.

Q: How did you get started in the presorting business?

A: I was working as an electro-optics engineer at a company called ElectroCom, which eventually became part of Siemens. I was designing barcode readers and optical character readers for U.S. Post Office projects. In the process, I met two postal engineers who told me that the Post Office had announced a program where mailers would receive a discount for sorting their mail by ZIP code before submitting it to the Post Office. We decided to start a company to provide automated mail-sorting services to mailers and share the postal discount. In September 1977, I resigned my position at ElectroCom and incorporated NPI. We then began designing and building a high-speed letter sorting machine.

Q: Was the idea of leaving a comfortable job situation to launch your own company a little scary?

A: Yes, yes it was.  My wife Cathey and I had four young children. But she was very supportive. I wouldn't have done it had she not been so supportive.  And she helped in so many ways.  For example, when I was assembling electronic circuit boards, she picked out the different color-coated components because I am colorblind.  We assembled the circuit boards together on the kitchen table. So we were in this together from the beginning.

Q: When did you move from the kitchen to having an office?

A: It was mid-1978. It became clear to us that we could not build the machine we had designed in our garages. So we entered into an agreement with a manufacturer in Lenexa, Kansas. We gave them the right to use our design and they would build five sorters for us. We then leased a building in Tulsa, Okla and opened for business with the first of the five machines. The first generation of our sorters was called “The S4”. We chose Tulsa because there were several oil companies there that were producing a large volume of mail. Unfortunately, the Kansas-based company did not build our first machine strictly to our design and it didn’t work very well. We had to work all day to sort the mail, and most of the night to modify the machine. Eventually, the problems were corrected and the vendor acquired by Bell & Howell, which completed the fabrication of our S4s.

Q: Later, you opened a Dallas headquarters and presort bureaus across the country. Can you describe that progression?

A: After we had Tulsa running smoothly, we began finding mailers in the Dallas area that could provide quite a bit of volume, so we decided to open an office and begin building sorters here. We found a credit card company in Dallas, for example, that was producing 80,000 pieces of mail a day. Back then, that was a huge number. By this point we had created a more advanced version of our design and were building our own machines. We expanded to other cities as well. We began looking around and saying, "Well, who else produces a lot of mail?" Then we would find there's an opportunity in Omaha, one in Wilmington, Del., one in San Antonio, Atlanta, Philadelphia, and we started opening presort bureaus around the country. We started doing quite a bit of work with banks.

Q: How has the presorting business changed over the years?

A: In a lot of ways. Initially, it was all about ZIP codes. All the Post Office cared about was that the mailers put the mail in ZIP code order, separated the different ZIPs, and then brought the mail to the post office. On the dock, they would check for accuracy. And that’s the way it was for many years. But things really began to change in the late 1980s. That’s when Postmaster General Anthony Frank established a special task force to look into additional ways the private sector could support the postal system. It was called the Joint Industry/Postal Service Worksharing Project. I was fortunate to be one of the 12 industry leaders that were part of this group, and it led to a number of important innovations for presort mailers.

Q: What were some of the achievements of the Joint Industry/Postal Service Worksharing task force?

A: Based on our recommendations, presort mailers were given the opportunity to offer value-added services and receive discounts and rebates in return. This resulted in manufacturers developing sorters with more capabilities so that their customers would do a larger share of the work of the Post Office. We modified our machines to incorporate optical character readers to read the ZIP codes and used an inkjet printer to spray the barcode on the mail. By then the ZIP+4 codes had been introduced, which meant more ZIP code information being converted to barcode. 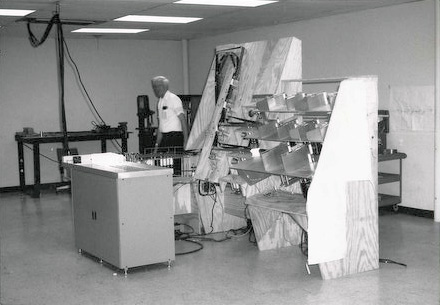 To earn the U.S. Postal Service’s business, NPI — then a 25-person company — built a proof of concept using plywood and metal as part of its RFP response for the Delivery Bar Code Sorter, or DBCS. NPI’s winning design beat out the proposals of large competitors from around the world.

A: That was a big one for us. The Post Office issued a request for proposal for a compact machine, preferably four levels high with hundreds of outputs; it eventually became known as the Delivery Bar Code Sorter, or DBCS. I was very surprised that our little company of 25 employees was invited to participate. We put our heads together and built a proof of concept using plywood and metal and tested it in our shop, and submitted a response to the request for  proposal to go with it.  We were selected along with three other companies to build a prototype and enter them into a competition. As a result of winning the competition our design was selected for the production of 614 machines. NPI licensed Martin Marietta to manufacture the machines based on this design. We beat out some very large Japanese and German companies in the competition.

Q: How did that deal with the U.S. Postal Service contribute to NPI’s growth?

A: It gave us funding to expand, because we got royalties on the machines that Martin Marietta was selling to the Post Office. That allowed us to go after other opportunities. The Royal Mail in Britain saw our design and decided they wanted a version of the same machine. That was an additional 280 machines. Then Australia Post saw the Royal Mail machines, and they asked us to create a modified version for them, and they bought 58 machines. That led to working with postal services from Thailand to Brazil. 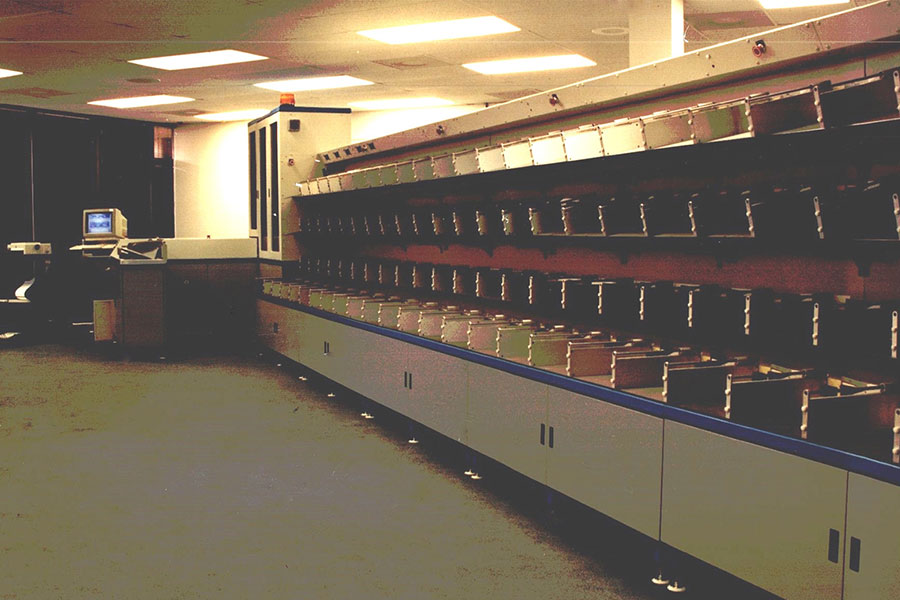 In 1991, the U.S. Postal Service became an NPI customer after NPI won the competition to design the Delivery Bar Code Sorter, or DBCS. This is a prototype of the DBCS.p

Q: In recent years, the presorting business has moved from a focus on letter-sorting to an increasing capacity for parcel-sorting. What has been driving this change?

A: In our case, we were providing flat-sorting machines for one of the major overnight shipping services that had a facility in Dallas. As we spent more time at their facilities, we realized that they were manually sorting these parcels and the volume of parcels was increasing dramatically. My son Brent, at the time our vice president of engineering, decided that we needed to develop an automated parcel sorter. He looked at the existing parcel-sorting technologies and found that they were slow, consumed a large amount of floor space and were extremely expensive. Brent set out to develop a high-speed, compact and affordable solution, resulting in development of the Xstream. We see a great future in parcel sorting.

Q: As you look back on your partnership with the U.S. Postal Service over the years, what highlights stand out for you?

A: I formed a personal relationship with Post Office and industry leadership during my year on the worksharing task force, and that’s a great memory for me. From a business standpoint, the results of that task force were a new world of opportunities for presort mailers.  I had always felt that we were barely scratching the service of how our technology could help the Post Office, and by working together we created a win-win for everyone – the Post Office, presort mailers, and postal customers.

‹ Manhattan Associates up Neopost USA ›
Back to Top