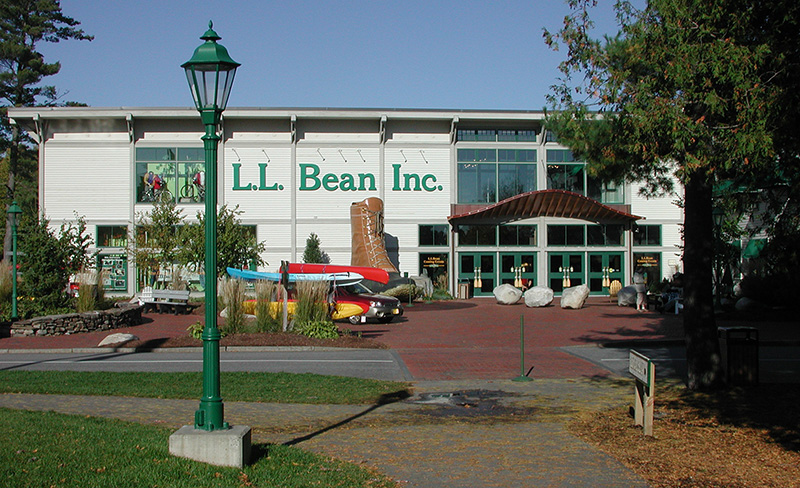 We are honored to take part in the Smithsonian’s National Postal Museum virtual exhibition exhibit telling the incredible story of the historic partnership between the U.S. Postal Service and America’s mailing industry.

L.L.Bean’s relationship with the Postal Service is a long and illustrious one, beginning over 103 years ago. In 1911, our founder Leon Leonwood Bean returned from a hunting trip near Freeport, Maine with cold, wet feet. Outdoor boots in those days tended to be heavy, clunky and made of thick leather and when they got wet, they stayed wet, and when your feet get wet, they get cold.

L.L. had a revolutionary idea to sew rubber bottoms, which would keep hunter’s feet dry, to a leather top, which was comfortable, yet rugged, able to withstand traipsing through the rough woods and waters of Maine and beyond. L.L. really felt he was onto something, so he decided he would try to sell them, calling them the Maine Hunting Shoe. He acquired a list from the State of Maine of out-of-state hunting license holders and mailed them a flyer guaranteeing them to be the best boots for all-around hunting purposes and thus began L.L.Bean’s relationship with the Postal Service.

L.L. received 100 orders for the new boots, but 90 of those first hundred failed. True to his word, he refunded everyone’s money, corrected the problem, mailed out more flyers and began what would become one of America’s most beloved family-owned and operated direct marketing businesses.

The Postal Service played an integral role in L.L.’s initial success. In fact, the very first parcel post mailings out of Freeport were for the Maine Hunting Shoe and over the years, the mail service would become even more important to the growth of L.L.Bean. 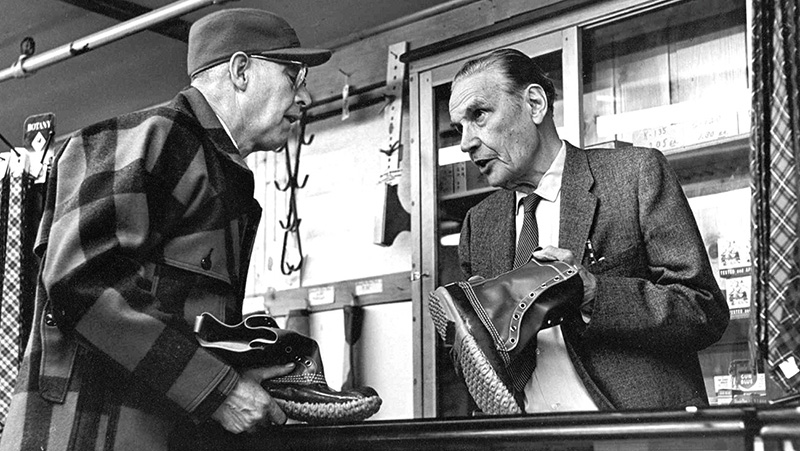 Building on the success of the Maine Hunting Shoe, L.L. greatly expanded the product line, offering everything from trout knives and duck hunting parkas, to fly rods and more. He increased catalog circulation and the timing couldn’t have been better. In 1912, Congress established domestic postal service, which would revolutionize the mail-order industry in the U.S. This law was enacted in 1913.

By 1919, L.L. was mailing over one thousand catalogs and by 1920 that number exploded to over 35,000. Conveniently, the Freeport post office was located directly under L.L.’s store. Whenever L.L.Bean received an order, the item would be boxed up and ingeniously sent down a chute to the post office below which meant the order would be processed and sent out that very same day. 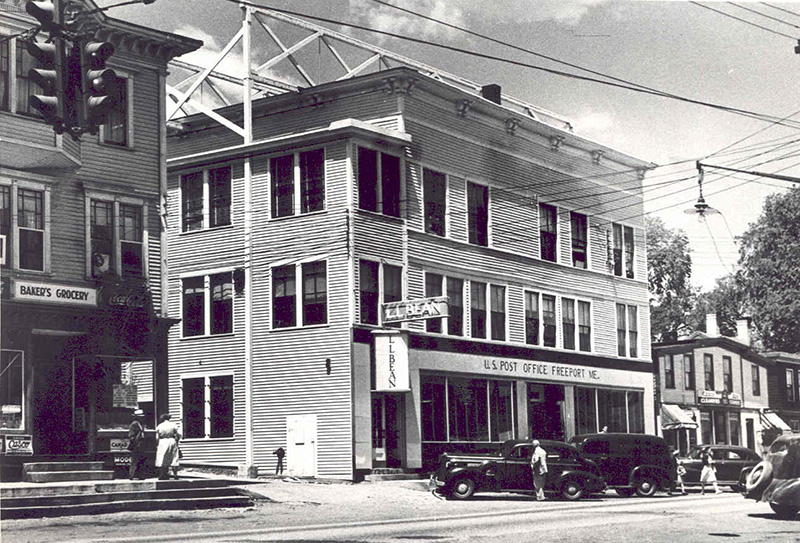 Over the years, the company continued to grow and the postal service continued to be instrumental in this ongoing success. In 1927, the L.L.Bean catalog was named the best in the country by Postage magazine. At the time, the catalog cost only two-cents to mail.

By 1934, the catalog had grown to 52 pages and was mailed to several countries throughout the world. In fact, 74% of the Freeport Post Office’s total business was from L.L.Bean. And not a lot of people know this, but L.L.’s brother Guy Bean was the Freeport postmaster from 1936 to 1948. 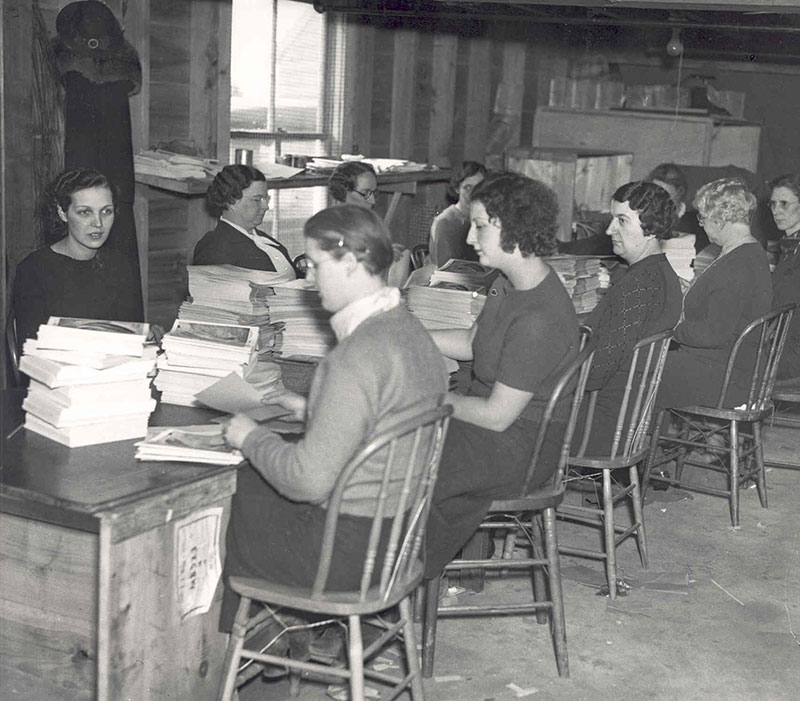 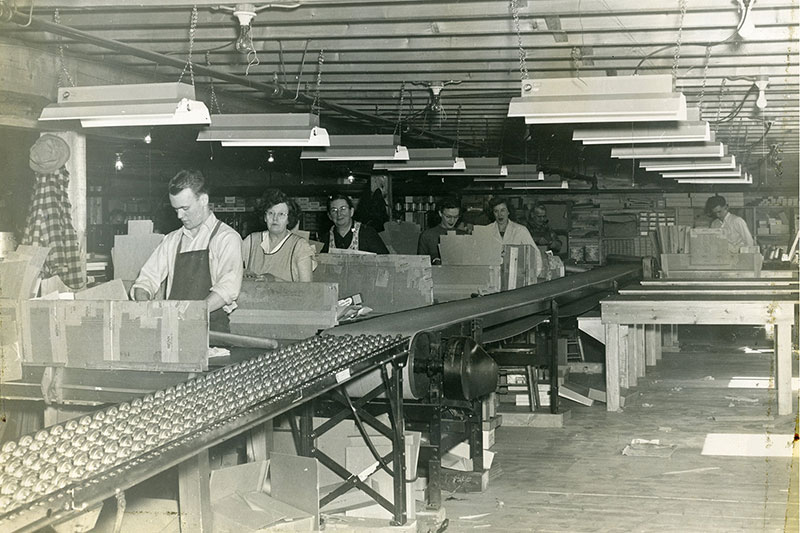 During the forties, while World War II brought on shortages of various materials needed for manufacturing, combined with a reduction in people engaging in leisure time activities, L.L.Bean continued to flourish.  Mail volume at the Freeport post office was so great, that the U.S. Government offered to build a new post office at a different site. L.L., wanting to keep the post office beneath his store, contributed $25,000 of his own money to enlarge the existing post office. 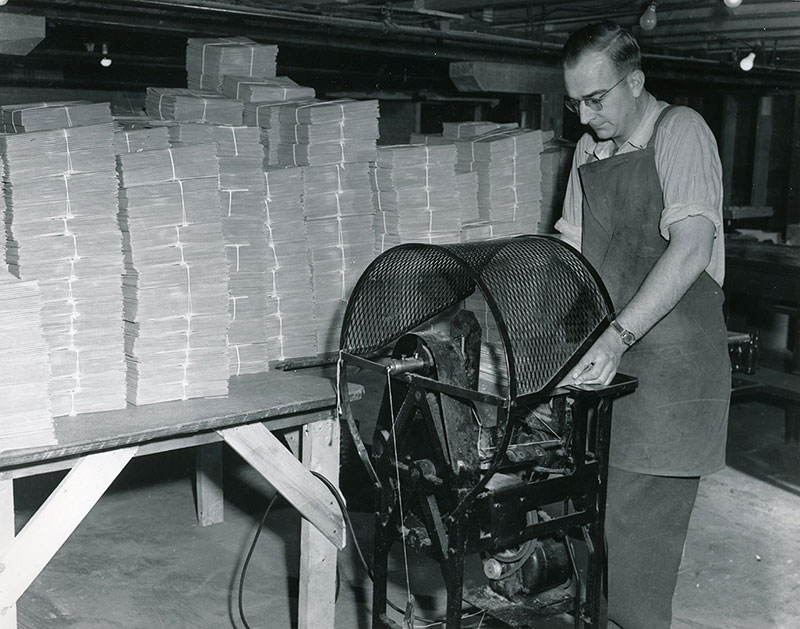 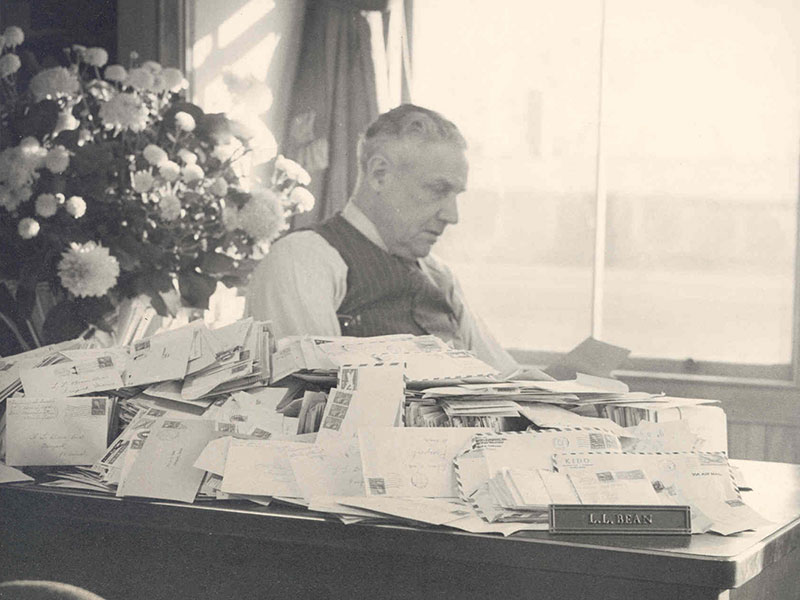 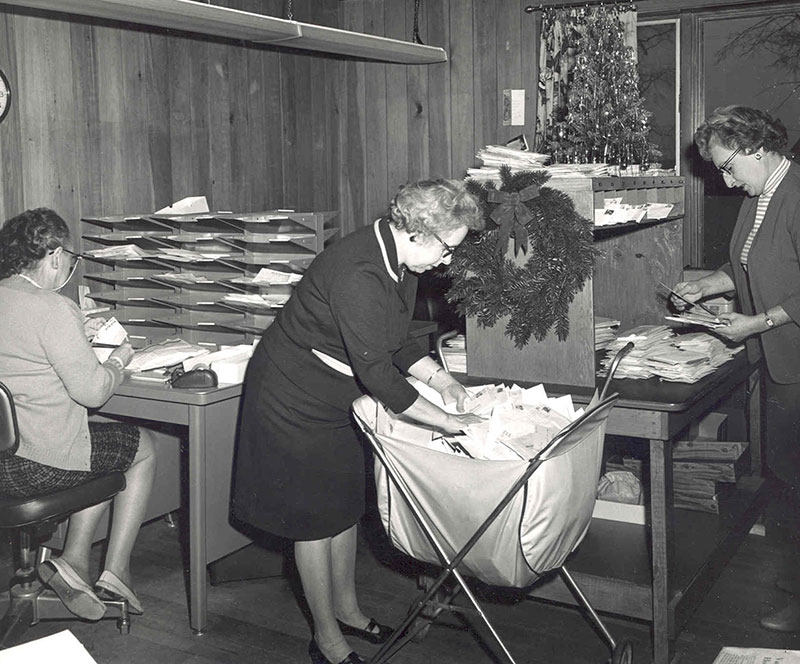 By the mid-fifties, L.L.Bean was mailing over 400,000 catalogs, twice per year to forty eight states, Canada, South America, Afghanistan, Liberia, Hong Kong and many other countries throughout the globe and by the mid-sixties circulation grew to over 600,000 catalogs.

The seventies brought on an amazing time of growth and expansion for L.L.Bean and the mail order business. It was during this time that a new breed of outdoor enthusiasts emerged, the backpackers. These young explorers looked to nature for peace and tranquility, and to L.L.Bean for clothing and gear. In addition, a lot more women were entering the workforce and had less time for conventional store shopping, so they turned to the catalog. By the mid-seventies, we were sending out more than 1.5 million catalogs and were receiving over 4,000 orders by mail each day. During the holidays, this figure would swell to over 40,000.

L.L.Bean’s growth continued into the eighties and to meet the ongoing customer demand, we were sending out more than 75 million catalogs. In the nineties, that figure expanded to over 114,000 million catalogs. In 1995, we launched our web site, which would realize exponential growth over the next twenty years, but the catalog would continue to prove to be an integral part of our multichannel strategy. In the new millennium, over fifty various catalog titles were being sent out to 200 million people to over 170 countries throughout the world. 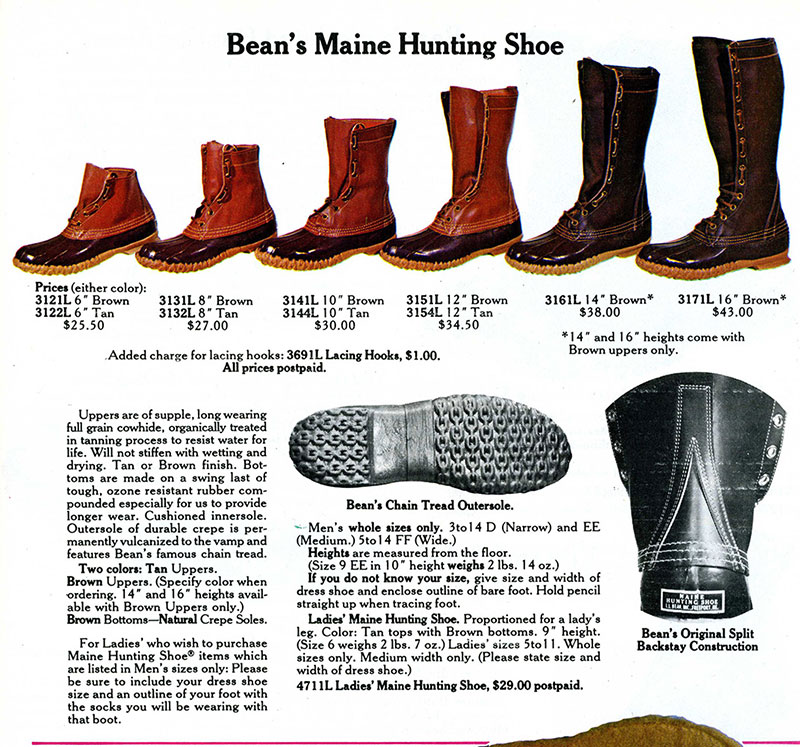 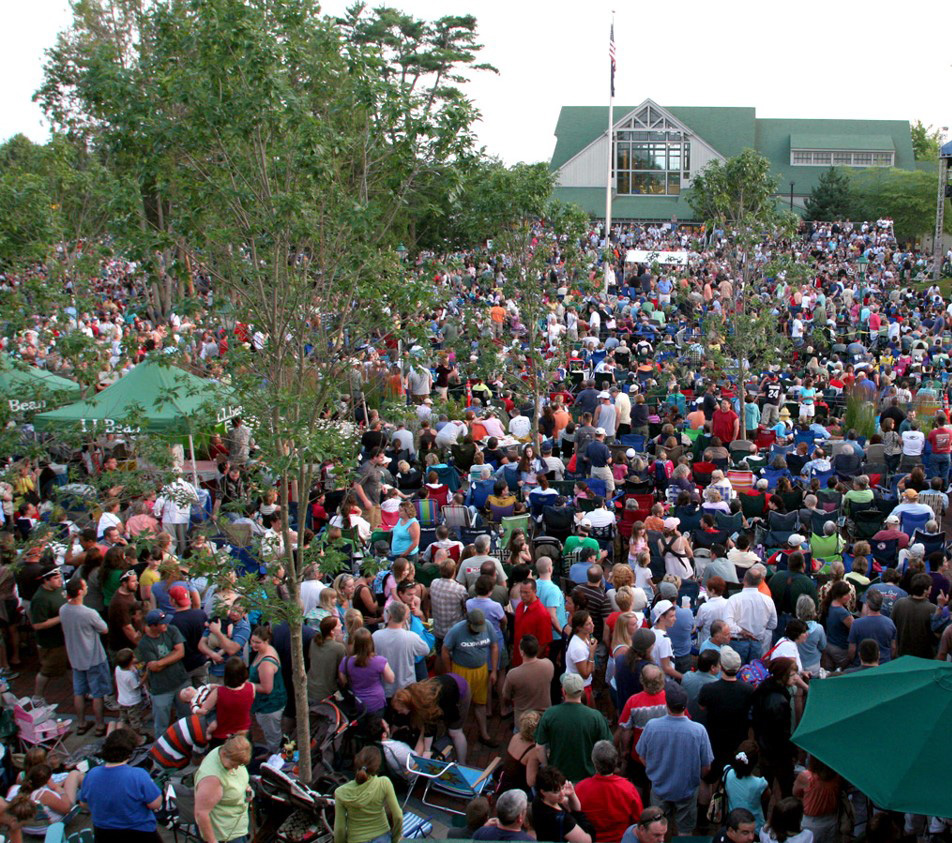 In 2012, L.L.Bean celebrated our 100th anniversary and we know we would not have been able to achieve this remarkable milestone without our partnership with the U.S. Postal Service.

It’s been an amazing journey the last 100 years and while we were happy to have celebrated our 100th anniversary in 2012, we did so not by looking back, but rather facing the direction we always have--forward. And we look forward to another 100 years of ongoing product innovation, expertise, customer service excellence, and continuing to share our passion for the outdoors with future generations for the next 100 years and beyond. 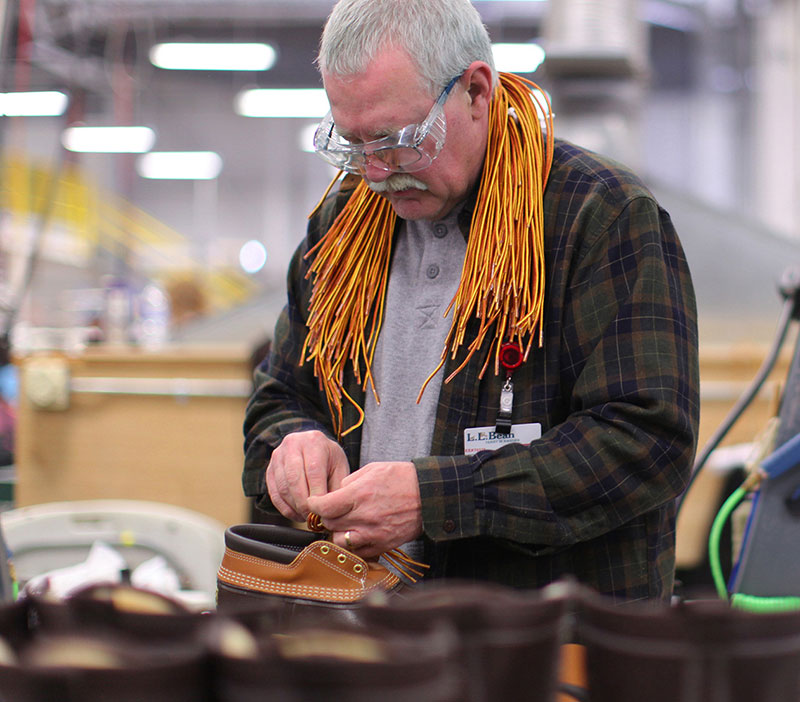 We give our employees a lot of credit for our ongoing success and leaders work hard to empower them with exemplary training and other resources that enable them to do their job--that being providing some of the best customer service in the industry. Employees here take pride in the work they do and without their remarkable talents and total dedication to providing world-class service, we simply would not be the organization we are today, nor would we be receiving the accolades that we do for our customer service.

We also credit the great state of Maine for part of our success. Maine and L.L.Bean are inextricably linked and we assuredly would not be the same company we are today if we had started somewhere else. Maine is a state unmatched in its rugged, natural beauty. Combined with the dynamics of the four-seasons, its robust natural resources and the opportunities for a host of outdoor activities such as hunting, camping, hiking, fishing, biking, paddling and more, we can’t think of a better birthplace for L.L.Bean. In fact, it was the rugged terrain and rough weather that served as the inspiration for the development of the product that first started our company, the Bean Boot.

While the retail industry continues to evolve with the advent of the internet and smart devices, we understand that the catalog and the U.S. Postal Service, like our very own employees and our home state of Maine, will continue to play an integral role in our success for many, many years to come, as it has for the past decade. 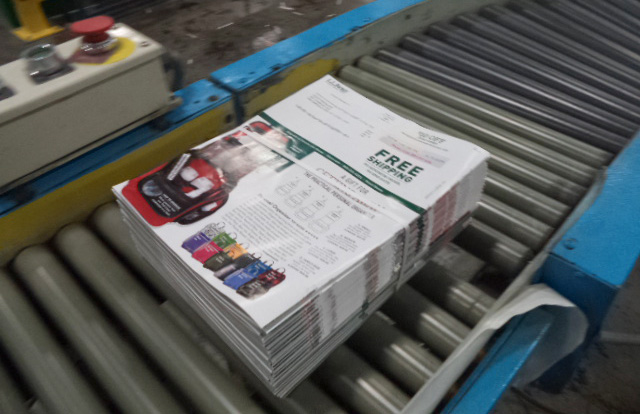 ‹ Littleton Coin Company up Quad/Graphics ›
Back to Top