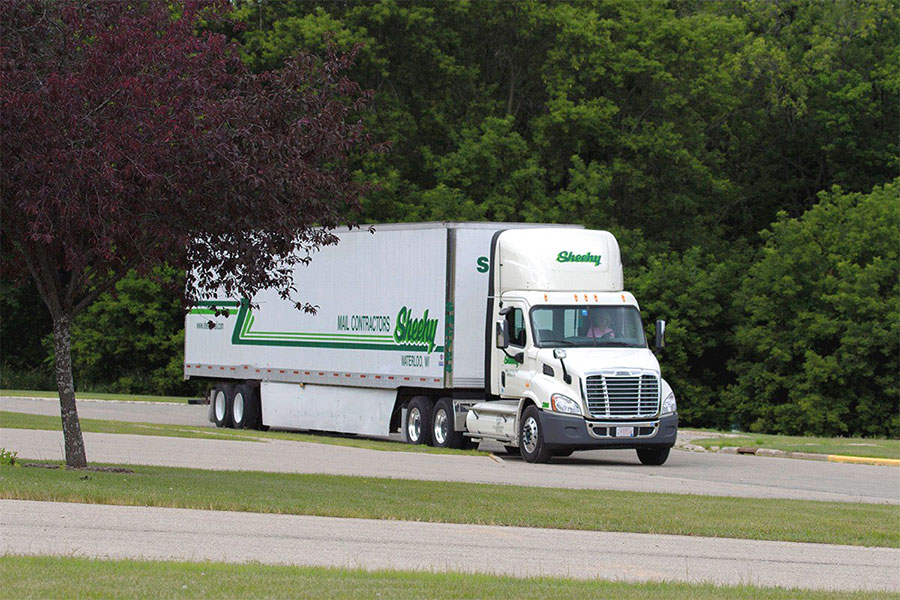 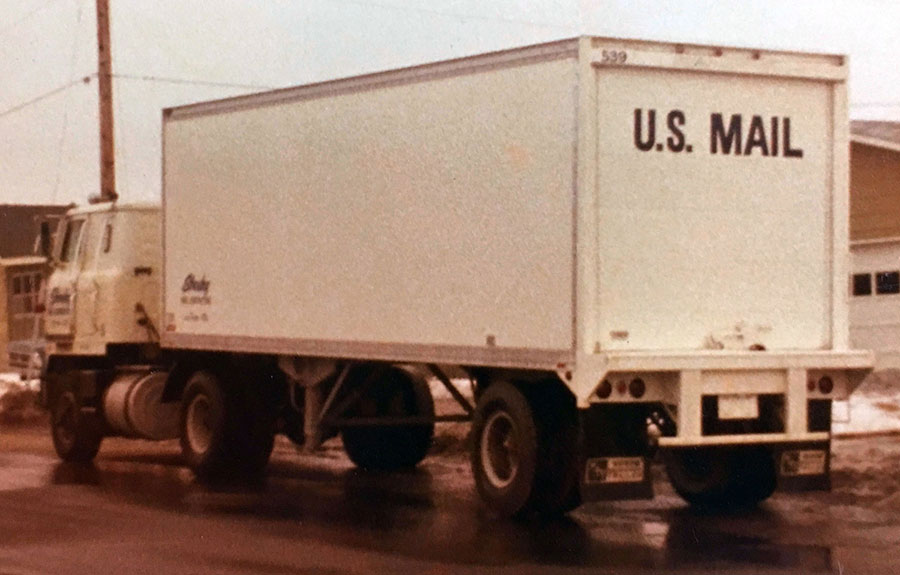 One of the first Semis operated by Sheehy mail in 1975 expanding from delivery vehicles to line haul operations. This truck hauled Wall Street Journals from Chicago, IL to Portage WI and was the overnight segment for the newspaper from Chicago to most of Wisconsin and Minneapolis, MN.

The HCR industry is the privatized portion of the postal transportation industry. The United States Postal Service for over a hundred years has contracted out parts of its transportation system. A contractor bids for a specific service that is offered by the USPS, the USPS evaluates the bids and offers a contract to the best value proposition it receives. Many items go into an evaluation such as Price, Past Performance, operational plans, financial resources and use of innovation or alternative fuels. 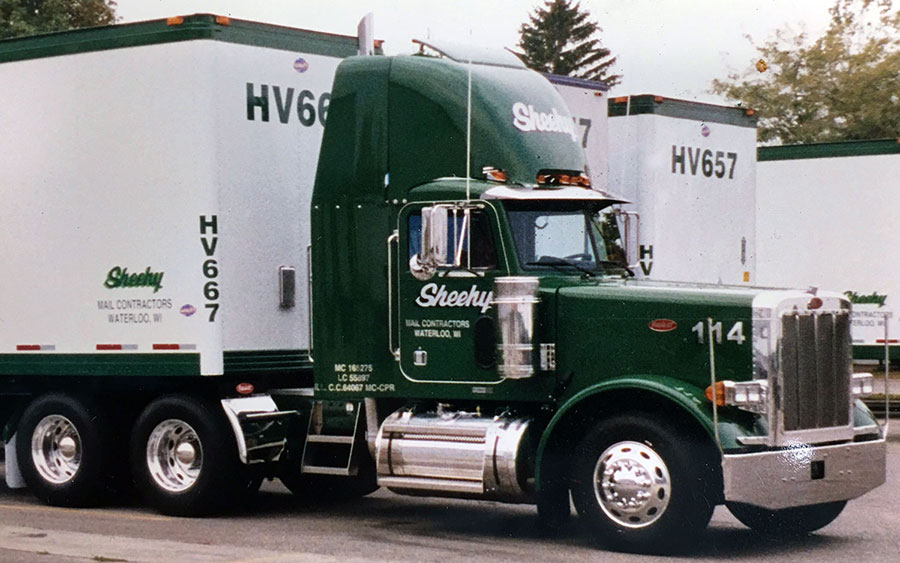 Truck Jim Sheehy drove on a regular basis during his tenure with Sheehy.

The Sheehy family became involved with the Post Office Department in 1952 when Gerald P Sheehy began operating star routes in the La Crosse Wisconsin sectional center. Gerald and his wife Helen operated a few straight trucks hauling the mail from the La Crosse, WI sectional center to the outlying Post Offices in the area. The company continued operation as Gerald Sheehy & Sons until 1983. James P Sheehy the oldest son of Gerald and Helen became interested in the mail business and bid his own route in 1968. James and his wife Lucy built their mail business in tandem with his father Gerald and in 1975 moved from straight truck deliveries to line haul semi operations with a contract from Portage, WI to Chicago, IL. In 1978 Jim and Lucy expanded the mail business by winning a contract to haul mail from the printing plants in Wisconsin to the Chicago bulk mail Center. In 1981 Jim and Lucy’s son John joined the business and in 1983 another son Robert joined. In 1983 the original business owned by Gerald and Helen Sheehy was sold to Robert Proksch of Proksch Transit Inc. which is still in business today. The Sheehy family grew the postal contracting and commercial freight business to over 100 trucks and 200 employees by the time Jim and Lucy retired in 2012. John Sheehy’s sons Jonathan and Mathew joined the business in 2011 and 2014 respectfully, marking the beginning of the 4th generation of Sheehy’s in the HCR business. 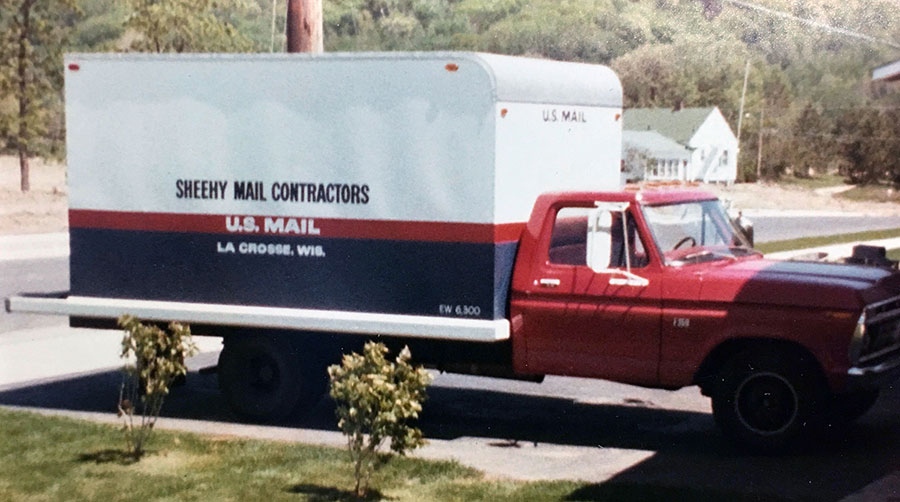 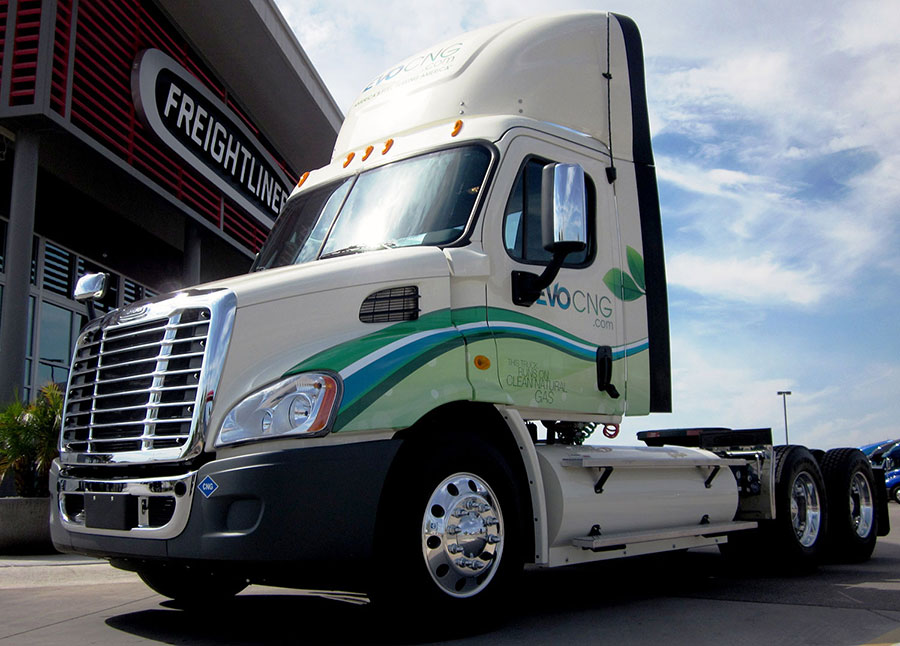 The first CNG trucks used by Sheehy were wrapped in promotional graphics to draw attention to the use of clean fuel and to promote the use of the new CNG fueling stations.

The Sheehy family legacy revolves around innovation and cost containment. The success of the family business can be traced back to hard work, but also the dedication to always become a better supplier. In 1968 there were not too many options for truck van bodies, so Gerald Sheehy began building his own van bodies and installed them on his trucks. Gerald understood that saving fuel meant less cost even in 1968 and came up with a rolled front section on his vans to achieve cleaner aerodynamics which saved fuel. In the 1970’s Jim Sheehy converted gas powered vehicles to Diesel in an effort to achieve great efficiency. Then in 1989 John Sheehy implemented electronic on board computers to monitor and track what the fleet was doing and then took that knowledge to train his drivers and attain greater efficiencies. The entry into electronic on-board computers helped to start another company owned by the Sheehy family. This company “Loadtrek LLC” was started in 2003 and provides transportation management systems to the whole trucking industry. In 2012 John Sheehy experimented with and finally in 2013 implemented Natural Gas vehicles in the fleet. This alternative fuel initiative leads the industry towards a cleaner more price stable fuel. The Natural Gas conversion process implemented by John Sheehy and the contracting officer became the standard for which other contractors worked with alternative fuels moving forward. The Sheehy family continues to innovate and reinvent the company to achieve success.

The National Star Route Mail Contractors Association is an associated that has members of the HCR industry. This organization dates back to the 1940’s and was established to give mail contractors an education platform as well as a voice to government. Gerald Sheehy and Jim Sheehy were active members of this group dating back to the late 1950’s. Lucy Sheehy served as the Secretary Treasurer for the State branch of Wisconsin in the 1990’s. The family was active at the state level in Wisconsin for many years. John Sheehy was elected Vice President of the Wisconsin branch in 2003 and President of the Wisconsin branch in 2005. John moved up the board of directors when he was elected to the national regional director for section 6 in 2008. John served on the board of directors and ran unsuccessfully for national President in 2010. John was appointed to the Policy committee by then Policy committee chair and former national President Brownie Matheson and in 2012 was elected as national President at the national convention in Florida. John was reelected in 2014 for an additional 2-year term. During John’s tenure as national President of the Associating he forged new working relationships with all branches of the USPS and helped to end a very unpopular fuel management program. The Sheehy family continues to provide leadership to this industry. 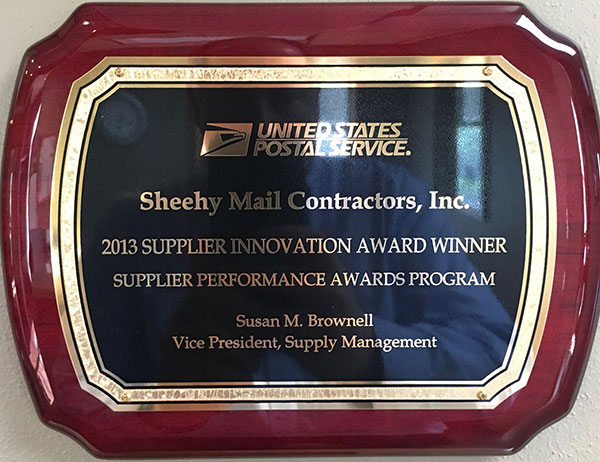 Sheehy was awarded the USPS Innovation award in 2013 for the work they did to make CNG use in large trucks a reality.

Challenges for the Future

The HCR industry provides the transportation infrastructure to the USPS and to the American People. Prior to electronic mail (Email) most Americans communicated through the US Mail. Letters helped Americans stay in touch, Printed Magazines and catalogs were the media that Americans depended on for information. The HCR industry and the Sheehy family transported this type of mail for several decades. The mailing industry has changed with the advent of electronic mail. Today most of the mail is in the form of packages and are a direct result of on-line stores. The pressures for quick service low cost and last mile delivery challenge the current transportation infrastructure. Sheehy is using its experience, data collection systems and innovation to solve the new challenges moving into the future. Mail is still an important industry and today as in the past enhances the lives of every American. 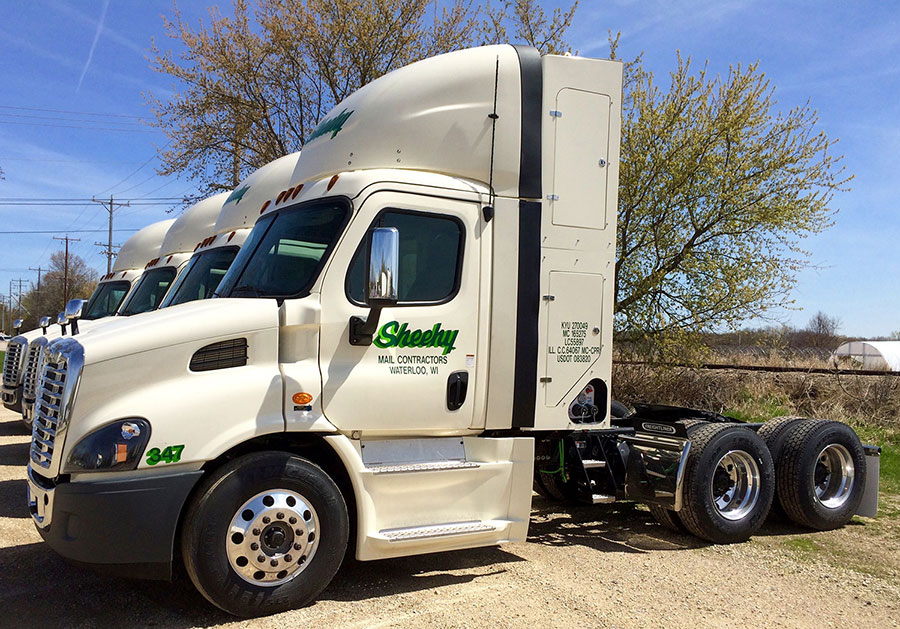 ‹ OSM Worldwide up The Production Management Group ›
Back to Top