Imagine yourself living in a remote village in Southern China, among the Aymara people high in the Peruvian Altiplano or with the indigenous tribes of Tanzania sometime in the early 20th century. You have just started to learn the language and are adjusting to new cultural norms. You’ve brought a few supplies and the hope of your Catholic faith that your actions will make a difference in someone else’s life. The only tie to the life you left behind in the United States is the fragile letters that have sailed across oceans to reach you. This is the life of the Priests, Brothers and Sisters of the Catholic Foreign Mission Society of America and the Maryknoll Sisters of St. Dominic. 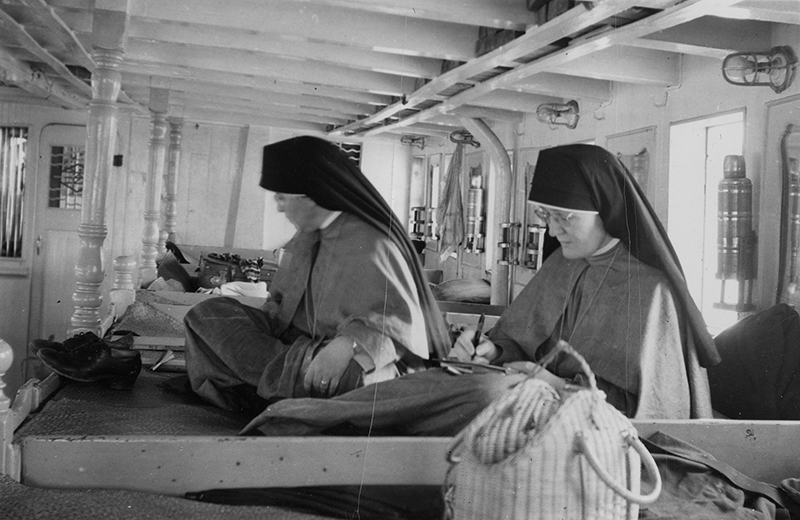 The Catholic Foreign Mission Society of America (commonly known as the Maryknoll Fathers and Brothers) and the Maryknoll Sisters of St. Dominic, founded in 1911 and 1912 respectively, are the first American Society and Congregation of religious dedicated to foreign mission. Members of the Society and Congregation would bring the message of Jesus Christ and the Catholic faith to the poor and marginalized of the world. Maryknollers promote healthcare, provide educational opportunities, combat poverty, build communities and spread justice and peace among the people they serve.

Millions of letters have flowed in and out of Maryknoll for more than one hundred years in the mailbags of the United States Postal Service (USPS). These letters brought news of the health and well-being of its missioners, stories of their experiences in the field and reports of conditions affecting the people in the countries where they serve. They kept the Society running, assured missioners’ families and friends of their security and helped maintain important relationships with supporters and benefactors.

The idea of Maryknoll itself was in part born of inspiration that arrived in the mail.

“It was an affecting letter, and I have never forgotten it.” These words, spoken by co-founder Fr. James Anthony Walsh, reference handwritten letters from European priests describing their mission experiences in foreign lands. Their words inspired Fr. Walsh to explore and promote the role American Catholics could have in affecting change in the world.

This idea was shared by co-founder Fr. Thomas Frederick Price and kept alive through their correspondence as seen in this excerpt from a September 21, 1910 letter from Fr. Price to Fr. Walsh:

“My dear Father Walsh,
I write you glad tidings of great joy. The unanimous decision of our conference in St. Mary’s Seminary, Baltimore, was that I should begin this work of the Foreign Mission Seminary… We decided or rather gave our opinion, that you ought to come into this work with me… Father Dyer declares that with you and me in it the work is an assured success.” 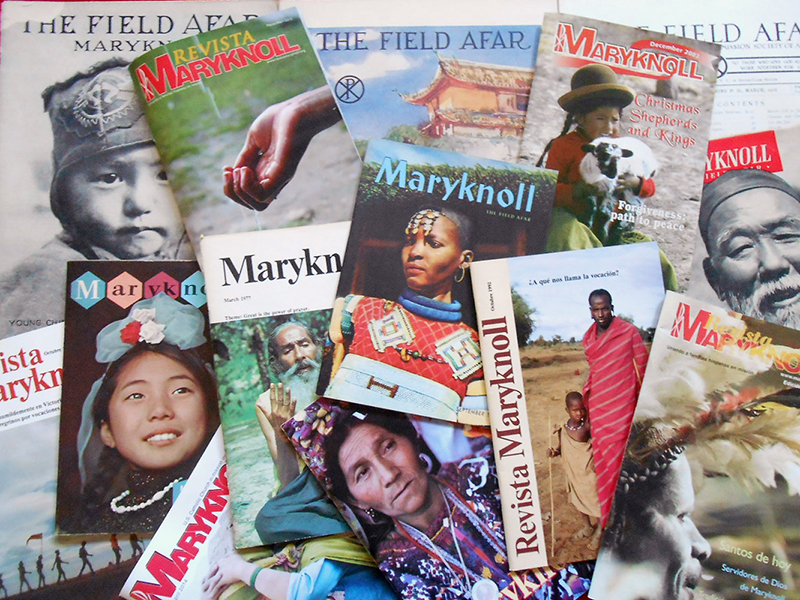 Along with the work of the co-founders, the dream of Maryknoll would never have been realized without educating American Catholic religious and lay persons about the importance of mission work. The underlying hope then and now was that knowledge would lead to action. The primary educational vehicle for this knowledge was The Field Afar, a magazine first published in January 1907, when Fr. Walsh was the Director of the Society of the Propagation of the Faith in Boston. The Boston Post Office saw to it that this periodical, mailed as second-class matter, was delivered to individual and organizational subscribers, bringing the message of mission to their doorsteps. 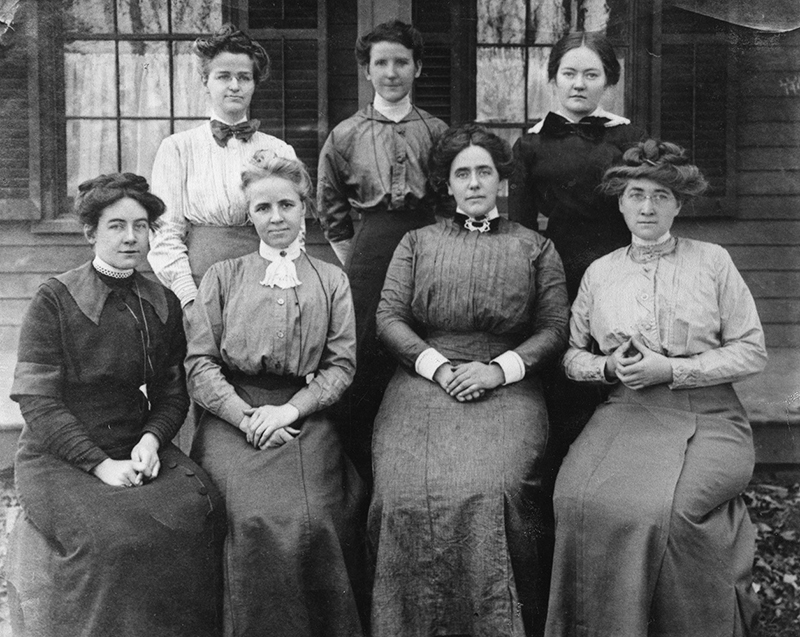 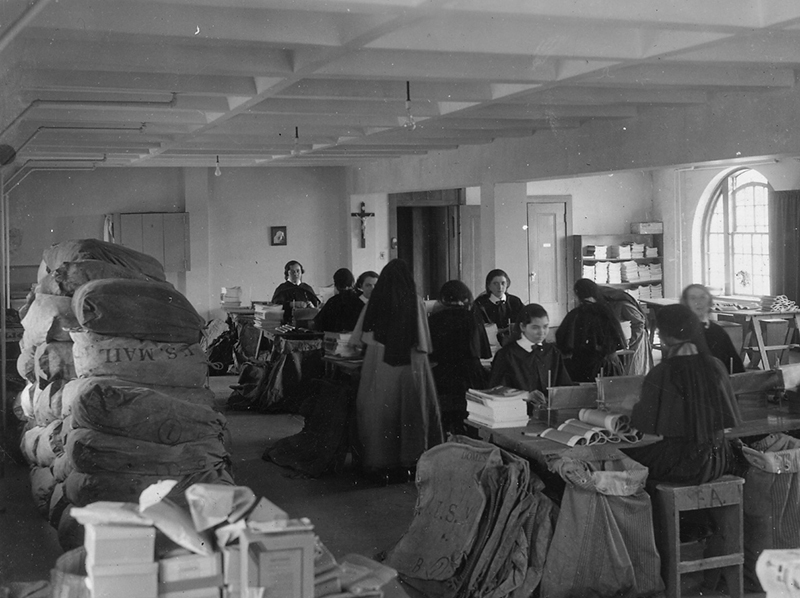 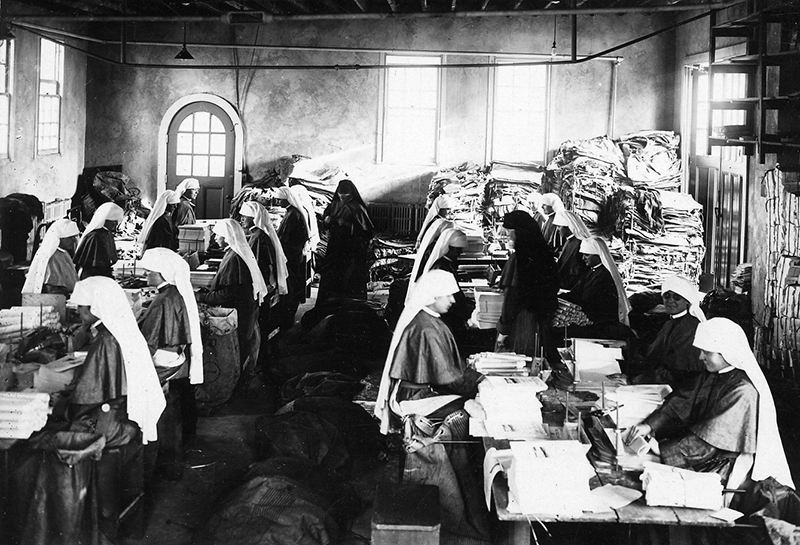 Selecting, translating and editing the numerous mission letters that arrived in the daily mail so that they could be used in The Field Afar was a time consuming job. In 1908 a young woman much interested in foreign missions by the name of Mollie Rogers began assisting Fr. Walsh with this work. In time, Mollie would lead a band of women who moved from Boston to Maryknoll, NY, to support the new foreign mission society. This group of women would grow in numbers and transform from supporting the Maryknoll Fathers and Brothers to a full-fledged foreign mission congregation of their own. Mollie would become Mother Mary Joseph Rogers, the Foundress of this congregation. 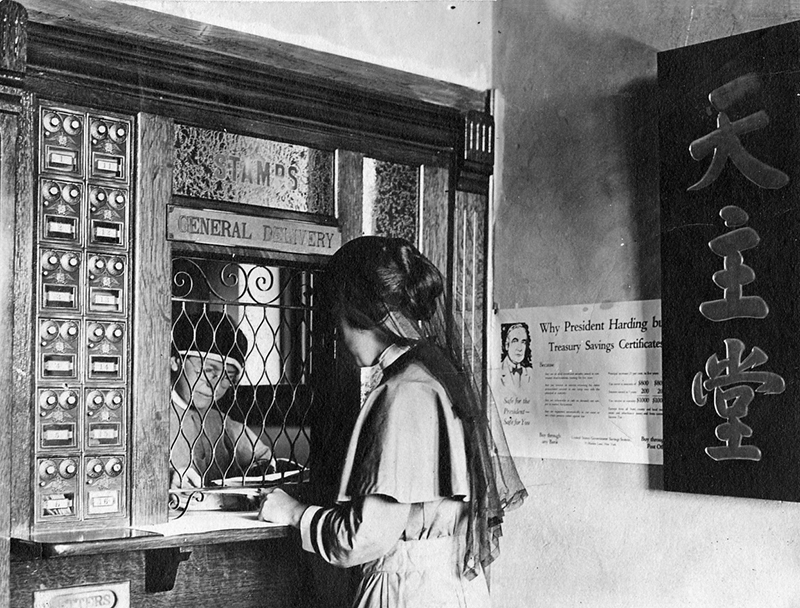 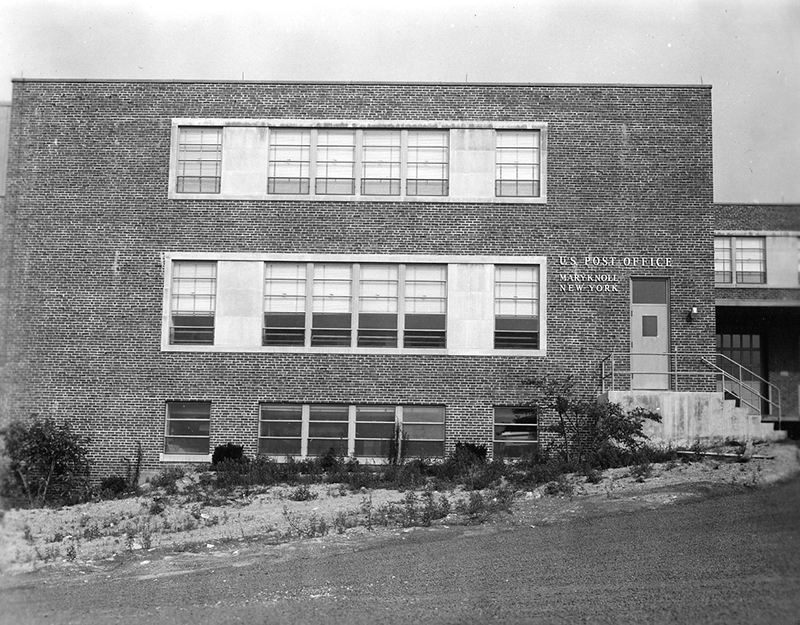 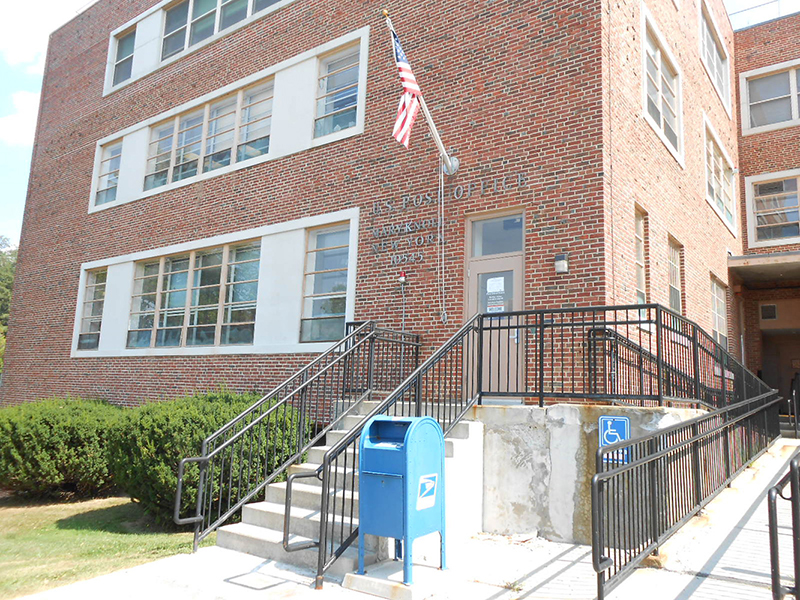 Among the important work these women tackled was the production and mailing of The Field Afar. In 1917, Katherine Slattery, a woman from Athens, NY, joined the Maryknoll Sisters. Katherine had worked for the Postal Service for twenty-one years prior to entering Maryknoll. Her expertise was just what Maryknoll needed to establish an official post office. In 1921 Katherine, now Sr. Margaret Mary, opened the first United States Post Office at Maryknoll and became its first Postmistress. Under her direction, it transformed from a Fourth Class to a First Class Post Office. She also became one of the founding members of the Westchester Postmasters Association. After Sr. Margaret Mary retired in 1945, two Maryknoll Sisters and one Maryknoll Brother served as postmistresses/postmaster over the next forty years.  The volume of mail flowing through Maryknoll reached sufficient levels that it eventually required its own zip code 10545. 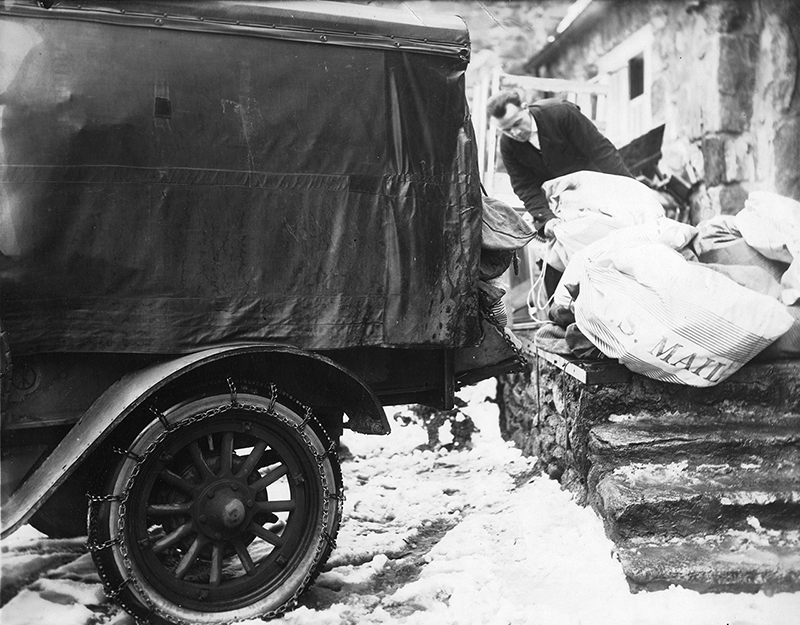 Loading The Field Afar to be delivered to the Ossining, New York train station, 1924. 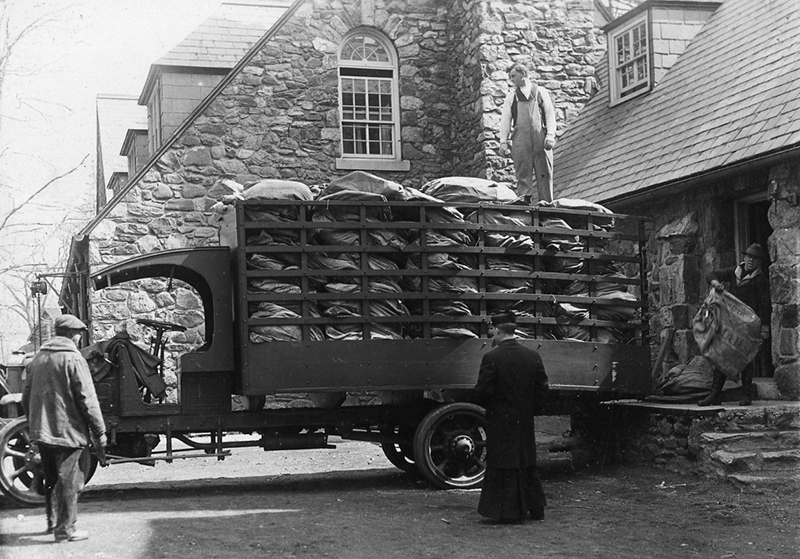 One of Sr. Margaret Mary’s duties was to ensure the monthly mailing of The Field Afar. In 1937, this amounted to approximately 1000 bags of mail that had to be hauled to the Ossining train station and sorted into the mail car by the Maryknoll Brothers. By September 1940 the number of sacks rose to 2,037 which weighed 45,332 pounds. Today, The Field Afar, now known as Maryknoll magazine, and its Spanish equivalent Revista, have a readership of more than 330,000 and they are still faithfully delivered to mailboxes by the USPS.

Over time, other mailings, including resources for teachers and students and various appeals for assistance, have supplemented the magazine. The core of each mailing still draws on the first-hand accounts mailed home by Maryknoll missioners. The USPS has not only helped Maryknoll distribute its message, but it has also carried back the letters of support, encouragement, prayers and financial assistance that makes mission possible.

Most recently, the Postal Service helped Maryknoll Fathers and Brothers aid the victims of the 2015 earthquakes in Nepal. The Nepal Relief Appeal was mailed through the USPS to 275,000 of its generous benefactors raising over one million dollars in less than two months. Fr. Joseph Thaler, M.M. has had a presence there for over thirty years and was able to work with other agencies putting benefactors’ gifts into action by first supplying food, clean water, tents and medical supplies. This was followed by delivering materials to rebuild schools and homes, providing medical assistance, reinstituting educational programs for the disabled and distributing books and school supplies. The work continues to rebuild Nepal. 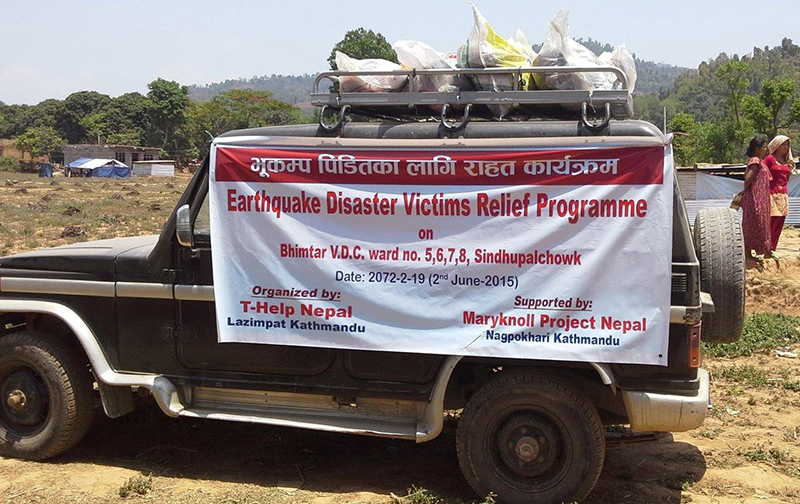 Today, more than one hundred years later, the USPS is still Maryknoll’s partner in maintaining relationships with its missioners overseas and its supporters at home, providing information about the plight of the poor and marginalized of the world and inspiring action among American Catholics who have been moved by the message of mission. 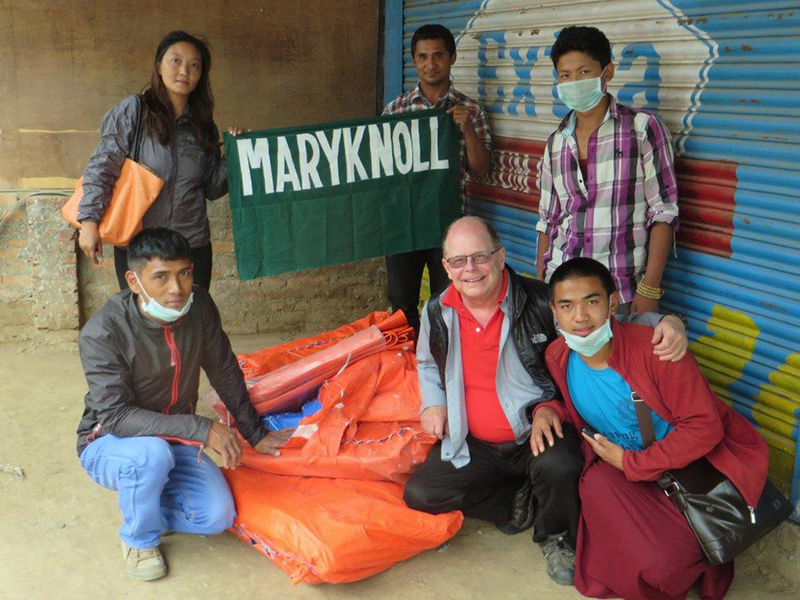 ‹ Highlights up National Geographic ›
Back to Top