I've been in the newspaper industry for 35 years

but really all my life because it's a family business.

Our newspaper actually is the product of the merger of two papers.

One, The Lexington Gazette, goes all the way back to 1801.

And the paper my family was associated with

was the Rockbridge County News started in 1884.

My great-grandfather got involved with it about

two years after it was started.

And within a year was the solo owner and he ran it for about 45 years.

And my grandfather was an attorney

But when I got into the newspaper business as a kid,

I stuffed inserts, I took pictures and I was fortunate enough

to come in at the end of the old hot type days,

the days when the paper was more of an industrial process than anything else.

Today it's a computer process.

Lead type was used to print the paper.

And all that was done, the type was created on a mono-type machines.

And when with the paper was all printed, all that type

went into a big hopper and was melted down

in a furnace and was poured back out in ingots.

the kind that you see in the old movies like The Front Page.

So it took a beautiful picture. It was a huge negative.

But you only had these slides with only two pieces of film in it so,

you we were lucky to get maybe a dozen shots.

So everyone had to count.

So now with digital cameras,

I don't know what to do because I still keep thinking,

I only got one or two shots I can make.

It's all different now and it's better but it's fun

to be able to go back and remember how it was

and to have gone through that transition.

The News-Gazette and the United States Postal Service 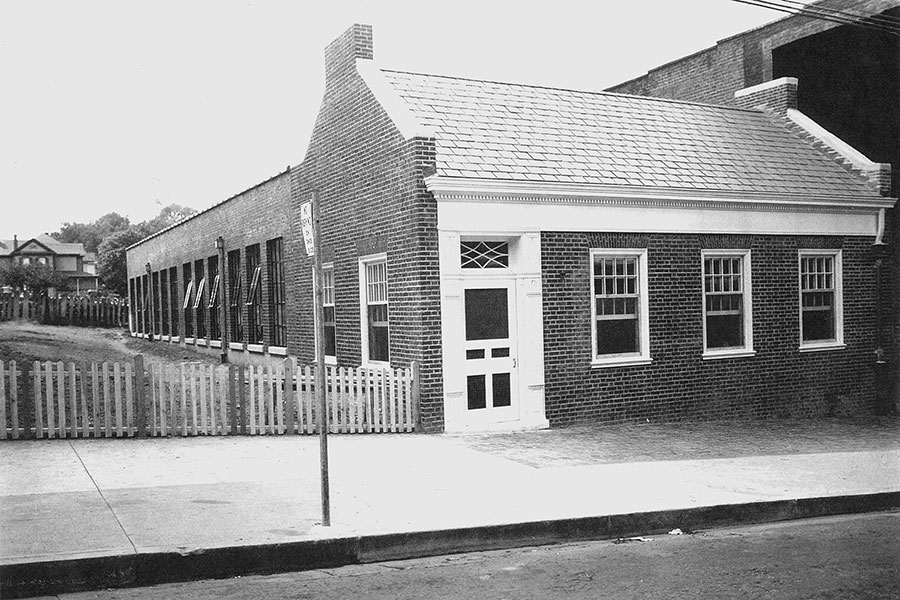 The newly-built Rockbridge County News building on Nelson Street in Lexington, VA in 1937. Because a building that housed the newspaper had burned and a subsequent location had been threatened by a nearby fire, the owners incorporated mostly fireproof materials in the construction of the building. This building, with additions, still serves as the home of The News-Gazette. 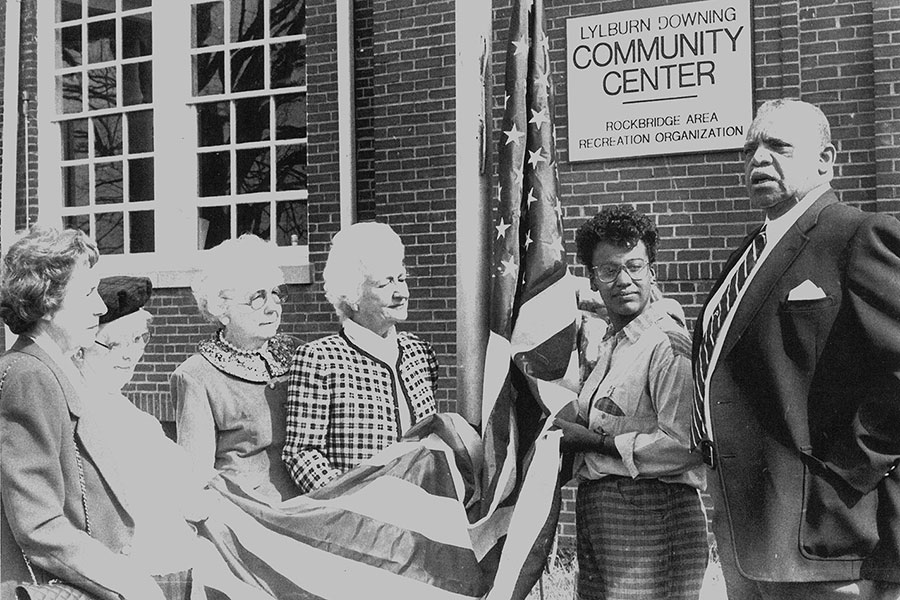 Flag Presentation
Members of the Virginia Frontier Chapter of the Daughters of the American Revolution present a flag for display at the Lylburn Downing Community Center. Community newspapers publish major breaking news stories as well as pieces like this one that show local groups doing good for their communities.

The News-Gazette traces its beginning back to 1801, when the Rockbridge Repository was started in Lexington. The paper went through several owners and names but by the mid-1820s was known as the Lexington Gazette. The Gazette was able to publish almost continuously through the Civil War, even after Gen. David Hunter’s Union troops raided Lexington, and among other depredations, smashed the Gazette’s press and threw the hand-set type in the street. Within a few weeks, with a new press, the paper was back publishing.

In 1884, two former employees of the Gazette, Rev. A. Poe Boude and J. Scott Moore started another newspaper in Lexington. Three years later, the founders sold The Rockbridge County News to Samuel J. Graham and Matthew W. Paxton. Graham was a young attorney, and Paxton was a farmer and deputy collector of internal revenue. A year later, Graham sold his interest in the paper to Paxton. After the Democratic Party lost the presidency in 1888, Paxton resigned his tax collection job and devoted himself solely to running the County News until his death in 1935.

The founders had stated that they would not comment on local politics, except to campaign for local prohibition. The new owners didn’t share Boude and Moore’s philosophy, including their views on prohibition. Paxton later wrote that the duty of the newspaper was to be “a faithful chronicler of current events.” Under his leadership, the paper devoted space to discussions of public affairs. The paper editorialized on local, state and national issues, endorsed candidates, and encouraged discussion on issues. The News-Gazette, successor to the County News, still regards this as an essential function of any local newspaper. 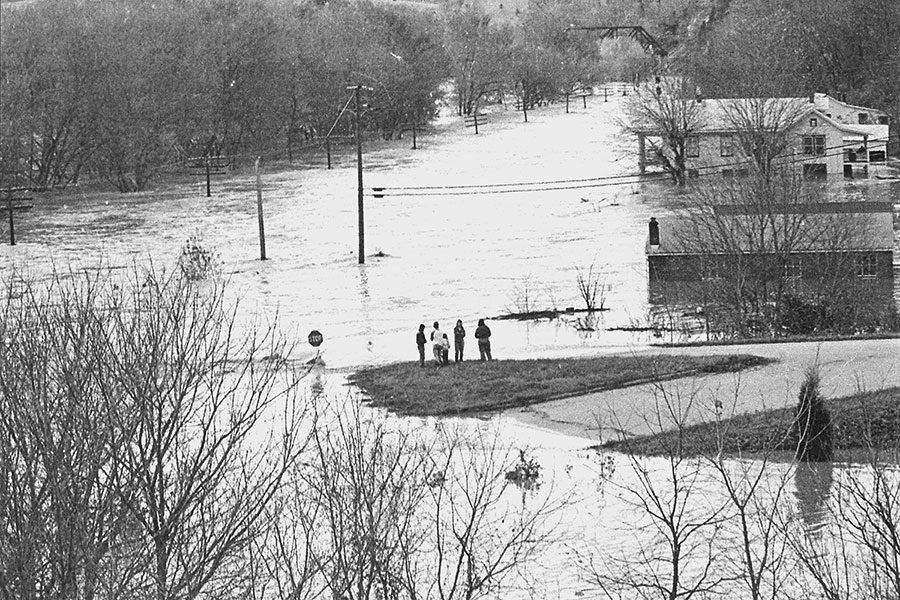 Western Virginia flood, 1985
This photo of a major flood in November, 1985 that struck western Virginia shows how community newspapers report on big events that affect many people in the newspaper’s community.

One feature of the County News was the short articles from correspondents scattered around the county. This was probably a very early example of ‘hyperlocal’ coverage. They reported sicknesses, visitations, church events and reunions. The News-Gazette still has several county correspondents in 2016.

The Lexington Gazette went through a series of owners through the end of the 19th century and into the 20th. By the 1920s, Benjamin Harlow was owner, and his family would run the Gazette until 1962.

By the early 1960s, the owners of the Gazette and County News realized that they were chasing the same advertisers and subscribers, and, in 1962, agreed to merge. The new flag, The News-Gazette, combined elements from the names of both predecessor papers. Matthew Paxton III became editor, and F. Houston Harlow, was named business manager. 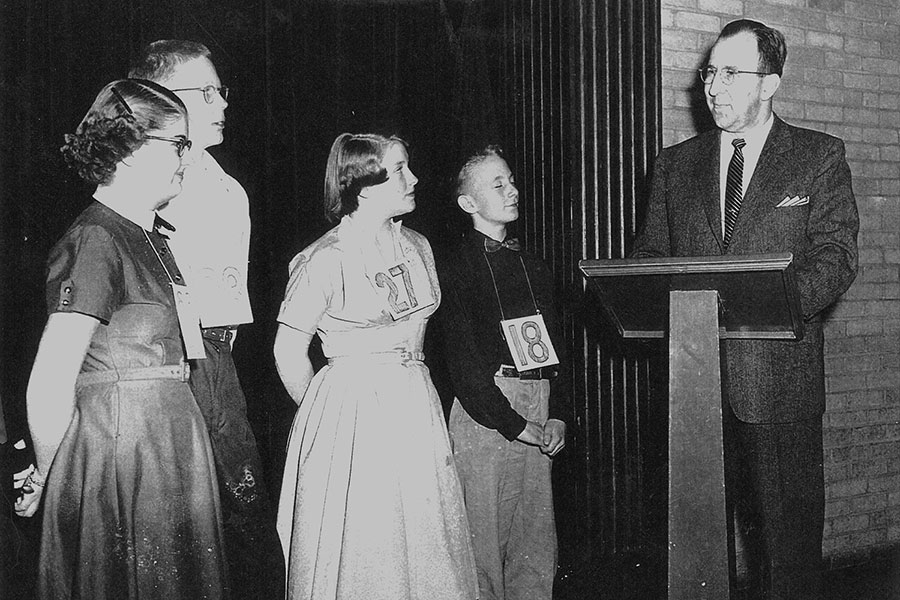 Spelling bee in 1955
This image from a spelling bee in 1955 is emblematic of the emphasis that many community newspapers put on education in their communities. Community newspapers see themselves as being a part of the education system because of the role they play in informing their communities on issues of local importance, and in promoting civic engagement by local citizens.

The 1970s brought much change to The News-Gazette. Harlow died in 1970, and Ewing S. Humphreys bought a portion of his stock. In 1971, the paper retired its letterpress and Linotypes for computer-generated type and offset printing. Because of the cost of making this change, it was decided not to buy a press but to contract out the printing, which has been the case ever since.

Throughout the history of The News-Gazette and its predecessors, the papers have had a close relationship with the American postal system. Indeed, an 1856 edition of the Lexington Gazette advertised an annual subscription for $2.00, paid in advance. During the Civil War, when inflation reduced the value of paper money, the paper accepted bushels of wheat and corn, and chickens in exchange for subscriptions. 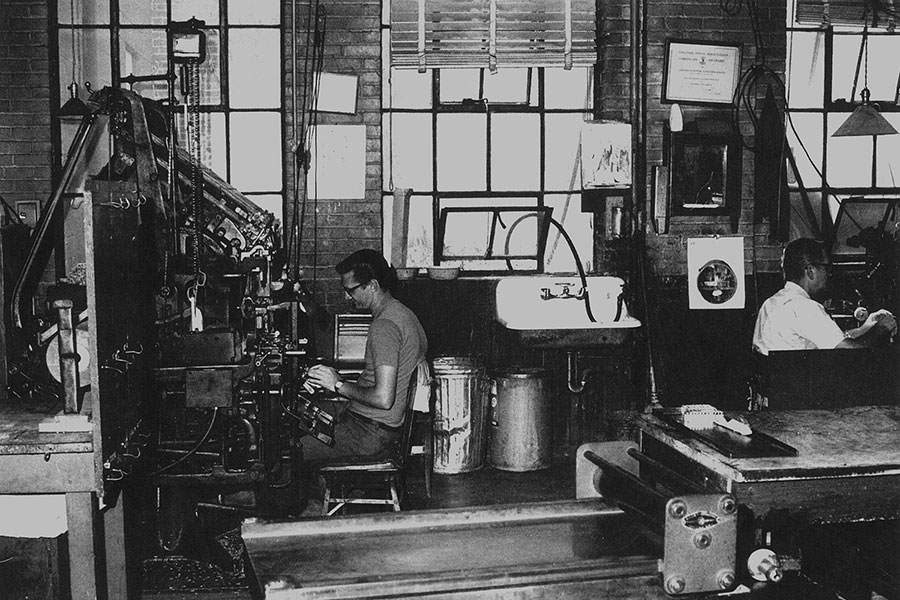 The News-Gazette's Linotype machines
Before computers came into wide use in the newspaper industry in the 1960s and 70s, newspapers were printed with raised-letter lead type, in a process called letterpress. The large machine on the left is called a Linotype, and the operator used it to cast lines of letters in lead that were then placed into columns and ultimately entire pages, from which the newspaper was printed. The News-Gazette retired its Linotype machines and the press that printed with lead type in 1971.

Over time, subscription prices rose with the cost of mailing but throughout, mailing the newspaper remained more cost effective for the company than paying carriers to deliver it. That holds true today.

Every Wednesday, The News-Gazette delivers information about local government actions, about local, state and even national politics, about local events such as concerts, lectures, festivals and fairs, outdoor activities, fundraisers, church services, awards to local people, coverage of local sports teams, business openings and closings, advertising by local businesses and classified advertising by individuals. Its editorials often serve to raise awareness of problems or areas of concern for local government officials and for the public at large. Editorials often spark letters to the editor sharing views different from those expressed in the editorial, which the newspaper welcomes.

Besides serving the information needs of local readers, The News-Gazette serves local businesses by providing an advertising medium that reaches over half the homes in the Rockbridge County area. News-Gazette advertising helps car dealers sell new and used cars, helps clothing stores sell the latest fashions or winter coats, and helps local service businesses to reach new customers. Shopping information from scores of local and regional businesses is delivered by mail in the newspaper to thousands of Rockbridge County homes every week. 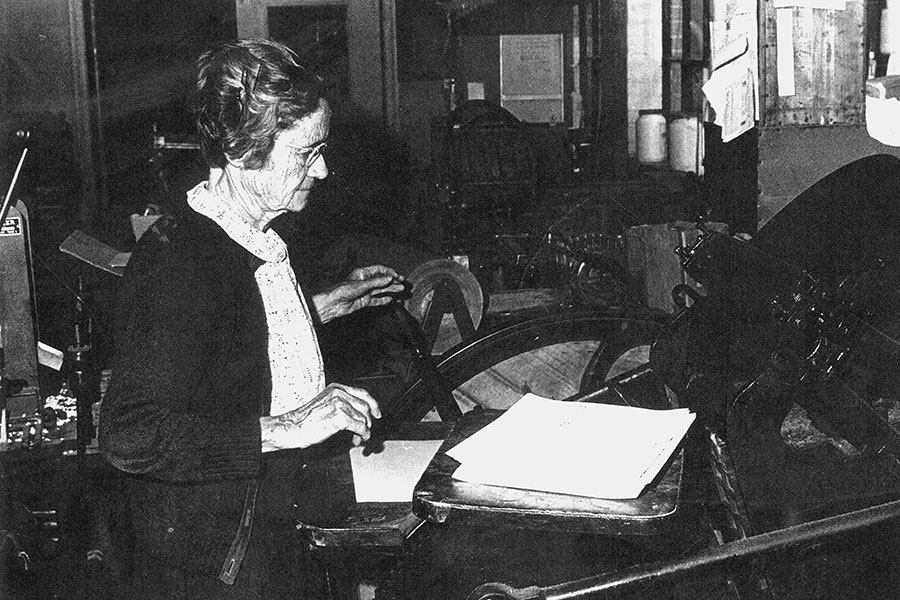 The News-Gazette, through its news coverage of local government and politics, its editorials, and by urging readers to write letters to the editor, encourages participation in our democratic system. During elections, the newspaper runs candidate profiles and runs in-depth coverage of local election results.

The US Postal Service and The News-Gazette, for over 200 years, have partnered to bring news and information to the people of Rockbridge County, Virginia. That partnership is as strong today and as necessary as it was in 19th century America.

‹ The Nebraska Signal up The Times Leader ›
Back to Top