For nearly 100 years, Easterseals has been the indispensable resource for people and families challenged by disabilities, touching millions of lives through its programs, services and community involvement. From its humble beginnings, the organization has transformed through the years expanding its reach to 74 affiliates nationwide with hundreds of programs and services unique to each community’s needs. Today, we are changing the way the world defines and views disabilities by making profound, positive differences in peoples’ lives every day.

Easterseals: Who We Are

Easter Seals is you, your family your

neighbors and your friends. Together we

are thousands of volunteers and millions

of donors helping more than 1 million

is there for children, parents, seniors,

thousands of care centers across the

close to home. Easter Seals is changing the

way the world defines and views

disabilities believing everyone with a

disability can reach their potential.

Easter Seals is you me all of us taking

Easterseals’ robust mail program, one of the organization’s largest funding sources, has evolved over the years, too. The program’s impact has been massive. Easterseals was one of the pioneers in the use of mail as a main source of communication to really grow, build and market the organization.

As the nation grappled with the Great Depression and government funds were scarce for people with disabilities, Easterseals, then known as the National Society for Crippled Children, had to find a way to survive on its contributions and unfortunately those donations weren’t generating enough income to support the work that needed to be done.

In the 1930s, Easterseals embarked on a new means of fundraising: an annual sale of seals, small decorative stamps. What started off as a new approach to fundraising turned into a juggernaut of a campaign that has profoundly impacted the way the world viewedeople with disabilities. The seals were sold around Easter time as a way to represent rebirth, new growth and renewed life.

Over the years, the Easterseals mail program has changed and gradually adapted to evolving donor expectations and trends. At the start of the mail program, all Easterseals affiliates managed the program at the local level; then in the 1980s, the national headquarters centralized the program for consistency and economies of scale, allowing for more funds to go back to supporting programs for people with disabilities. Donation processing was once all done by hand and manually entered in a database which could take months. Today, mail is processed within 24 hours and the database updates within 48 hours.

The success of the seal campaign through the mail was revolutionary. In addition to raising funds, the seals also raised awareness of the issues facing people with disabilities, as well as the kinds of supports available to them. In the years following the first seal appeal, and continuing since then, increasing numbers of people have sought help for their disabilities through Easterseals.

From the very beginning, the popularity of the seals spurred unprecedented expansion of Easterseals as well as the growth of a nationwide movement on behalf of people with disabilities. The very successful seal campaign gave way to a nickname given to The Society by the public, which eventually led to a name change in 1967, where the Society formally adopted the name Easterseals.

Easterseals annual “Seal Appeal” and other direct mail and integrated marketing campaigns continue to be a major fundraising source. Much like when the campaign first ran, the funds raised are necessary for Easterseals to continue to grow and help so many families. Through its inception, the iconic direct mail program has raised hundreds of millions of dollars to support the organization’s mission.

While the seals have no monetary value, they have become universally recognized as tokens of a community service program the public is willing and interested in supporting. They represent a commitment to improve the quality of life for people with disabilities.  Most importantly, the seals have given all of us the opportunity to have a part in the ongoing process of empowering people who have disabilities.

1919: Tragedy leads to inspiration: Ohio businessman Edgar Allen founded the National Society for Crippled Children (the Society) in 1919, the first organization of its kind. Following a personal tragedy, he dedicated his life to improving access to health care for children with disabilities.

During the 1920’s state funds for people with disabilities were still scant or non-existent. That meant The Society had to survive on its contributions, which came mostly from Ohio Rotary clubs and individual memberships. But those contributions weren’t generating enough income to support the work that needed to be done. In its first 10 years the National Society for Crippled Children had raised and spent only $200,000, an average of $20,000 a year - not enough to meet its goal of helping children with disabilities all over the world.

To raise more money for children with disabilities, Paul H. King, then chairman of The Society’s finance committee (and successor to Edger Allen) suggested an annual sale of seals - small decorative stamps, like miniature posters to help support the society. Only eight affiliates decided to give this concept a try and launched the first Seal Appeal campaign in the spring of 1934.

1934: The Birth of the Seal: The National Society for Crippled Children launched its first Easter “Seal” fundraising campaign. Donors placed the seals on envelopes to “seal” their correspondence to show support for the organization’s vital services. The first campaign raised about $47,000 in its inaugural year. The success of the seal campaign that first year provided a great base for the campaign to grow, in fact it still continues to be successful today.

1940s: The Seals Spark Unprecedented Awareness: By the 1940’s hospital admissions of people with disabilities had almost doubled and enrollment in special education classes more than doubled as did the number of teachers in special education schools. The entire field of rehabilitation began to gain acceptance and stature, and the numbers of orthopedic surgeons, physical and occupational therapists and other rehabilitation professionals significantly increased.

1952: A time of new growth and renewed life: With the growing popularity of the Easter “Seal” campaign, The Society officially incorporates the Lily into the logo. The lily, which is seen around spring/Easter time, represents new life and rebirth. This symbol offered hope and new opportunities in life for the people The Society served.

1955: President Eisenhower helps The Society launch the annual Easterseals campaign (first president to do so!). This set off a tradition that carried on for decades, featuring a president with an Easterseals representative.

1983: Easterseals appeals: As the annual Easter “Seal” campaign becomes so successful, the organization adds an additional 13 unique mail appeals. These mail appeals including the iconic Easterseals appeal, aided in the initial success of the overall direct mail program. These collective efforts were a way to build toward the passing of the Americans with Disabilities Act (passed in 1990). Easterseals was on the forefront of this act using posters and mail as a way to enhance the passing of the ADA and rallying support behind ensuring accessibility.

1992: Easterseals introduces the “Easterseals Calendar” campaign to the direct mail program, where donors receive a gift of a wall calendar when making a donation through the mail. The cover is always a lily, which is a nod to the logo, and is much anticipated by our donors every summer when it hits mailboxes. 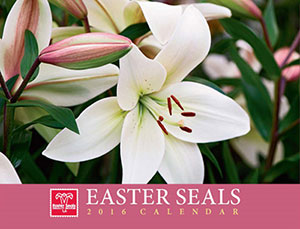 2010: Easterseals introduces its “Easterseals Blanket” to the direct mail program, where donors receive a gift of a fleece blanket after making a donation through the mail. The blanket design is chosen by an online vote for the Lily of the Year, which also appears as a seal stamp. 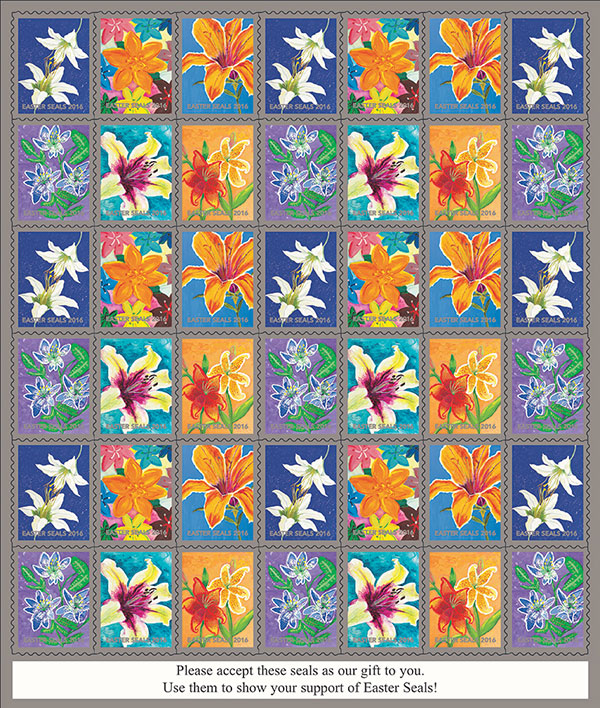 2015 and beyond: The mail program generated more than $29 million in revenue last year and more than 39 million pieces of mail were sent. Because of the awareness and support raised through the direct mail program and other integrated marketing channels, Easterseals has a presence in every state in the United States and provides support to over 1.4 million individuals and family members. Formally in 2016, “Easter Seals” changed its look, feel and voice as well as adding a new spin onto its name, Easterseals.

Easterseals continues to make profound and positive differences in the lives of people every day and because of the public’s generous support, Easterseals has been the indispensable resource for people and families challenged by disabilities and will continue to offer support and services to people who need them.

Because of support Maurice's  story is possible….

Because of support Ben's  story is possible…

Because of support Richard's story is possible…

‹ Divine Word Missionaries up Edmundite Missions ›
Back to Top