No longer need office boys suffer from impediments of speech because of mucilage coated tongues from licking postage stamps. … In increasing numbers the large business houses … are discarding the stamp … in favor of rapidly running machines which, at one operation, seal, impress a permit number approved by postal authorities, cancel and count the letters or circulars that are fed into them.
Post Office Department, 19225

In the early 1900s, mail growth continued to outpace population growth. Mail volume more than doubled from 1900 to 1910, rising from about 7 billion to 15 billion pieces. About half of all mail originated in just a handful of cities, congesting already-crowded urban facilities.6 Post office personnel struggled to sort and deliver ever-growing volumes of mail with limited staff and space. The introduction of precanceled stamps, mailing permits, and postage meters helped speed delivery by reducing the number of times that large mailings needed to be handled. Mailers who used these time-saving methods of paying for postage were also expected to comply with "all reasonable requests" of postmasters for presorting their mail "into States, counties, cities, etc."7 In some cases this mail could be taken directly to mail trains for dispatch.

Beginning in 1901, Chicago firms that mailed more than 10,000 pieces a week could use precanceled postage stamps for third- and fourth-class mail.8 Mailers in other cities could also request permission to use precanceled stamps, which were permitted on First-Class Mail beginning in 1924. Mail with precanceled stamps bypassed facing and canceling at the post office, saving postal clerks hours of labor. "Facing" mail — orienting each piece to put the stamps in the same relative position — and canceling mail — postmarking each piece and marking through stamps to prevent their reuse — were time-consuming tasks. In the Chicago Post Office, canceling mail was so time-consuming that in 1914 Thomas F. Flaherty, secretary of the National Federation of Postal Clerks, called for all mail order firms to use onlyprecanceled stamp on their catalogs. In its monthly magazine, The Union Postal Clerk, the federation noted that "a clerk working industriously for eight hours could cancel the stamps on not more than 5,000 packages," and complained of “a period of protracted overtime in the Chicago Post Office” and of the “suffering and hardship” imposed on clerks by “the annual reign of terror” which was the spring catalog mailing season.9 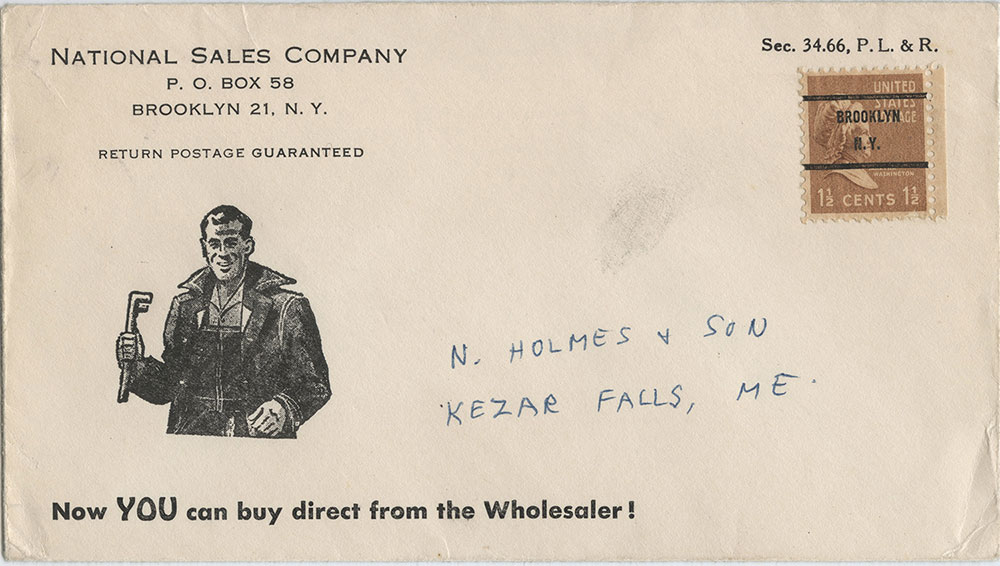 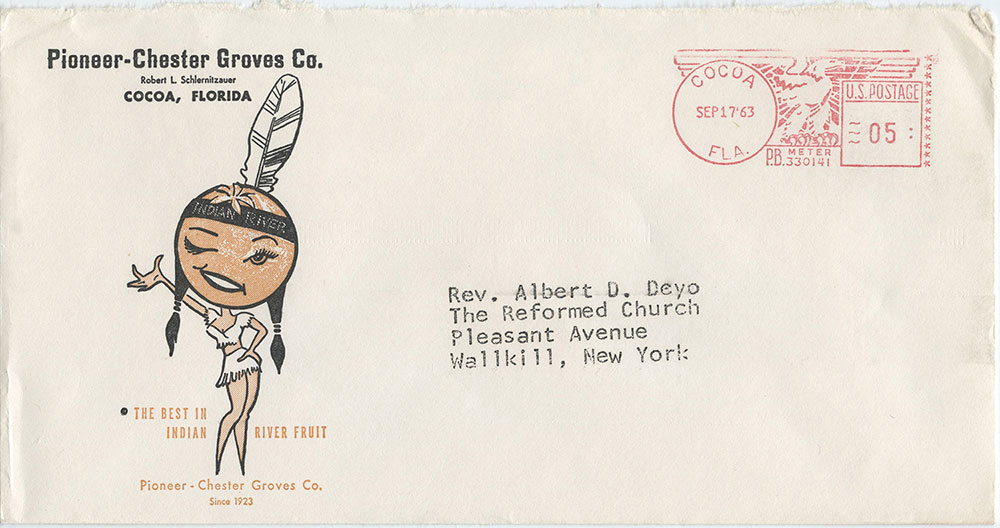 Mailing permits, first authorized in 1904, eliminated the need for stamps altogether. In lieu of a stamp, the word “Paid” was printed in the upper right corner of the envelope along with the permit number and the city of mailing. Mailers brought a minimum number of permit-imprinted identical pieces of third- or fourth-class mail directly to the post office, for mailing. Because each piece of mail was identical, postal clerks could weigh all the sacks of mail and then divide the total by the weight of a single piece to determine the total number of pieces; they multiplied this number by the postage rate to determine the amount of postage to be collected for that particular mailing. Mailing permits relieved mailers of the need to apply stamps to each piece, and spared postal clerks the need to cancel and postmark the mail. Beginning in 1920, postage for identical pieces of First-Class Mail could also be paid via permit imprints; most pieces of First-Class Mail, however, varied slightly in weight.

Postage meters — first tested by inventor Arthur Pitney in 1903 and authorized for use in 1920 — provided mailers with a means of stamping and counting, piece by piece, large amounts of non-identical First-Class Mail. Postage meters printed the name of the post office, date of mailing, and amount of postage on each piece of mail. The meters were developed and maintained by private companies — the largest was the Pitney-Bowes Postage Meter Company — which leased the machines to individual mailers. Mailers took their leased postage meters to the post office, as needed, where authorized postal employees "set" the meters for a certain amount of postage, upon advance payment by the mailer. Postal employees sealed the unit, so it could not be tampered with, and the unit automatically locked when all the prepaid postage had been used.

Precanceled stamps, mailing permits and postage meters made it easier for businesses to send large amounts of mail, and easier for post offices to deliver it. Although mail volume dipped during the Depression, it recovered during World War II and swelled to unprecedented heights in the postwar economic boom. 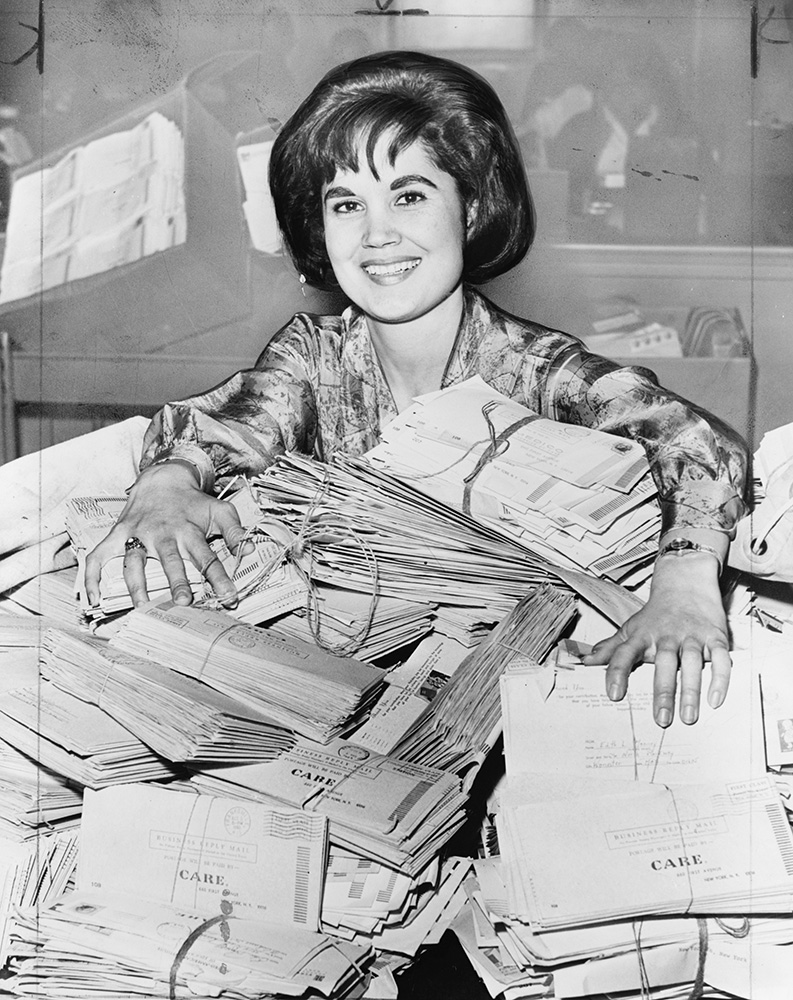 CARE Worker with Mailed Donations, 1963
In 1952, Congress authorized lower postage rates for mail sent by nonprofit organizations, making it easier for charitable organizations to fund their missions. CARE was established in 1945 to fight global poverty.

6) The 1900 Annual Report of the Postmaster General, on pages 244 to 249, includes a chart showing that in an October 1899 survey of first-class post offices, five cities accounted for 53 percent of all mail, by weight — New York, Chicago, Boston, Philadelphia, and Washington, D.C.

7) Presorting mail was the sixth of eleven "conditions upon which mailings of third and fourth class matter will be accepted," which were printed on the first edition of Post Office Department Form 3601, "Permit to Mail Third and Fourth Class Matter Without Postage Stamps Affixed, On the Prepayment of the Lawful Postage Rate in Money, as Provided by the Act of Congress Approved April 28, 1904" (copy in files of USPS Historian). Presorting was sometimes done under the supervision of postal clerks, and sometimes by postal clerks themselves, working in companies’ mailrooms. When a Chicago mail order firm mailed out a record-breaking 6,000,000 catalogs in 1909, 25 postal clerks worked “for some time” in its shipping room, sorting the catalogs into labeled sacks (Chicago Daily Tribune, March 16, 1909, 13).

8) The requirements for using precanceled stamps later changed. Postmasters in a few U.S. cities supplied precanceled postage stamps to customers as early as the 1870s, apparently on their own initiative.

‹ The Growth of the Mail up 1960s: Reaching out to Industry to Level Mountains of Mail ›
Back to Top