Benjamin Franklin, one of the most prominent Founding Fathers, has been the subject of many portraits and sculpted busts. Postage stamp designers have relied on these artistic depictions when commemorating Benjamin Franklin. As America’s most prominent Renaissance man, Franklin filled many roles and held many official positions throughout his life. Most importantly to the postal history of the United States, Franklin was the first Postmaster General under the Continental Congress. At the dedication ceremony for the stamp celebrating the 250th anniversary of Franklin’s birth, Albert Robertson, the Assistant Postmaster General, emphasized the importance of Franklin to the development of the Post Office Department. His long relationship with the post is one of many reasons for his commemoration on postage stamps. 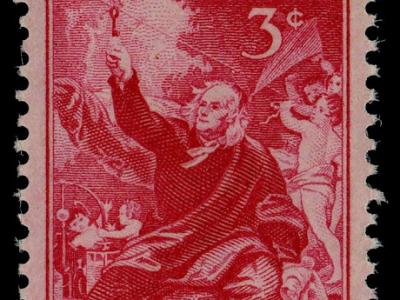