Norman Rockwell, the well-known illustrator of Saturday Evening Post covers beginning in 1916 at the age of twenty-two, serves as a prime example of an artist who used his art to honor ‘main street’ America. Rockwell's artistic talents were apparent at a very young age as he attended art classes in New York City, then the National Academy of Design, and finally the Art Students League.

Richard Sheaff, an art director at the Postal Service in 1993, wrote an inscription that appeared on the Norman Rockwell postage stamp souvenir sheet when the design and text was first released to the press in December of 1993. Sheaff wrote, “For half a century, artist Normal Rockwell captured the essence of the American pageant in his paintings of common folk in everyday scenes…” His statement accurately describes Rockwell’s art displaying the emotion and character of Americans from soldiers to astronauts. Stamp designers selected this art to celebrate not only Rockwell himself, but also the people of America. 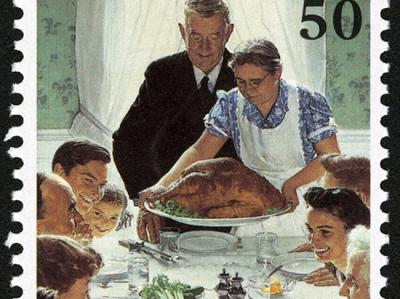