Belinda Mulrooney - The Richest Woman in the Klondike

Belinda Mulrooney was a favorite subject of newspaper and magazine writers. Scribner's Magazine called her the "richest woman in the Klondike." In an interview she gave in 1962, Mulrooney said that reporters paid attention to her because "the truth is there wasn't enough to write about those long winters in Dawson." Reporters, she claims, wrote about her with such compliments because she fed and housed them while they were up in the gold fields. "Give us a room, Belinda," she noted they would say, "a few good meals and credit at the bar. Take it out in write-ups. We'll write a real story about you."

Of all the legends associated with Belinda Mulrooney, (and there are many), one that typifies her bravado and self-assurance was oft told by the woman herself. According to Mulrooney, when she finally reached Dawson and the gold fields after months of hard travel, she tossed her very last coin, a 25-cent piece, into the Yukon River for luck. She was 26 years old.

Belinda had more than just luck on her side—she was determined to become a success. Mulrooney, the daughter of a Pennsylvania miner, had left home when at 21. She displayed her entrepreneurial bent from the very beginning. She ran a sandwich stand in Chicago during the Colombian Exposition. From Chicago she moved to San Francisco where she ran an ice-cream parlor. When the parlor burned down, she got a job working as a stewardess for the Pacific Coast Steamship Company.

There had been gold strikes in Alaska and the Yukon before August 1896. These smaller strikes had attracted those who had paid attention. An earlier strike in Juneau, Alaska, encouraged Mulrooney to head north in 1896. While there, she worked in a small clothing store. When Mulrooney heard about the fabulous new gold strike in the Klondike, she did not waste any time.

Thinking ahead, she theorized that it would be the niceties, and not the necessities of life that would bring a fortune in the remote and barren gold fields. She left for the Klondike with may of the necessities other stampeders were bringing, but with items few had the time, money or will to carry - silk underwear, bolts of cotton cloth and hot water bottles. She chose well—and made six times her cost back in profits. Mulrooney used that money to open a restaurant in Dawson, charging between $1.50 - $4.50 for a meal.

Belinda soon turned her attention to the gold fields themselves. Instead of trying to dig gold out of the ground, she mined the miners. Catering to the crowds in the gold fields, 15 to 30 miles away from Dawson, Mulrooney built a two-story roadhouse at the junction of the two most profitable creeks—Bonanza and El Dorado. 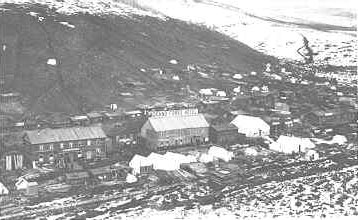 Mulrooney built her Grand Forks Hotel in the middle of the gold fields, near Bonanza and El Dorado Creeks.
Photo courtesy of Special Collections Division, University of Washington Libraries, Child 3

Her Grand Forks Hotel and restaurant was an immediate success. Always one to recognize opportunity, Belinda ordered that sweepings from the floors be run through a sluice—bringing her as much as $100 a day from the gold dust that fell from miner's pockets and clothing. In addition to the traditional profits from the hotel and restaurant, Mulrooney was able to profit from information gathered from miners sitting around talking about the digs. By the end of the year, she owned five mining claims either outright, or in partnership. 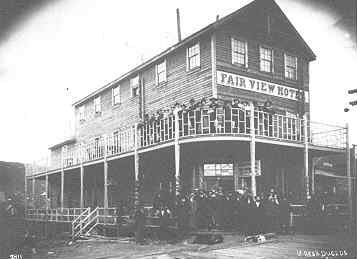 With the success of the Grand Forks Hotel, Mulrooney was able to buy a spot of land in Dawson on the corner of Princess Street and First Avenue. She sold the Grand Forks Hotel for $24,000 and put her profits into creating the most impressive building in Dawson. Only the best would be good enough for Mulrooney's new hotel.

Everything had to be ordered from Skagway or Seattle. Freighting such exquisite goods over the passes or up the Yukon River and into Dawson in 1898 was an achievement in itself. Mulrooney ordered cut glass chandeliers, silver and china linens and even brass bedsteads for her rooms. On July 27, 1898, the Fair View Hotel opened to enthusiastic and impressive reviews. The three-story hotel held thirty guest rooms and a restaurant. 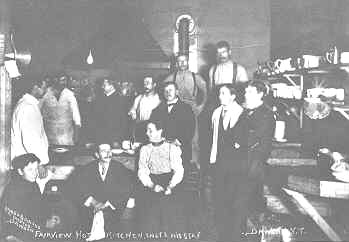 Among those who visited the hotel in its first days were Mary Hitchcock and Edith Van Dorn, who were "doing" the Klondike as tourists. Hitchcock included a description of the Fair View in her book, "Two Women in the Klondike."

Mulrooney worked hard to ensure the success of the Fair View Hotel and maintain it in grand style. She traveled down the Yukon River to Skagway to purchase the highest quality provisions and furnishings available for her showpiece. In 1899, she even sailed down to Seattle to select plate glass windows, lumber and a steam heating apparatus for the building.

Appreciating her keen business sense, a local bank chose Mulrooney to run the Gold Run Mining Company, then deeply in the red. She pulled the company into the black in 18 months. 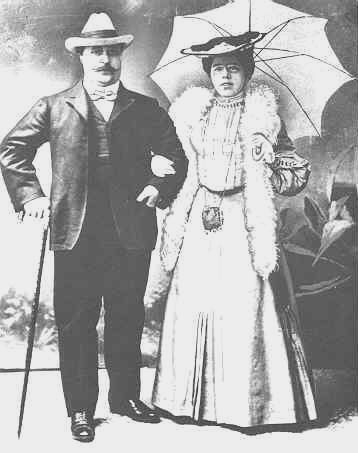 "Count" Carbonneau and Belinda not long after their marriage.
Photo from the Seattle Times

By the end of the century, Belinda Mulrooney's hotels and mines had brought her a considerable fortune. They also brought her to the attention of Charles Eugene Carbonneau, a French-Canadian by birth, he claimed to be a French aristocrat. "Count" Carbonneau, as he was known in Dawson, had gone north as a champaign salesman. Unkind tongues claimed he was only a barber from Montreal. Whatever his original circumstances, Carbonneau achieved moderate success in Dawson as a mine owner and promoter. Belinda had worked with "Count" Carbonneau on occasion in Dawson and the two were drawn to each other. Their marriage in Dawson on October 1, 1900, was the social event of the season. The pair traveled to Paris, wintering there and returning to Dawson in the summers.

But, not all was well with the couple and in the summer of 1903, Belinda returned to Dawson alone. Two years later, Charles, still living in Paris, was charged with embezzlement and fraud. By 1906, Belinda, fed up with her artificial count, divorced him. These were rough years for Belinda, aside from the strains of her disintegrating marriage, she had been sued by owners of the Gold Run Mine for improperly letting lays on mining properties. In addition, the bank holding the mine's mortgage sued her for the debt.

Understandably tired of Dawson by this time, she decided to try and build back her fortune in the gold fields near Fairbanks, Alaska in 1904. Mulrooney set up the Dome City Bank in Fairbanks. Her touch was still golden and she made a second fortune. She took her money and moved to eastern Washington state. Even though she was no longer even an artificial countess, Mulrooney wanted to live in style. She moved to eastern Washington and built herself a castle near Yakima, living there with her siblings until the late 1920s. When her fortune was depleted, Mulrooney was forced to rent out the castle. She spent the rest of her life in Seattle, where she gave interviews from time to time, talking about her life during the gold rush. She died in Seattle in 1967 at 95 years of age.

‹ Extraordinary Women up Kate Carmack - Shaaw Tlaa ›
Back to Top