Kate Carmack was born Shaaw Tlaa. Kate's husband was George Carmack, a prospector who worked with her brother, Skookum Jim, and his partner Kaa Goox, also known as Dawson Charlie. Carmack and Skookum Jim share the credit for the August 17, 1898 gold discovery that set off the great Klondike gold rush.

George had first married Shaaw Tlaa's older sister, but when she died not long after their marriage, Shaaw Tlaa took her place. George named her Kate. No official record was made of the marriage, an oversight Kate would live to regret.

George Carmack had been orphaned at 12 and lived with his older sister for nine years before setting out on his own. In 1885 he headed north, stopping first at Juneau, Alaska, then traveled to Dyea where he met Skookum Jim. George, Jim and Dawson Charlie spent the next decade trading and prospecting along the Yukon River between Dyea and the mining community of Forty Mile, just north of what would become the city of Dawson. George, who was prone to exaggeration, was laughingly dubbed "Lying George" by the miners at Forty Mile.

In January 1893, seven years after their marriage, Kate gave birth to the couple's only child, a girl named Graphie Gracie. George and his family continued to roam across the Yukon territory, hunting, trading and doing a little prospecting along the way. When Robert Henderson, a fellow prospector, told Carmack that he had been getting promising results from areas around the mouth of the Klondike River, the group set out down one of the river's tributary, Rabbit Creek. On August 17, 1896, the crew found their strike. The sight, which became known as Discovery, was marked by Carmack's hand-written sign. "TO WHOM IT MAY CONCERN: I do, this day, locate and claim, by right of discovery, five hundred feet, running upstream from this notice. Located this 17th day of August, 1896. G.W. Carmack." Between them, the trio held the Discovery claim as well as claims along the creek-#1 above Discovery and #1 and #2 below Discovery.

Although the group was digging thousands of dollars of gold out of their claims, they were far from any town, and gold could not heat a cabin or fill a stomach. The winter of 1896/1897 was harsh. Until the spring thaw (when the gold could be sluiced and separated from mud and dirt), they had no means of support. So, while her husband and brother spent that fall and winter digging out their gold, Kate kept food on the table by doing laundry for other miners. 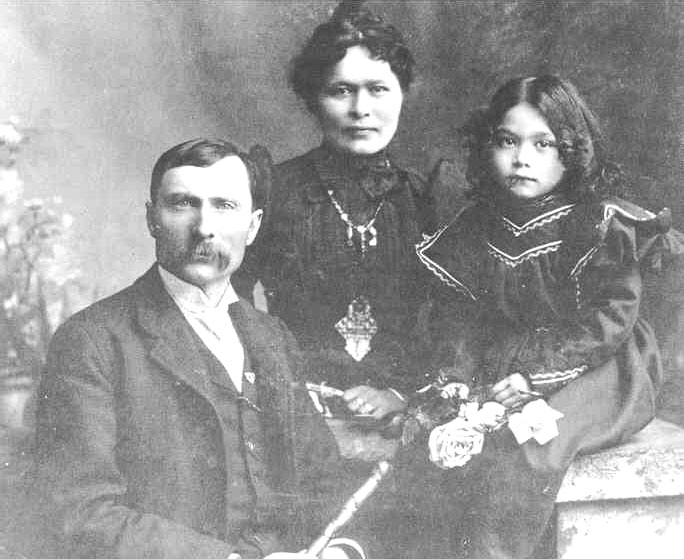 George, Kate and their daughter, Graphie Gracie.
Photo courtesy of the Yukon Archives

When spring came, the partners were finally able to collect their washed out gold. Carmack and Kate had over $100,000 from their winter's work. The couple stayed in the Klondike another year and were not among the miners aboard the Excelsior or Portland in the summer of 1897. The next summer, George and Kate left the Klondike for the "outside." They traveled to Seattle and visited George's sister Rose on her ranch in Cambria, California. Rose did not care for Kate, but seemed to take to young Graphie Gracie.

While they were in Seattle, George and Kate were the center of attraction. George rode around town in a carriage bearing the immodest sign, "Geo. Carmack, Discoverer of Gold in the Klondike." In early September the pair caused quite a disturbance when they tossed coins from their hotel roof to an ever-growing crowd.

Life away from the rest of her family and the land she knew best was hard on Kate. Her misery was self-destructive, and when she was arrested for making a public disturbance, the Seattle Times was quick to print the story. "Mrs. George W. Carmack, the Indian wife of the discoverer of the Klondike, who is probably the richest Indian woman in the world, was fined $3.60 by Judge Cann this morning for drunkenness."

George had become as unhappy with Kate as she was to be away from her home. Instead of letting her return to the north, he sent Kate and Graphie to live with his sister, Rose. George returned to Dawson and set about enjoying his "discoverer" status, becoming the life of the party and falling in love. The object of his desire, Marguerite Saftig Laimee, was a woman of questionable repute. The owner of a "cigar store," Laimee was, in fact, the owner of a brothel. Her career seemed to make no difference to Carmack and soon he wrote to Rose and asked her to send Kate back to her clan, informing them that he intended to marry Laimee.

Kate refused to be tossed aside and after consulting with friends, decided to make a legal appeal for her share of the couple's $1.5 million worth of gold discoveries. She sued for divorce on the grounds of desertion and adultery. Unfortunately for Kate, since no marriage papers had been filed, the court did not recognize its existence. George and Marguerite were married late in 1900.

George died a rich man in Vancouver in 1922. Marguerite inherited his wealth and died in California in 1949. Kate, who subsequently lost her daughter, Graphie, to George, returned to her Tagish clan. She lived off of a government pension in a cabin that Skookum Jim had built for her in Carcross. In 1920, Kate died in Carcross during a flu epidemic. She was 63.