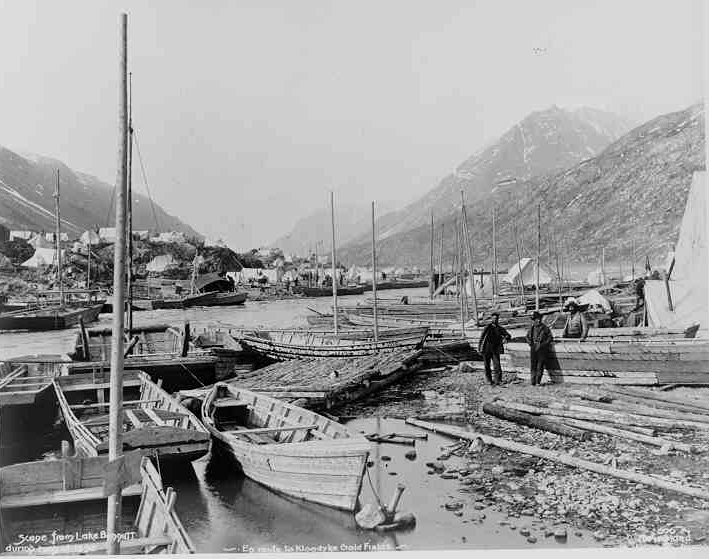 Photograph of boats at Lake Bennett taken just after the ice has broken in May 1898. Photo courtesy of Special Collections Division, Washington Libraries, Goetzman 600

After a long winter's wait, the Yukon River ice broke on May 29, 1898. Thousands of those who had camped and waited by Lake Lindeman and Lake Bennett were ready to head down what was universally accepted as the easiest portion of the journey to the Klondike. Eight hundred boats set out down the Yukon River that day. They were the leading edge of a massive flotilla that would grow to over 7,000 boats holding 30,000 restless and hopeful stampeders. 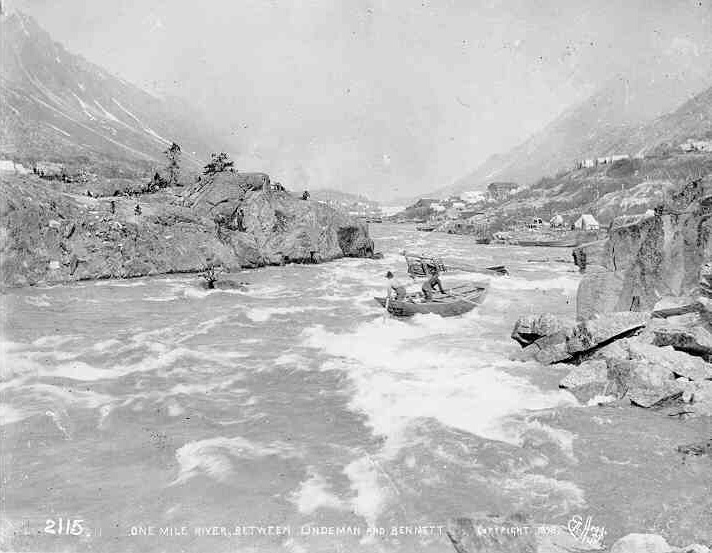 Stampeders steering their boat through the rapids of One Mile River between Lake Lindeman and Lake Bennett. Photo courtesy of Special Collections Division, University of Washington Libraries, Hegg 21156

The Klondikers had worked hard all winter and spring to build boats to carry them down the Yukon. The forests surrounding Lake Lindeman and Lake Bennett were stripped bare in the frenzy. The boats reflected the abilities of their builders, from well-crafted and designed craft to rickety scows that capsized and sank only a few short miles after being launched.

Many of those who had stayed and built their boats at Lake Lindeman believed they may have made a mistake once the ice had broken. Instead of crossing the one mile distance between the two lakes over ice in the winter, they now faced some dangerous rapids.

The North West Mounted Police assigned a number to each boat, carefully recording the names of the passengers—in order to facilitate notification of next of kin. Such precautions were the result of authorities having no way to ensure proper identification of bodies retrieved after their boats had capsized. In the first days of the rush down the Yukon River over 100 boats were torn to pieces in the White Horse Rapids, dragging at least ten to their deaths. Those who had survived with their lives lost most of their supplies and were trapped between the horrors of the Coast Mountain passes and the unknown world of the gold fields. 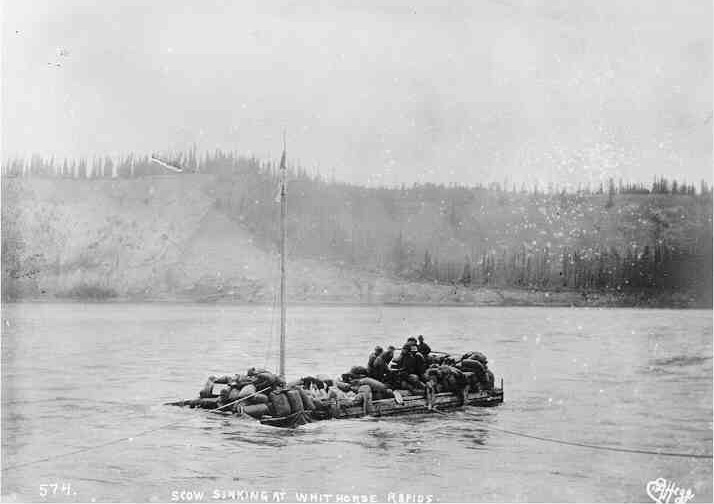 Treacherous Miles Canyon preceded White Horse Rapids, the most hazardous portion of the Klondikers' river journey. In the center of Miles Canyon, invisible until the boats were almost in it, was a twirling, wild whirlpool. As the argonauts congratulated themselves on bypassing the whirlpool, they may have noticed the canyon narrowing to almost a third of its original size, squeezing the water flow into a briskly moving funnel.

The White Horse rapids were so dangerous that the North West Mounted Police refused to allow any more boats down them unless there was an experienced pilot aboard. Boats lined up above the rapids waiting to hire an available pilot. One of those who was to make a living as a Yukon River pilot was a young adventurer, Jack London, whose tales of the far north and the gold rush are still popular today.

"A view of the rapids must first be had [before setting out]. After turning to the left the river swings again to the right through a gorge of basalt similar to [Miles] Canyon but only twenty to thirty feet high and several times its width. For a quarter of a mile it lashes itself into a perfect fury, and then, with a jumping and tossing, it bursts through a gorge a span wide with banks level with the wide, generous river." 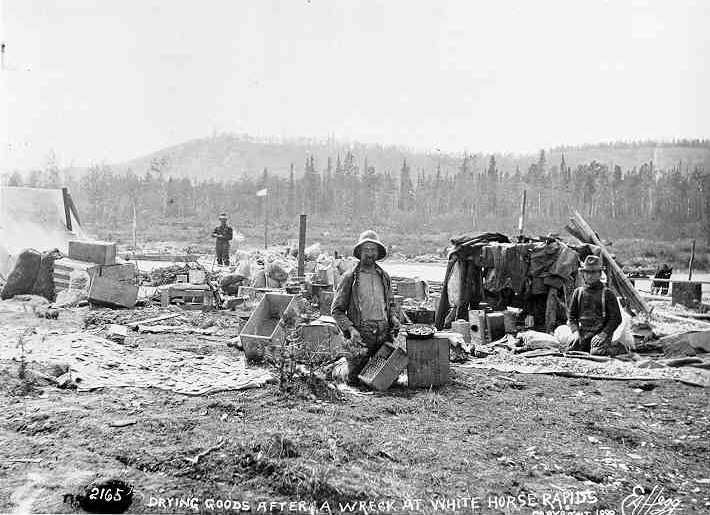 A stampeder drying the goods he has rescued from the Yukon after his boat sank in the White Horse rapids. Photo courtesy of Special Collections Division, University of Washington Libraries, Hegg 719a

The Mounties also asked women and children to get out of the boats before they were launched down the rapids and walk along the banks of the Yukon to below the rapids where they could board their boats and continue down the river. Not all women walked around the rapids. Emma Kelly a reporter for the Kansas City Star, was one of three female correspondents who had been sent to cover the gold rush. She insisted on riding the rapids not once, but twice. Unlike those who feared for their goods and future, Kelly saw the trip as an adventure and the rapids a wonderful thrill. In a piece written in 1901 for Lippincott's Monthly Magazine, she said, "I do not know when I ever enjoyed anything so much in my life. . . Wild waves rocked and rolled our boat and occasionally broke over us. The spray rose so thick and high we could not see the shore, the very air seeming a sea of misty spray. It was simply glorious. All too soon we rowed into comparatively smooth yet rapid water. A few more strokes of the oars sent us to the shore and the ride was over, leaving a sensation never to be forgotten."

September 10, 1897
"Took the opportunity during the dinner hour to walk down to the head of the White Horse Rapids, two miles below the canyon. The river makes an abrupt turn right at the head of the rapids, making it difficult to strike the crest. Anyone who is ambitious to shoot the rapids, except as steersman, is advised to forego inspection of them in advance, as the sight in most cases results in a decision to make the portage instead. The rapids are about half a mile long, and the immense volume of water, with swirling and high-breaking waves, sweeps down the incline at a speed of 15 miles an hour.

The river, which is 300 feet wide at the head of the rapids, contracts to 40 at the foot, where the confined waters rush through the narrow gateway with foam-crowned turbulence and then sweep on with a seven-mile current for a few hundred yards, finally resuming their placid course."

Taken from Sam C. Dunham's report on the Alaskan gold fields for the U.S. Department of Labor, 1897. 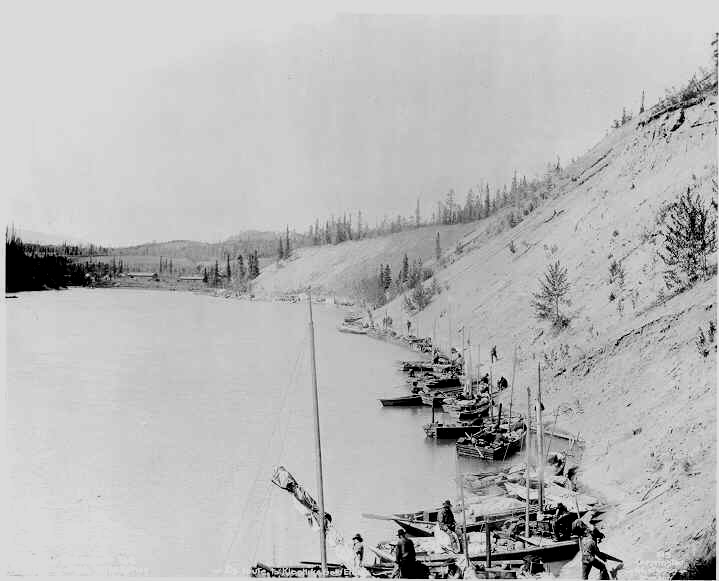 Not everyone was in a rush to brave the fierce water and soon a small town known as Canyon City came to life at the bend in the river above the rapids. Boats lined up as people waited for their pilot, or better conditions, or even the courage to run the rapids. An entrepreneur named Norman Maccaulay decided he could make money running goods along the side of the river and built a wooden rail tramway that ran to the foot of the rapids. For $25, stampeders could load their boats and outfits onto the trams and take the easy way around the savage water. 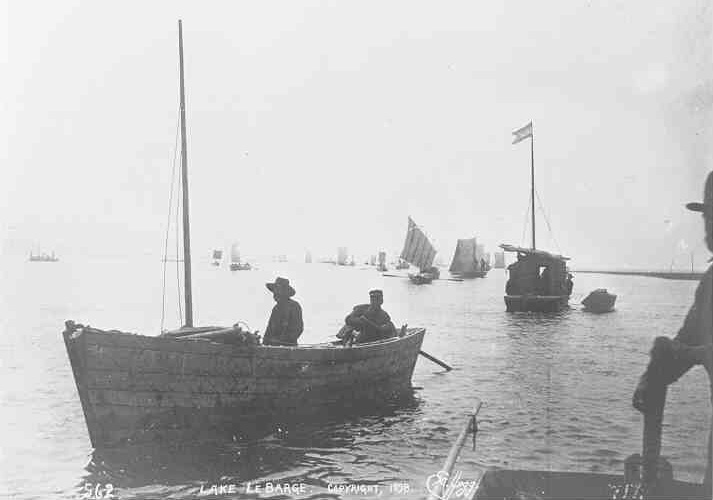 Further down the Yukon the boaters had a smooth ride up to a portion just below Lake Laberge known as Thirtymile. Here, the clear, blue water hid a swiftly moving current that pulled dozens of boats into rocks in the channel. After that, only Five Finger Rapids remained. It was an easier way than White Horse Rapids, and most who had survived the most brutal portion of the river were no longer intimidated by the smaller rapids. As long as the stampeders could keep steering their boat along the Yukon and avoid the many side channels that led away from the gold fields, the rest of the ride down the Yukon was pleasant and enjoyable. Soon the crowd found themselves at Dawson, where the Yukon and Klondike Rivers met. From here, the gold fields were only a few miles away.

Along the Yukon River, just south of Dawson September 15, 1897 "A register is kept at the store of those passing down the river. There are 1,876 names on the register today, and about 500 have been counted who passed without landing, making a total of about 2,400 who have gone to the new gold fields by this route during the present season."

Taken from Sam C. Dunham's report on the Alaskan gold fields for the U.S. Department of Labor, 1897, before the bulk of the rush.

‹ Bennett and Lindeman: Tent Cities on the Lakes up Mail and Mail Carriers ›
Back to Top